In spite of inevitable rationalisation, this station has managed to retain its dignity, boasting structures which are over 120-years of age. Hever came into use on a stretch of double-track, little over 12-miles in length, running from Hurst Green to Ashurst, providing the LB&SCR with a more direct route between London and Tunbridge Wells. The line had been promoted by the nominally independent ‘’Oxted & Groombridge Railway’’, and was formally sanctioned on 11th August 1881. The LB&SCR took over the scheme in 1884 and eventually opened the first part of the line, that section between Hurst Green Junction and Edenbridge (Town), on 2nd January 1888. The remaining stretch to Ashurst Junction was brought into use for regular passenger traffic on 1st October of the same year, Hever opening at this time. The LB&SCR’s half-yearly report, ended 31st December 1888, showed the company’s capital account to be overdrawn by £348,967 (about £28,800,000 at 2009 prices), attributed mainly to the construction of the Oxted & Groombridge line.

Architecture along the line was standardised, and evidently little expense was spared. A look at other LB&SCR branch lines shows that for even the most rural of locations, the company provided substantial structures, worthy of large towns rather than sparsely populated villages. Indeed, this was a requirement at times forced upon the LB&SCR by influential landowners, as a condition of building the line. Furthermore, a number of these grand stations were leftovers from the small independent concerns which originally promoted lines, but were subsequently swallowed up into the LB&SCR. The station at Hever was situated approximately a mile west of its namesake; the latter was a fortified Tudor house, which utilised the remnants of a 13th century castle. Two platforms came into use either side of the double-track, and the main building was to be found on the ‘’down’’ platform. This was a splendid red-brick affair, incorporating the two-storey-high Station Master’s house and the single-storey booking office. Sash style windows were housed within frames frescoed with stone, and the various sections of pitched roof were slated. Attractive canopies were installed on both platforms: these were 100-feet in length and had hipped roofs. The canopies featured timber windbreaks at either end and that on the ‘’up’’ side was fully backed at its rear, thus they were essentially giant shelters. The platforms were linked by a lattice footbridge positioned immediately north of the canopies, and virtually identical stations came into use at Edenbridge, Cowden, and Ashurst.

The goods yard was situated behind the ‘’down’’ platform and featured a trio of London-facing sidings. In common with many goods yards of the era, the sidings could only be accessed by first performing a reversing manoeuvre into a long head shunt. One of these sidings passed through a goods shed of tongue-and-groove timber construction, whilst another served a dock platform.

Contractor Saxby & Farmer signalled the line between Hurst Green and Ashurst, and one of this company’s signal boxes was erected at the London end of the ‘’up’’ platform. This comprised a hipped slated roof, brick base, and a timber upper half. A near identical design – albeit wholly of timber fabrication – can still be seen at Wittersham Road, on the preserved Kent & East Sussex Railway. A trailing crossover existed between the running lines just beyond the London end of the platforms; a second crossover south of the platforms came into use shortly after the turn of the century.

Under the Southern Railway, economies were put in place to reduce staffing levels at the station. In 1935, the existing Saxby & Farmer signal box was taken out of use. In its place, a small lean-to structure was commissioned on the ‘’down’’ platform, underneath the canopy, attached to the main building. This comprised a brick base and horizontally-sliding windows, and housed a small lever frame. It could be manned by the station porter, who also doubled-up as the ticket office clerk, and similar rationalisation measures were put into place at nearby Cowden. Other alterations made during the SR’s tenure included the removal of the timber fencing lining the rear of the platforms and the installation of wired concrete posts in its place. The timber platform run-in boards were replaced with concrete types, but the gas lampposts of the diamond-shape were retained – the SR’s trademark Swan Neck lamps were proliferating elsewhere.

The British Railways era was one of rationalisation for Hever station, and also marked a period of severe pruning of the route. An early casualty was the goods yard, this formally closing to traffic on 26th November 1955. The timber goods shed was dismantled, but to this day the site has avoided redevelopment. The line’s usefulness as a through route between London and the Sussex Coast started to decline on the closure to passengers of the ‘’Cuckoo Line’’, between Eridge and Polegate – the final passenger trains ran on 13th June 1965. South of Eridge, the route became a dead-end stump, that section of line between Uckfield and Lewes closing to through traffic on 23rd February 1969. The alternative route from Oxted to Lewes, via Horsted Keynes and Sheffield Park, had earlier closed to through passenger trains (for the second time) on 16th March 1958. An extensive network of branch lines between Oxted, Lewes, and Polegate, had been reduced to a truncated stub at Uckfield and the short spur to Tunbridge Wells West.

In the early 1970s, structural economies at Hever saw the removal of the splendid platform canopies, their replacement coming in the form of soulless glazed shelters. Thankfully, British Rail’s rationalisation was not quite as severe as that inflicted on those stations along the Redhill to Tonbridge line, and fell short of demolishing Hever’s impressive ‘’down’’ side main building. In addition, the quaint SR signal cabin on the ‘’down’’ platform remained in use, the line continuing to employ semaphore signals. Thereafter both the station and route, although operational, were left to deteriorate. The windows in the upper storey of the Station Master’s house were boarded up in 1986, and such was the poor quality of the decaying track that a number of speed restrictions were brought into effect. Eventually, in 1988, BR finalised plans to rejuvenate the line. This involved singling the route from Hever to Uckfield, for which passing loops were provided at Ashurst and Crowborough, and the installation of two-aspect colour lights. The line became fully track-circuited, controlled from a new panel at Oxted under the ‘’Track Circuit Block Regulations’’. As a result, Hever’s cabin formally closed on 7th January 1990. Happily, over the subsequent five years, restoration of Hever’s main building commenced. As part of this, the building was extended at its southern end for little under 20-feet, the new bricks matching the existing work. In addition, the exterior was tidied up, the roof re-slated, and the building let out as commercial premises. It is in this form that the station remains today, the historic main building and lattice footbridge reminding passengers of an earlier railway age. 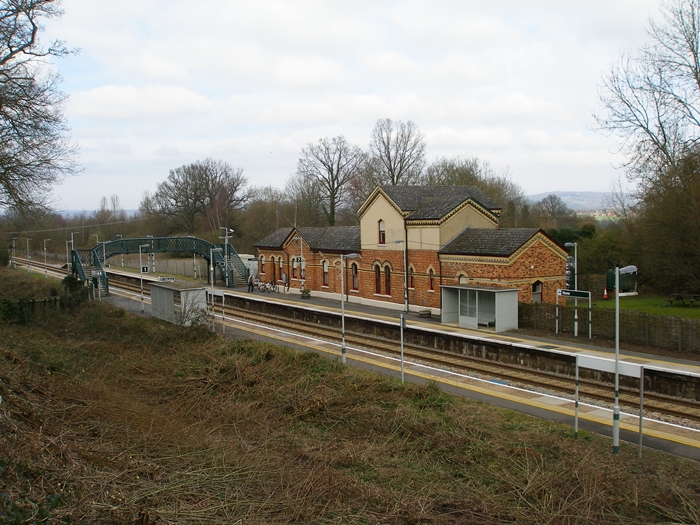 The canopies were replaced by rectangular shelters long ago, but at least the main building and lattice footbridge of the LB&SCR era remain. That single-storey section of the building on the right, attached to the former Station Master's house, was erected during the 1990s as an extension of the old building. © David Glasspool 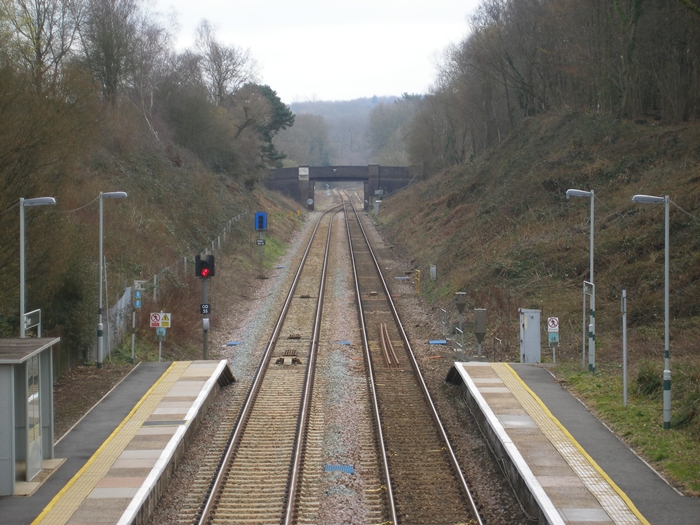 A southward view shows the line converging to single-track, which it remains throughout to Uckfield. On the left can be seen a two-aspect colour light, whilst beyond can be seen a ''Signal Passed At Danger'' indicator. © David Glasspool