Of the six intermediate stations which opened with the double-track line between Maidstone and Ashford on 1st July 1884, built under the auspices of the "Maidstone & Ashford Railway", Hothfield evolved into very much the poor relation. Located 55¾-miles from Victoria, the station setting was that of flowing fields as far as the eye could see, with a very sparse population. In The Railway News, 1st October 1898, the following was noted:

Hothfield, the last wayside station, serves a picturesque little village existing under the wing of Lord Hothfield's beautiful park. The district is, indeed, almost a series of parks, for, in addition to those mentioned, there are Surrenden, Eastwell, Chilston, Otterden, and Goddington Parks, and many other "courts" and seats, all of which deserve mention did space permit.

Lord Hothfield was the chief landowner in the area, so it is probable that he stipulated the provision of a station as a condition of allowing the railway to pass through his property. In The Official Guide to the South Eastern Railway, 1893, Lord Hothfield is listed as one of that company's directors, although as a side note, the line which ran through his land was operated by the rival London, Chatham & Dover Railway (LC&DR).

Stations on the route were built to the same standard design and, despite Hothfield being distant to any settlement, it was no exception. Two platforms were provided and a sizeable main building, two storeys high, of crème brick construction with a slated pitched roof and arched window frames - as per that which survives at Hollingbourne - was provided on the "down" side. The "up" platform, for London-bound traffic, hosted a brick-built waiting shelter, again to a design shared by the other intermediate stations along the line.

For such a minor, rural station, goods facilities were generous. Four sidings were evident on the "down" side of the line, northwest of the main building. As the below diagram illustrates, one of the sidings required a head shunt manoeuvre to access, another terminated at a dock platform, and a rail-served goods shed was also provided. The layout was controlled by a signal box located beyond the London end of the "up" platform; this had been designed and built by contractor Saxby & Farmer, the company of which provided the cabins for all the stations opened in 1884 with the line.

A decline in the station's status occurred under Southern Railway (SR) ownership in 1937 when, on 25th September of that year, it became "Hothfield Halt". Whilst this indicated Hothfield was a minor station, it was still staffed after this time, and toilets were retained on the "down" platform. However, it appears to be around this time that the "down" platform canopy was narrowed to the extent that it barely protruded beyond the walls of the main station building, not unlike that which remains at Sole Street. Similarly, the "up" waiting shelter also lost its canopy.

Worse was yet to come: a nearby bomb explosion during World War II severely damaged the main station building and thereafter, it was declared as an unsafe structure. The station building lingered on until those sections which encompassed the former Station Master's house and booking hall were demolished in 1953. Next, in the run-up to electrification, the passenger service was withdrawn, this ceasing on 2nd November 1959 - had the station remained open, presumably there would have been the expense of providing a prefabricated concrete footbridge between the platforms, as per the other intermediate sites between there and Maidstone. Public goods traffic remained a while longer, officially being withdrawn on 22nd February 1964. After closure, the signal box continued in use, controlling still extant semaphore signals, but withdrawal of goods facilities and electrification had resulted in a much simplified track plan comprising of just the two running lines, with no crossover between them.

In 1978, under Section 8 of the Railways Act 1974, a grant of £681,000 was made to Tarmac Roadstone (Southern) towards the cost of rail freight facilities at a new aggregate terminal at Hothfield. The grant included the provision of a fleet of wagons, laying a series of private sidings at the site, and installing facing and trailing crossovers between the running lines. The aggregate depot opened in 1980, partially on the sites of the former goods yard and an old tar works, and had the capacity to receive 3,000 tonnes of aggregate per day.

From 14th April 1984, colour lights replaced semaphore signals on the route, operated from a panel in Maidstone East signal box which controlled from Kemsing to Hothfield inclusive. Signal boxes at the intermediate stations were closed, but that at Hothfield lasted a short while longer, until 16th February of the following year, having been retained to control access to the private sidings of the aggregate terminal. 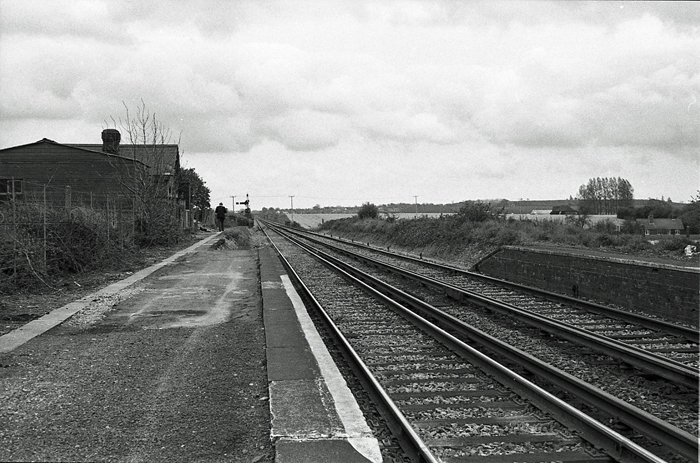 An Ashford-bound view shows the remains of the "down" side main building, which by that time just comprised of the single-storey pitched roof section common to all intermediate stations along the 1884 route. By this time, the "up" platform, on the right, had been cut back to about a quarter of its original length and similar demolition of the "down" platform was well advanced in this photograph. It was not long before the site was absorbed into an aggregate terminal and all remains lost. The conductor rails dated from electrification in 1961, the first electric services running to existing steam timings from 9th October of that year. © David Glasspool Collection