Services along the 7½-mile branch line between Sittingbourne and Sheerness commenced on 19th July 1860, but a station at Kemsley did not appear until nearly seventy years later. It was left to the Southern Railway to commission a sole wooden platform beside the single-track line on 1st January 1927, this being known as ‘’Kemsley Halt’’ from the outset. The platform had been opened primarily for the benefit of workers from the nearby Kemsley Paper Mill: construction of this had commenced in 1923, and production began in 1924. At the time of opening, Kemsley was Europe’s largest paper mill. By 1956, it comprised six wide newsprint machines churning out over 900 tons of paper daily.

The timber platform was situated on the western side of the single-track and was host to an enclosed waiting shelter of the same material. The SR’s trademark Swan Neck gas lamps were in evidence from the outset, and the platform was reached by a flight of stairs emanating from a road bridge at the northern end of the site. The station did not remain in its original form for long, and in 1938 the SR laid a passing loop at Kemsley and brought into use a second platform. The existing site was completely rebuilt using prefabricated concrete manufactured at the ex-LSWR works at Exmouth Junction. The new platforms were each 300-feet in length: that on the ‘’down’’ side was reached directly by a flight of stairs from the above road bridge, whilst the ‘’up’’ side surface had a public footpath running directly behind. A track foot crossing at the northern ends of the platforms also existed, and the rebuilt station formally came into use on 26th June 1938.

The passing loop and signals at Kemsley Halt were controlled from a lever frame located on the ‘’down’’ platform, within the ticket office. The latter was brick-built with a slated pitched roof, and it was here where the clerk doubled-up as a ticket-issuer and a signalman. This was an economy measure implemented by the SR at many stations during the 1930s. Outside of the peak hours, the lever frame could be switched out of use, during which time the station reverted to its old form of just having a single platform on the ‘’down’’ side, serving trains travelling in either direction. On the ‘’up’’ platform could be found a timber waiting shelter with a backward-sloping roof, not unlike those earlier fabrications of the SE&CR. The new platforms were adorned with Swan Neck gas lamps upon barley twist posts, to which ‘’Target’’ name signs were attached, and the platform run-in boards were of prefabricated concrete construction.

The Kent Coast Electrification Scheme was approved in February 1956, and as part of the works it was decided to double the line between Middle Junction (Sittingbourne) and Swale Halt. Works for ‘’Phase 1’’ of this scheme got well underway in 1958, and at Kemsley Halt included the lengthening of the platforms. This took place at their southern ends, using concrete cast components, and added a further 250-feet to the existing lengths. A prefabricated concrete footbridge was erected at the northern ends of the platforms, leading to the abolition of the track foot crossing and eliminating any need for passengers to change platforms by means of the road bridge. On Sunday 24th May 1959, the entire branch line to Sheerness-on-Sea came under the control of Sittingbourne ‘’power box.’’ The lever frame at Kemsley was abolished and colour light signalling came into use, the line being worked on the Track Circuit Block System. Doubling of the line left a trailing crossover 170-yards south of the platforms.

Kemsley resides 45¼-miles from London Victoria, but in what state does the station exist today? Those additions made at the time of the Kent Coast Electrification Scheme remain in use, but the SR’s platform buildings of 1938 have long since disappeared. These structures were still clearly marked on a large-scale Ordnance Survey dated 1979, suggesting they were destroyed in the following decade. The ‘’Halt’’ suffix survived electrification, but it is thought to have been dropped circa 1970, around the time that nearby Sittingbourne lost ‘’Milton Regis’’ from the platform run-in boards. 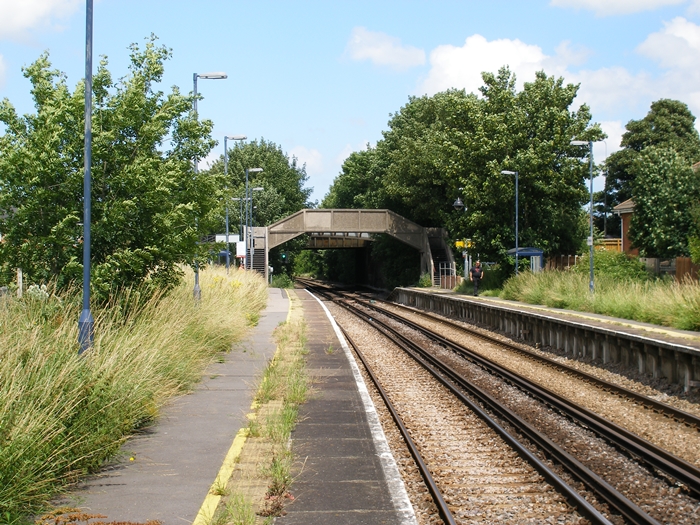 Looking north from the ''down'' platform, we see the SR prefabricated concrete platforms of 1938 and, at the

end, the 1959 footbridge of the same material. Grass has always been a feature of the two platforms. Today's 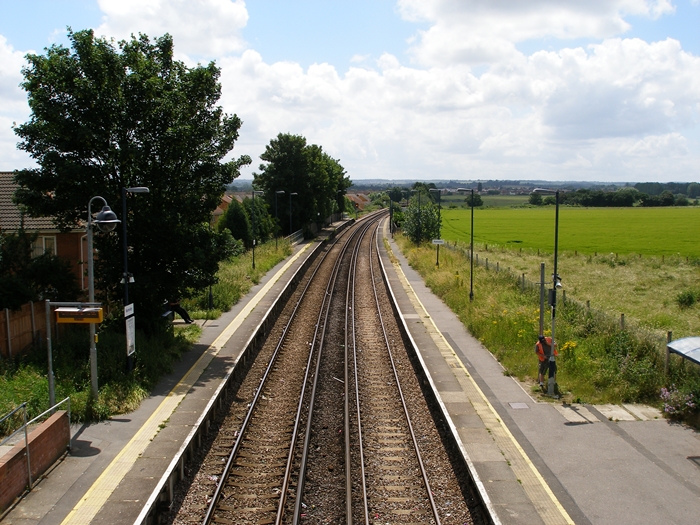 On the day of the above southward view from the footbridge, the station lampposts were being re-painted from

Navy Blue to Battleship Grey. At the far end can be seen those platform extensions added during ''Phase 1'' of