This was once a delightful country station, demonstrating the charm and antiquity which can now only be found at the likes of East Farleigh and Pluckley. Later, however, this became a decidedly depressing site situated within the capital’s inner suburbs, displaying as much refinement and elegance as the rebuilt Euston. However, a recent regeneraton scheme for the immediate environs will hopefully make this a more welcoming site.

Kidbrooke came into use on 1st May 1895 after a reluctant SER eventually decided to cooperate with local landowners and forge a third double-track North Kent route to London, this time via Bexleyheath. Taking Barnehurst as an exception (the station here being built around a deep cutting), the layouts and architecture along the line were standardised, wooden construction being used throughout. The main buildings at all stations on the route were positioned on the ‘’up’’ side and were typical single-storey SER wooden affairs; the only bricks of significance featured in the chimneystacks and, of course, within the platforms. Simple these buildings may have been, they were not without elaboration: each had attached to their platform-facing elevations an ornate arched-roof canopy, identical in design to those still in evidence at Paddock Wood.

The ‘’down’’ platform at Kidbrooke was host to an attractive curved-roof waiting shelter, as per the other stations along the line, and an identical example still survives tody at Welling. Passengers could pass between the platforms either by the road bridge at the western end of the station or by using a track foot crossing.

The SER drafted in the contractor ‘’McKenzie & Holland’’ to signal the Bexleyheath line. The SER had, until now, mostly carried out its signalling in-house, but by the end of the century was increasingly using contractors due to the amount of work required across its network. A signal box built to the contractor's design emerged about 50 yards to the north west of the ‘’up’’ platform, on the opposite side of the road bridge. Two-storeys high, with a timber upper half and a brick base, the signal box overlooked the site’s only siding, which trailed off the ‘’down’’ line in a westerly direction.

By 1908, a trailing crossover had been installed between the running lines, just west of the signal box. More significant, however, was the opening of a series of large storage warehouses and offices flanking both sides of the line in 1917. Commissioned by the Government, the warehouses' primary user was the Royal Air Force, and the entire complex occupied a huge site which stretched for 1000-yards alongside the railway. A connection between the Government's premises on the "up" side and the Bexleyheath line was made at the aforementioned trailing crossover near the signal box. The depot could only be accessed from the "down" line (thus requiring a diamond single-slip across the "up" track), and the single-track link was protected by a gate, beyond which were sprouted a multitude of sidings. The storage depot is undoubtedly a separate topic itself, but it is worth mentioning that in addition to the standard gauge sidings, the site had an extensive 2-foot gauge network.

The Southern Railway was quick to electrify ex-SE&CR suburban lines, the latter having lacked the finance to do so. This was done on the 660-Volts D.C. third rail principle previously used by the LSWR. The full suburban electric timetable along all North Kent routes to Dartford came into use on 19th July 1926. This acted as the catalyst for expansion of the London suburbs, large-scale house building taking place in the 1930s, and the populations of Bexleyheath, Welling, and Eltham rapidly increased. In conjunction with this, the stations serving those towns were rebuilt by the SR in 1931, the timber main buildings being replaced by sturdy red brick structures. Evidently, expense was spared at Kidbrooke, for it retained its timber buildings at this time and, unlike the other stations along the line, was not equipped with a footbridge.

By 1950, a trailing crossover had appeared between the running lines at the south eastern ends of the platforms. Four years later, the platforms were extended in the Eltham direction with prefabricated concrete, as part of the ten-car train scheme. At this time, Kidbrooke gained its first footbridge, also of prefabricated concrete construction, which was erected south east of the main station building. The latter received a new canopy with plain valance.

Goods facilities were withdrawn from Kidbrooke on 7th October 1968, yards at Eltham Well Hall and Bexleyheath closing on the same day. The signal box was taken out of use on 14th March 1970, when four-aspect colour lights came into use, control being transferred to a temporary panel at St Johns. Worse was to come: in 1972, the main "up" side station building and "down" waiting shelter, both of 1895 origin, were obliterated, only to be replaced by dreary single-storey CLASP prefabricated structures.

What of the Government storage depot/training centre at Kidbrooke? In 1961, the decision was taken to transfer 105 acres of Government land to the London City Council for housing to accommodate between 8,000 to 10,000 people. Five acres of the land at Kidbrooke was occupied by RAF units and it was planned to move these to existing accommodation at Woolwich Arsenal. The planned RAF move was delayed when, in 1965, the Government decided to release 1,000 acres of land at Woolwich Arsenal, again for a housing project (this later became known as "Thamesmead"). Construction of a huge council estate on former Government land on the "up" side of the railway line at Kidbrooke commenced in 1968. Completion came in 1972, the complex becoming known as the "Ferrier Estate". This coincided with the railway station's depressing rebuilding - the area had truly been transformed into what seemed to be a Soviet backwater.

In the early 1990s, the "up" side CLASP structure was at last replaced by a main building with some style. This was single-storey and of brown brick construction, with a tiled pitched roof, and followed in the footsteps of those buildings which had come into use on the Sidcup line at New Eltham and Lee in 1988.

In 2014, the ball was set rolling on yet another rebuilding of Kidbrooke station, in conjunction with the regeneration of the entire area. This included the demolition of the "Ferrier Estate", replacing it with a series of much more aesthetically pleasing houses and flats on the same site. The first sign of change at the station was the replacement of the 1954 footbridge in March 2014. On 9th of that month, the main 45-foot-long central span of a new metal footbridge was lifted into position, about 100-feet south east of its predecessor. The main station building of the 1990s was closed and replaced by a temporary ticket office located 300-feet to the south east, along the "up" platform. A new waiting shelter, bike racks, and a toilet were also provided, the work being under taken by "LJT Builders" at a cost of £105,000. 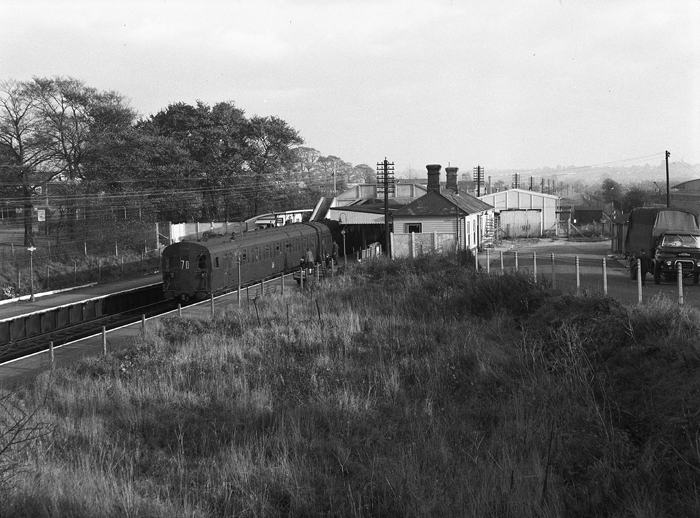 Bulleid-designed 4 EPB No. 5254, wearing all-over BR(S) Green with early "Cycling Lion" crest, is seen forming a Dartford to Charing Cross service. Swan neck lamps with barley-twist posts abound on the platform, complete with SR "Target" name signs. Behind the 4 EPB can just be seen the curved roof of the "down" side waiting shelter - although now long gone, an example built to an identical design still exists at Welling. The concrete footbridge had been in place for four years by the time of this photograph. Extensive sidings and a narrow gauge network once existed behind and to the right of the camera, these of which served a huge government storage complex. A. Jackson © David Glasspool Collection 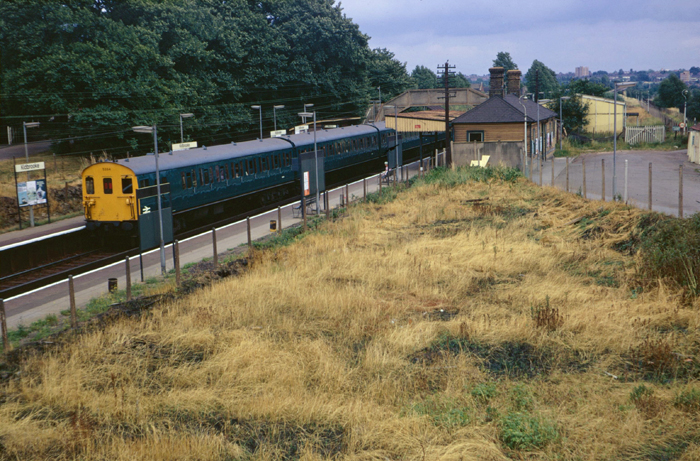 Seen from the same viewpoint as the previous photograph, sparkling BR-designed 4 EPB in all-over BR Blue, No. 5334, is seen at Kidbrooke's "down" platform in a scene which is totally unrecognisable from today. The "up" side SER main building (sporting plain BR canopy) had just two years ahead of it and, by this time, the platform lampposts had already been replaced by a modern design. © Tom Burnham 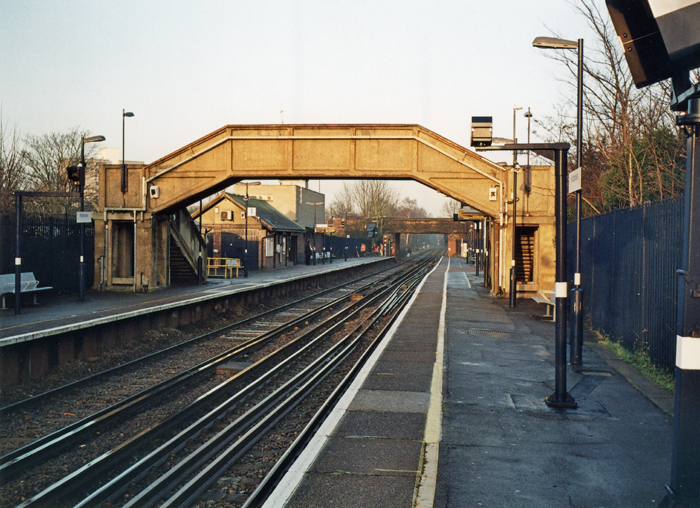 The light of the rising sun is reflected off the Exmouth Junction-manufactured prefabricated footbridge in this early morning London-bound view of Kidbrooke. The quaint appeal of the station, as depicted in the 1970 photograph, is long gone: pallisade fencing now lines the platforms' outer edges, and the trees and grass once found on either side of the line have disappeared as a result of encroaching development. The station building of the early 1990s is visible beyond the footbridge, on the left. © David Glasspool