Upon the border of rural Kent, the locality of Little Browns , which takes its name from a farm, marks the crossing of two railways: that from Redhill to Tonbridge, and another from Hurst Green to Ashurst. Nestled within the boundaries of Edenbridge, Little Browns is positioned 30½-miles from London Bridge via Redhill and 24¼-miles from the former via Oxted.

The first line built through the area was that to Tonbridge, construction having been started by the South Eastern Railway (SER) in November 1837. The first rails were delivered to the track bed for laying in May 1841 and the SER commenced through running between London Bridge and Tonbridge (then "Tunbridge") via Redhill (then "Reigate Junction") on 26th May 1842. Little Browns was mentioned as early as 1843 in Mogg's South Eastern or London & Dover Railway and Tunbridge Wells, Hythe, Folkestone, and Dover Guide, dated 1st July of that year:

At the Crowhurst excavation, which is of considerable depth, the railway is constructed for a short distance on the rise of 1 in 660, when it changes to a descent of 1 in 264, on which inclination it gains the end of the cutting, the 30 milestone, a short embankment, and Kent Brook. Crossing this, it quits Surrey, and enters the county of Kent. To the last embankment the Little Brown's cutting succeeds; that terminating near the 30¾ milestone, carries it on a descent of 1 in 264, near the 31 milestone to Marlpit Hill, where is the Edenbridge station.

Next on the scene was the route between Hurst Green and Ashurst, double-track and twelve miles in length, promoted by the ‘’Oxted & Groombridge Railway’’. Royal Assent was granted for the line on 11th August 1881, the project taken over by the London Brighton & South Coast Railway (LB&SCR) in 1884, and the line opened from Hurst Green to Edenbridge on 2nd January 1888, thence to Ashurst on 1st October.

At Little Browns, the LB&SCR route was taken through a hill, upon which had been laid the SER's line from Redhill to Tonbridge. The SER line, although atop the hill, still passed across it within a cutting. This resulted in a potentially single, continuous bore of nearly 320-yard-length, taking the LB&SCR line under that of the SER, being split into two tunnel sections. The north tunnel was 116-yards-long, the south tunnel 179-yards-long, but the two were still known collectively as "Little Browns Tunnel". A bridge was installed within the gap in-between the tunnel sections to carry the SER's tracks over those of the LB&SCR. By this time, maps referred to the SER route as the "Old Main Line", it having ceased to be the company's primary line to the Kent Coast after the commissioning of the Tonbridge Cut-Off via Orpington and Sevenoaks in 1868. 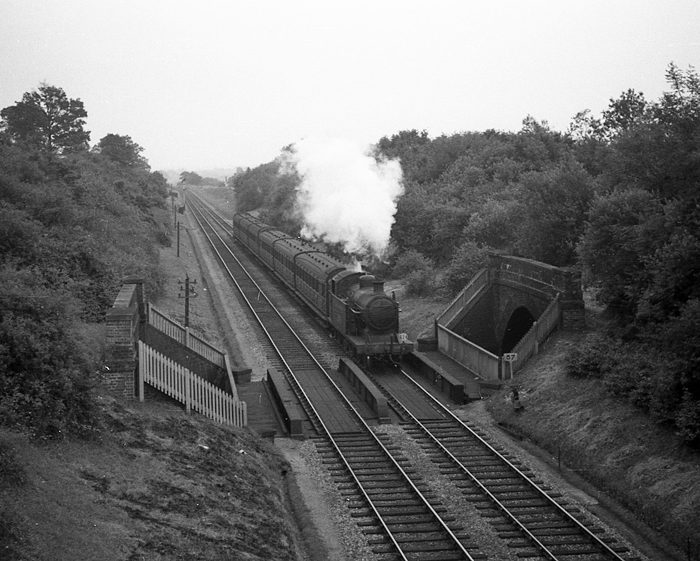 An eastward view shows what appears to be a Maunsell I1x Class 4-4-2T hauling back-to-back ex-SE&CR "Birdcage" carriage sets. The locomotive is just about to cross the bridge which passes over the Oxted to Ashurst line. Little Browns No. 1 and No. 2 Tunnels are on the left and right respectively. © David Glasspool Collection 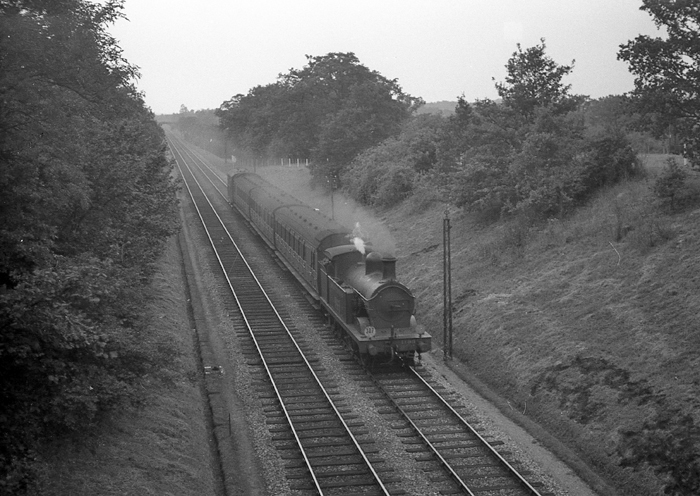 Looking west, in the opposite direction to the previous photograph, an "H" Class 0-4-4 - which appears to be No. 1533 - is seen with an ex-SE&CR "Birdcage" set, heading towards Tonbridge with a service from London Bridge. © David Glasspool Collection 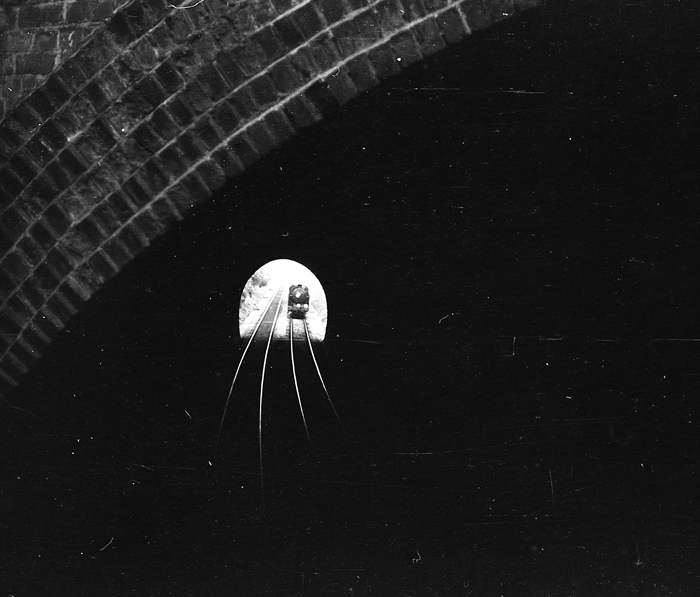 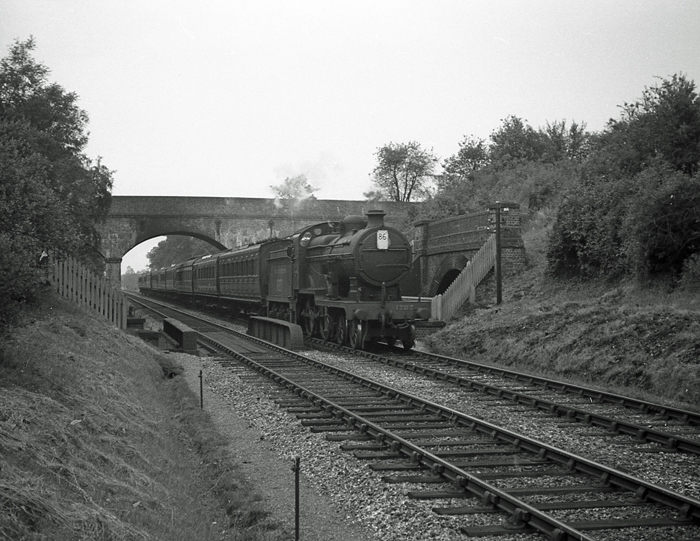 D1 Class No. 1727 is seen heading in the Tonbridge direction with a train which your author suspects has originated from Reading; the train is quite possibly for Margate. The third carriage behind the locomotive seems to be from the Great Western Railway's stock, being in that company's chocolate and cream livery. The bridge behind carries "Hilders Lane", the viewpoint of the first two photographs on this page. © David Glasspool Collection