This station has closed no less than three times during its near nine decade existence. The first company to serve the immediate Sydenham Hill area which became ‘’Crystal Palace’’ was the LB&SCR, with its 1853-authorised branch to the locality from Sydenham. In April of the previous year, the Crystal Palace had been removed from Hyde Park, where it had originally been erected as part of the 1851 Great Exhibition, and re-constructed at Sydenham Hill on an even larger scale. The LB&SCR’s branch came into use on 10th June 1854. The 1853-formed ‘’East Kent Railway’’ did not even have its first section of operational track until 1858, but expansion thereafter was swift, and a mere four years later, plans were afoot for a second branch to Crystal Palace. On 17th July 1862, an independent concern known as the ‘’Crystal Palace & South London Junction Railway’’ (CP&SLJR) was formed to undertake the construction of a rather circuitous 6½-mile long branch. This ultimately left the LC&DR’s trunk line at Brixton, passing through Peckham and Nunhead whilst heading eastwards, before assuming a direct southward heading immediately after the latter to eventually come to an end at a grand terminus.

The LC&DR began running scheduled services to Crystal Palace on 1st August 1865, leasing the route from the CP&SLJR from the outset (the company was not absorbed into the LC&DR until a decade later). Lordship Lane came into use exactly one month later, as an impressive intermediate two-platform affair. The platforms here were elevated upon an embankment; thus, they were of timber construction to keep weight to a minimum, such a practice also being used at nearby Honor Oak. The station was a somewhat grand arrangement, featuring an imposing two-storey high brick-built structure on the ‘’down’’ side. Parallels can be drawn between the building and that still in existence on the ex-LSWR network at Axminster, although the former was nearly twice its size, demonstrating a pair of large two-storey pitched roof sections. Since the line here was upon an embankment, the platforms met the first floor of the main building. The structure’s ground-level entrance would have been worthy of the Crystal Palace itself, it featuring three Cathedral-style archways supported by columns. Such elaboration was required to allow the station to sit harmonious with the nearby Dulwich College, which at the time had construction work ensuing on a vast complex of red brick Gothic buildings. The college had emerged on its present 60 acre Dulwich Common site in 1857, and had permitted the CP&SLJR to use part of the area for its Crystal Palace route. This was on the condition that the college could dictate the style of the station which resided there – that of Lordship Lane. The structure on the ‘’up’’ side was, naturally, much more modest compared to its ‘’down’’ side counterpart, but it too was architecturally intriguing. Supported by a brick base to bring it up to track level, the shape of waiting shelter here was comparable to that of a signal box, it having a neat pyramid-type pitched roof, complete with glazed sides. Both platforms were protected by flat-roofed canopies of unequal length, the slightly longer example on the ‘’up’’ surface partly compensating for the smaller internal waiting accommodation on this side.

No formal goods facilities were ever present at the site, but a pair of London-facing refuge sidings were in evidence, immediately south of the ‘’up’’ platform, trailing off this line. From about 1880, these were controlled from a signal cabin, positioned sixty yards south of the ‘’down’’ platform. At this time, contractor Saxby & Farmer, a favourite of the LC&DR’s, had been drafted in to re-signal the route, its products appearing at the branch line’s intermediate stations and at the terminus.

The first changes to the station came under SE&CR auspices. These included the replacement of the flat-roofed canopies with arguably more intricate upward-sloping types. A number of stations along the Catford Loop Line were also receiving similar treatment at the time. In addition, a trailing crossover between the two tracks was installed in-between the platforms, and those sidings south of the site were reduced to one. Despite these enhancements, the station was subject to closure with the whole of the branch on 1st January 1917, as World War I compelled cutbacks – if only temporary – to be made. The SE&CR had to make similar closures at Deptford and Spa Road two years earlier, although these two stations never re-opened to traffic under this company's ownership. The conflict ended in 1918, but service on the Crystal Palace branch was not revived until 1st March of the following year.

Further alterations were to come on the advent of the Southern Railway in 1923; this company soon put into place a programme of electrifying ex-SE&CR suburban lines. Of the third rail system, the Crystal Palace branch was one of the earliest to commence electric operation, scheduled services beginning on 12th July 1925. This formed part of the Victoria/Holborn Viaduct to Orpington electrification. In preparation for this, track rationalisation at Lordship Lane occurred: this involved the abolition of the crossover and remaining siding, making the Saxby & Farmer cabin obsolete. The platforms were also extended at their southern ends with prefabricated concrete, these eventually reaching the territory of the signal box. More drastic changes were yet to come under the SR’s tenure, but not ones enacted by the railway company itself. The station was severely damaged by German raids in 1944, which saw a V1 Flying Bomb fall on 20th June of that year, and a V2 on the 1st of the following November. Consequently, such attacks destroyed most of the southern half of the main ‘’down’’ side building, and obliterated all ‘’up’’ side waiting accommodation. Canopies were also lost during the raid, and the station became a shadow of its former self. However, during this period the station and, indeed, the whole branch, was again out of use, having been subject to closure on 22nd May 1944 during the wartime period. The line was again opened, for the third and final time, on 4th March 1946. The Lordship Lane area had suffered conventional bomb attacks previously in September 1940, although no significant damage was sustained at this time.

Sadly, the Crystal Palace had burned down on 30th November 1936, after a catastrophic fire. Unsurprisingly, traffic figures along the ex-LC&DR’s branch plummeted, and the line soon became an unimportant appendix of South East London’s suburban network. The ex-LB&SCR Crystal Palace station fared better for traffic figures, precisely because it resided on a through route, rather than a terminating branch line intended mostly for excursion traffic. The Crystal Palace branch’s last day for public use was 18th September 1954, by which time Lordship Lane was a sorry sight, devoid of all style and finesse at platform level. The ‘’up’’ side waiting accommodation had been reduced to a corrugated metal shelter, but the ‘’down’’ side main building still demonstrated its fine triple-arched entrance at ground level. 2½ years after closure, the buildings were razed to the ground. 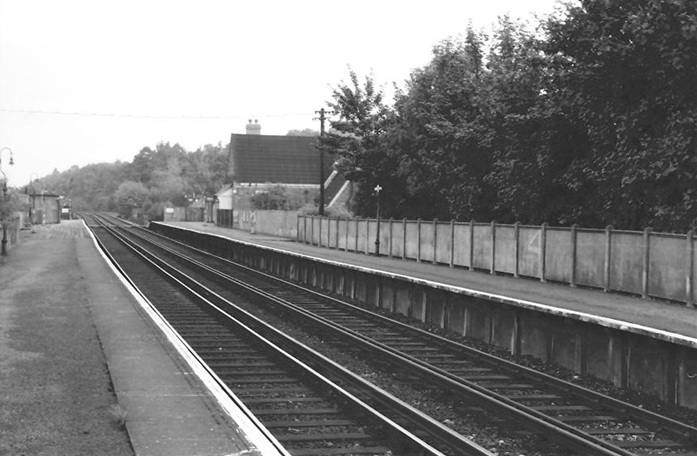 A London-bound view from September 1954 reveals a rather sorry scene at Lordship Lane. The SR concrete

platform extensions of 1924 are evident in the foreground. The original platform lengths remained wooden

until the very end. The pitched roof of the ''down'' side main building can be seen beyond the trees. Before

World War II, the structure boasted two such pitched-roof sections, but the second was destroyed by a Flying

Rocket. On the left can be seen the corrugated metal shelter, which served as waiting accommodation on the

''up'' side from 1946 onwards. The crossover mentioned in the main text was formerly situated in the immediate 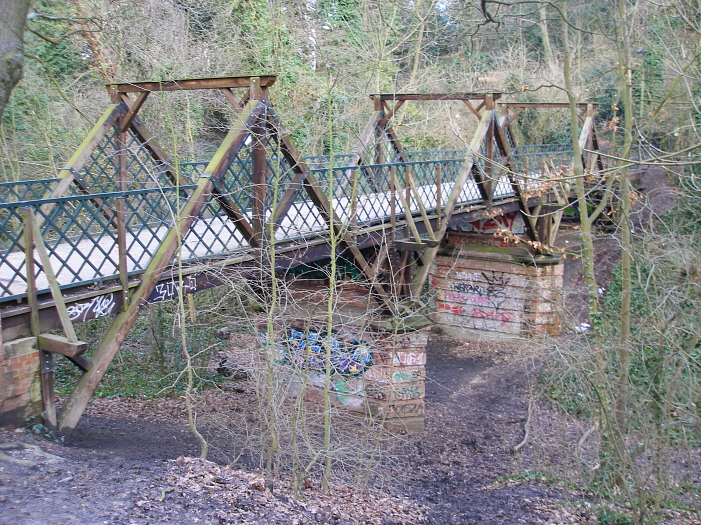 Sadly, the entire site of Lordship Lane station has been obliterated by residential development, but some railway

gems continue to exist just to the south. A section of track bed remains intact within what has become ''Dulwich

Upper Wood'', a nature reserve. Between the brick piers of this footbridge (which dates back to the opening of

the line in 1865), formerly resided the double-track route. The piers are original, but the bridge itself has been

rebuilt a number of times using new timber and metal, although remains faithful to the original design. The

Crystal Palace direction is to the right of the photograph, and this is where the next view takes us. David Glasspool 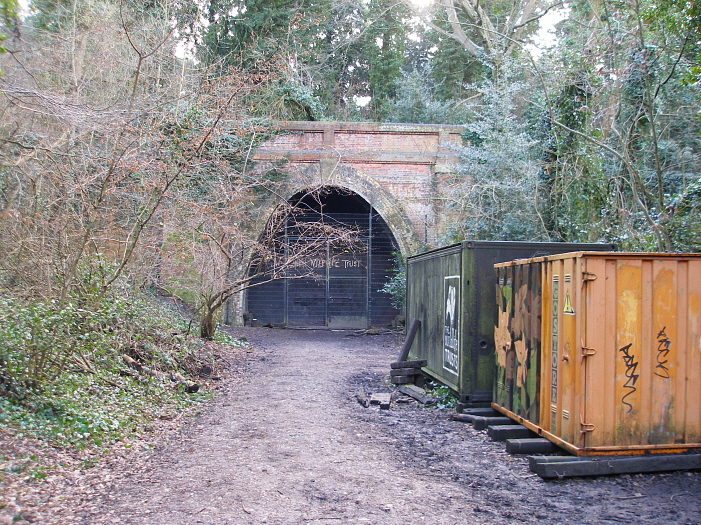 400-yards in length, and once leading to Upper Sydenham station. It joins a notable list of surviving disused

railway tunnels on the former South Eastern Division, and is now home to bats. David Glasspool