As explained within the Appledore section, the independent Brighton Lewes & Hastings Railway (authorised by an Act of 29th July 1844) had received Parliamentary permission in 1845 to construct a single-track line between Lewes and Ashford, via Hastings. The SER tried to counter this by proposing an alternative route to Hastings from Tonbridge, via Tunbridge Wells, but Parliament favoured the earlier scheme: its coastal path was of strategic importance. However, all was not lost for the SER and Parliament decreed that whilst the London & Brighton Railway would construct the Lewes to Hastings section, the SER would build the line thereafter, to Ashford. The LB&SCR, as it later became, completed its half of the line on 27th June 1846, but the SER’s task was riddled with difficulty. Whilst the Romney Marsh was as flat as a pancake, either side of the vast expanse were steep gradients, severe to the extent that the line through Appledore was not opened to traffic until 13th February 1851, some four and a half years after the Lewes to Hastings section.

Now onto the branch to Dungeness. In 1873 the ‘’Rye & Denge-ness & Pier Company’’ was formed with the intention of establishing a ferry port out on Europe’s largest shingle foreland, complete with a railway connection with the Appledore line. Despite Parliamentary approval being acquired, the optimistic scheme fell by the wayside and, subsequently, did not come to fruition. However, in 1875 the SER acquired the given Parliamentary powers for this project, and again the concept of a significant boat terminal at Dungeness came to light. History repeated itself and once again, the terminal proposals were left without implementation. Another independent concern, the ‘’Lydd Railway Company’’, revived the concept of providing a railway to Dungeness when, in 1881, it received Parliamentary approval to proceed with a single-track branch, departing the SER line at the delightfully named Appledore. The reasons behind the line were partly speculative, for it was suggested that should a port be developed at Dungeness, a direct rail link with London would be available. This was in addition to providing Lydd residents with a viable transport link to the coast, where many worked as fishermen or boat pilots. Indeed, the Lydd & Hythe Army Camp was nearby (more of later), and the shingle foreland at Dungeness would later give rise to some valuable freight traffic, such that the latter became more important than the passenger services.

The branch was opened to traffic on 7th December 1881: passengers went as far as Lydd, whilst freight was permitted to traverse the whole stretch to Dungeness. It was not until 1st April 1883 that passenger services were extended to the coast. Despite being instigated by an independent concern, Lydd station provided sufficient evidence to show that the SER was used as the contractor for the line. Despite the line being single-track, there were two platforms in evidence at this station: a loop had been installed at this point to allow trains to pass. The main building here was positioned on the ‘’up’’ side and was constituted of the same red brick used in the construction of the fine structure at Appledore. Lydd’s main building was single-storey and demonstrated a distinctive high pitched roof: it appears to have been based on those earlier examples opened on the Sandgate branch in 1874, such architecture also appearing at Radnor Park (Folkestone Central) after its 1890 rebuild. This architecture was again used on the three-mile long New Romney branch (more of later). Attached to both western and eastern elevations of Lydd’s main structure were ornate canopies of a right-angled triangular cross section, demonstrating a less common type of valance seen on SER lines. A timber shelter was in evidence on the ‘’down’’ side: whilst this lacked a canopy valance, the dimensions of the structure were greater than most shelter examples found on the SER. Its size would have been welcomed on the exposed marshes. No footbridge was ever provided, a track foot crossing instead being utilised at the northern ends of the platforms, but the Station Master was given the luxury of a large house isolated from the station, being positioned to the east of the site. Locomotives also had the convenience of watering facilities here, a tank being established just to the north of the ‘’up’’ platform.

Goods facilities here could certainly be considered extensive, reflecting the importance freight traffic once had along the route. Four southward-facing sidings trailed off the ‘’up’’ side, their connections to the running line being made south of the platform surface. A pitched-roof goods shed was in evidence here, but this sat adjacent to a siding, rather than being intercepted by a track. The shingle of the Dungeness foreland provided the main source of freight traffic: flint was extracted for use during pottery manufacture, it being applied as ‘’glaze’’ before the ceramics were baked in the kiln. Secondly, the SER was able to make good use of the shingle to ballast its tracks. Whilst the railway company had once again ignited the concept of a ferry terminal out on Dungeness, only the shingle operation materialised, complete with large pits. Cattle was another traffic carried along this bleak branch line and consequently, pens were incorporated within the goods yard at Lydd. 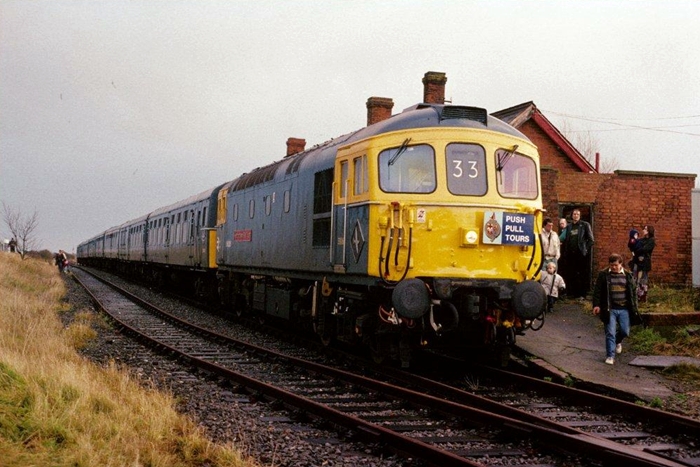 and 417. The return leg to Ashford is seen above, at a time when the run-a-round loop was still in evidence. 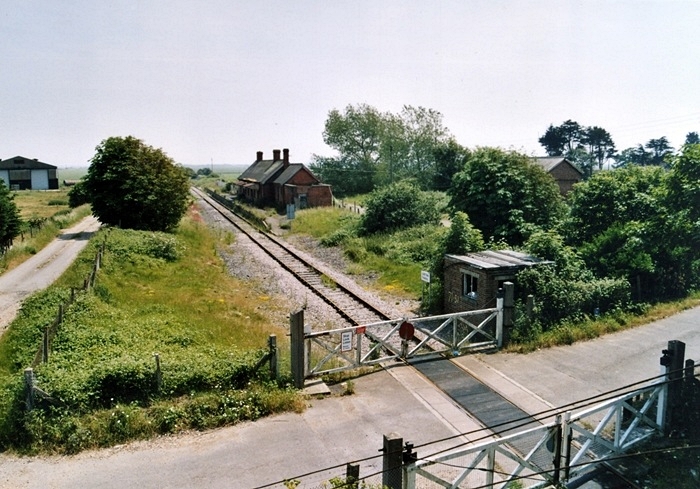 A general overview of the site looking south reveals the main station building and platform. The level crossing

and keeper's brick hut of 1961 are in the seen in the foreground, whilst the goods shed can just be seen emerging

through the trees. © David Glasspool 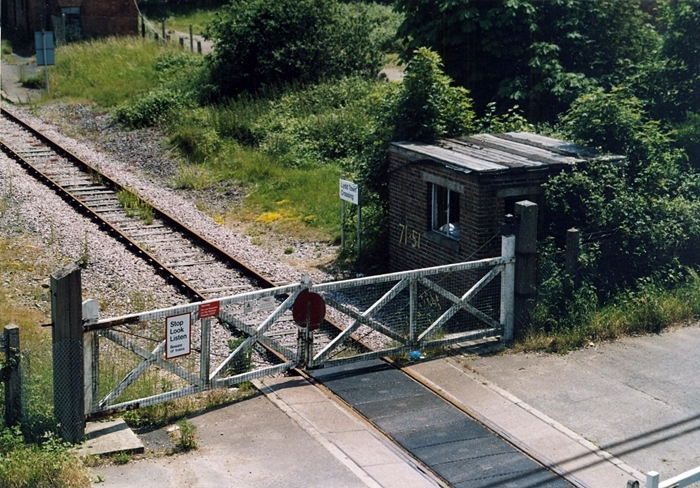 The crossing gates are still in regular use, with the weekly passage of a nuclear flask working from the power