This is one of three stations out of an initial number of six, which still survives upon the former course of the ‘’Elham Valley Railway’’ (EVR). The rather short-lived line was a 16⅛-mile-long double-track affair, running from Harbledown Junction, 1½-miles south of Canterbury (SER), to Cheriton Junction, 1⅛-miles west of Shorncliffe (Folkestone West). The EVR first appeared in the 1866 Parliamentary Session, outlining a nineteen-mile branch between Canterbury and Hythe, incorporating connections with both SER and LC&DR networks. An Act for this scheme successfully passed through Parliament on 6th August of that year, and the EVR Company was authorised to raise £300,000 of share capital, in addition to borrowing £100,000 in bank loans. Nothing became of the project, but the EVR was revived fifteen years later, this time in the form of the aforementioned Canterbury to Cheriton route. An Act of Parliament for the second scheme was successfully acquired on 28th July 1881, and the SER formally took over the project exactly three years later. Nevertheless, the EVR remained an independent concern until being vested into the SER on 25th June 1891.

Lyminge opened with the southern section of the EVR, between Cheriton Junction and Barham, on 4th July 1887; through running to Canterbury (SER) was not possible until 1st July 1889. Two platforms, about 330-feet in length, were in evidence from the outset, and unlike those at earlier-opened SER rural stations, these resided directly opposite each other, rather than being in staggered formation. The main building was positioned on the western platform surface: it was a typical economical SER structure, comprising a single-storey, dimensions of 75-feet in length by 20-feet in width, and was fabricated wholly of clapboard. The building was set upon a shallow brick base and comprised a slated pyramid-shaped roof, from which emerged a pair of chimneystacks. Attached to its southern elevation was a flat-roofed appendix, also of clapboard construction, which housed the gentlemen’s toilets. Extending from the main building’s eastern elevation was an attractive canopy 75-foot-long canopy, which comprised a semi-circular cross section, and came complete with the SER’s trademark clover-pattern valance (identical examples remain in existence at Paddock Wood). The canopy was supported upon five stanchions, and was roofed with corrugated metal. The eastern platform was equipped with a timber-built waiting shelter, comprising wrap-a-round sides, a backward-sloping roof, but lacked a canopy valance. Both platforms featured the familiar diamond-shaped gas lamps, and the western platform was lined at its rear with attractive timber fencing – the eastern platform lacked any form of backing, ultimately because a hill, covered with vegetation, rose up from behind. No footbridge was ever provided, but a track foot crossing did exist, linking the platforms at their northern ends.

Since conception, the line’s promoters had goods traffic as the primary source of income, rather than passenger receipts. Reportedly, much was to be gained from coal and iron ore, located deep in the Elham Valley. Goods facilities at Lyminge consisted of just two sidings, each terminating behind opposite sides of the western platform: that to the north was dedicated to coal traffic, whilst that to the south was served by a platform used for loading livestock (on market days, over 100 sheep were handled at the station). Despite being a latecomer to the scene, the line was signalled throughout by the SER, even though by this time the company had hired contractor Saxby & Farmer for numerous signalling projects. Saxby & Farmer was already well known for its work on LC&DR and LB&SCR lines, and indeed, re-signalled the SER’s Ashford to Minster (exclusive) line in the mid-1880s. Lyminge’s signal box was positioned north of the station, separated from the western platform by the single coal siding. Like the station building, it was a clapboard affair, comprising a slated pyramid-shaped roof and sash-style windows. An oddity was the fact that the Canterbury-bound ‘’home’’ semaphore signal was positioned a third of the way down the western platform surface – perhaps the coal siding’s loading gauge would have obscured it, had the signal post been placed at the platform’s end? All descriptions thus far are later illustrated in diagram form.

Passing through sparsely populated areas, the Elham Valley Line’s passenger traffic was never considerable, and early on it suffered competition from a parallel-running bus route. Goods traffic was, however, moderate, and the surrounding crop fields were a useful source of revenue for the railway. Even freight, however, could not save the line from rationalisation, and on 25th October 1931, single line working commenced north of Lyminge. All signal boxes along the route were decommissioned, except for that at Lyminge, where a passing loop and both sidings were retained. However, further economies made under Southern Railway auspices eventually saw the replacement of the SER cabin here: from 1st May 1937 onwards, the layout was controlled from a ground frame located upon the western platform surface, housed within a porch extension of the clapboard main building. To afford the signalman an unhindered view of the layout from this revised position, the platform canopy was demolished at the same time. The SR implemented similar signalling economies at Martin Mill and Eynsford stations, where signal boxes were replaced by platform-located frames to reduce staff numbers.

Severe service cuts along the Elham Valley Line came during World War II. From 1st December 1940, passenger services were curtailed so much that only that section of line in-between Cheriton Junction and Lyminge remained in use. From Lyminge, northwards, the line was in possession of the military, which used rail-mounted guns along the route and used the stations for storage. As invasion from the Continent became more likely, passenger services to Lyminge were wholly withdrawn on 3rd May 1943, and were not to restart until over 3½ years later. The army relinquished the line in February 1945, and passenger services recommenced on 7th October 1946, but only along the short section of route south of Lyminge (inclusive) – all stations north of here had seen their last passenger trains in 1940. However, even the restarted service was short-lived, lasting not even a year; total withdrawal of Elham Valley passenger trains occurred on 14th June 1947. Freight traffic upon the entire line lingered on for a number of months longer, and total closure of the route eventually occurred on 1st October 1947, just sixty years after the southern section between Cheriton Junction and Barham first opened. The whole route remained largely intact for the next fifteen years, but structural demolitions commenced on the turn of the 1960s. Thankfully, the main building at Lyminge, and its surrounding track bed, managed to escape obliteration, and for forty years since closure, the station site remained in a derelict state. Restoration of the vintage clapboard building commenced in 1987, as it embarked on a new life as a public library. Sadly, the track bed in the immediate environs was subject to residential development, cutting the station off to the north and south, but substantial remains of the western platform, and a complete bridge over the former track bed, are still to be seen. 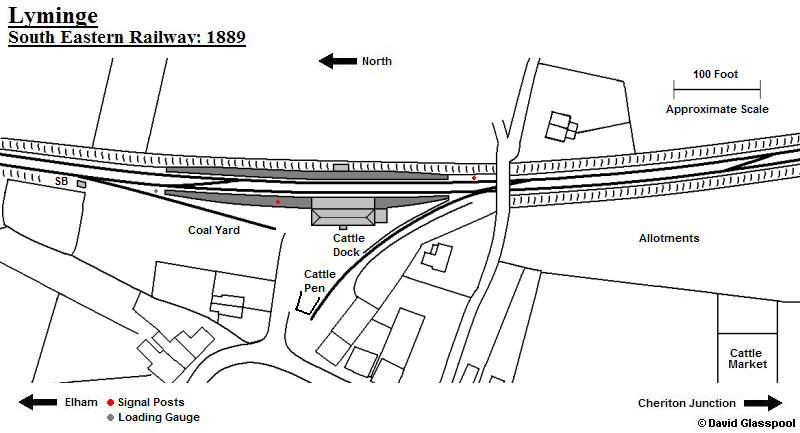 Lyminge at its peak, before SR rationalisation. Drawn by David Glasspool 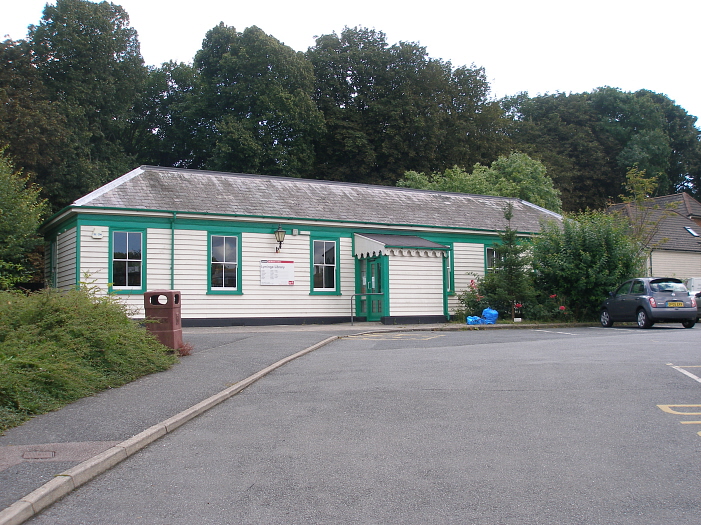 stacks have disappeared. The building always had a porch canopy, but the actual clapboard entrance underneath

is a new feature. Residential development upon the track bed immediately south of the station can be seen on the 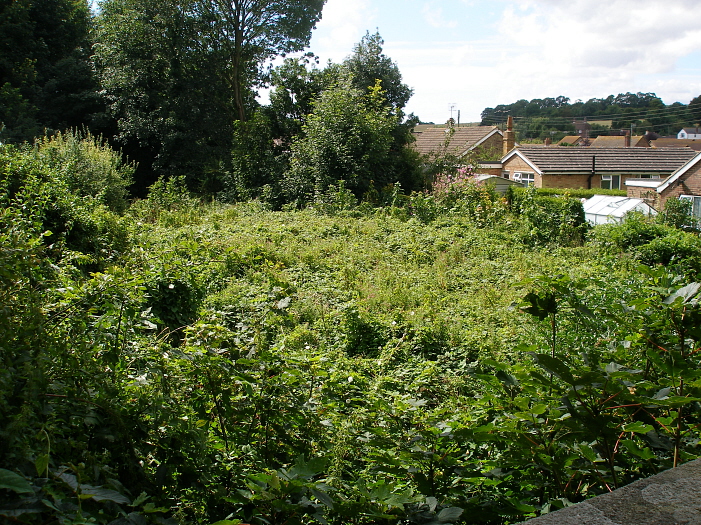 Immediately to the south of the house seen on the right of the previous picture, exists a bridge over the former

course of the railway. Beyond this bridge still exists the track bed, overgrown but undeveloped. David Glasspool 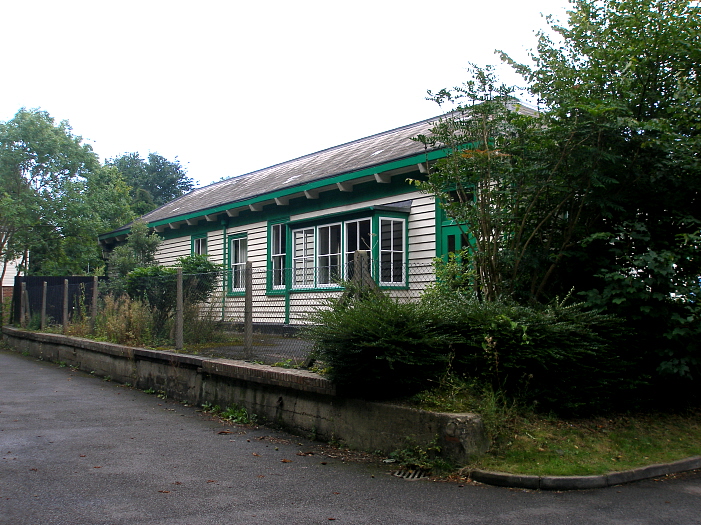 signal cabin. The addition of this necessitated the demolition of the platform canopy. The eastern platform

surface has completely disappeared, and the track bed area here is now host to a car park. David Glasspool