Nationalisation had been kind to the Bulleid Pacifics and, indeed, steam in general, because it delayed the electrification schemes proposed by the erstwhile SR. In fact, in its early years, BR’s attention turned towards developing a completely new range of relatively maintenance-free engines, the ‘’Standard Classes’’. The Kent Coast lines, which the SR had hoped to electrify by 1955, were not authorised for such works until February 1956. During the 1950s, however, a case had been made against running the Bulleid Pacifics in their original ‘’air-smoothed’’ formed and rebuilding the engines with a more conventional appearance, in line with the BR Standards then being produced. The innovative Bulleid features made his Pacifics expensive engines to operate and, at times, gave them poor availability, the latter contrary to what he intended. In 1954, Ronald G. Jarvis, the Chief Technical Assistant of the Locomotive Department, Brighton, was put in charge of a scheme to improve these engines. Jarvis was formerly a Derby man, and the prevailing BR culture was one of keeping costs low and running engines which were both relatively cheap and easy to maintain.

The decision was made to rebuild every Bulleid Pacific – 30 MN engines and 110 Light Pacifics. This was at a time when steam was intended to remain as BR motive power up until 1990, after which electric traction would take over. Cosmetic alterations to tenders had earlier begun in 1952: the high side flanges, which extended up to the same level as the cab roof, were cut down, to enable a water column pipe to be swung over the tender side freely. Then, in 1954, the boiler pressure of both MN engines and ‘’Lightweights’’ was de-rated from 280 PSI to 250 PSI. Up until this time, the Bulleid Pacifics and the ex-GWR ‘’County’’ engines shared the title of having the highest boiler pressure rating of any steam locomotive class in the country. Reducing the pressure allowed a more common grade of steel to be used in the firebox, which in turn made the engines cheaper to maintain. As earlier mentioned, the boilers of these engines were of welded construction, which was particularly important for the Light Pacifics, because it kept weight down. Steel tubes, called ‘’thermic siphons’’, were incorporated into the firebox: water was pumped through these, which provided a greater overall heating surface area. The raison d’être of this design feature was to conserve fuel, whilst at the same time raising steam production – as figures reveal, these engines were somewhat heavy on coal consumption.

The rebuild involved eliminating the chain-driven valve gear and oil bath, and incorporating the more common Walschaerts’ system. The steam reverser was removed in favour of a screw reverser, and the inside cylinder replaced by a completely new design. In brief, the steam reverser was linked to the valve gear and controlled the admission of steam to the cylinders through regulating the timing of the valves. Whether the locomotive moved backwards or forwards was determined by steam being sent into the cylinders above or below the pistons. Visually, the greatest alteration was the removal of the ‘’air-smoothed’’ casing and fitting of conventional boiler cladding. Again, emphasis was made on bringing these engines in line with the BR Standards then being brought into service. Removal of the casing provided improved access to boiler fittings, and room was now available for step-boards above the wheels. BR-style smoke deflectors were also fitted. No. 35018 ‘’British India Line’’ was the first engine selected for rebuilding, and was admitted to Eastleigh works on 16th November 1955. The work was completed over a three-month period, and No. 35018 was outshopped in its new form and put on display at Waterloo’s platform 15, on 14th February 1956. No. 35028 was the final of the MN Class to be rebuilt, entering Eastleigh Works in October 1959.

As of 1959, three MN engines were allocated to the South Eastern Division, all based at Stewarts Lane: the doyen of the class, No. 35001 ‘’Channel Packet’’; No. 35015 ‘’Rotterdam Lloyd’’; and No. 35028 ‘’Clan Line’’. In addition, ten were based at Nine Elms, seven at Bournemouth, seven at Exmouth Junction, and finally, three at Salisbury. The start of full-accelerated electric timetables on Kent Coast Lines (first the main ‘’Chatham’’ line on 15th June 1959, followed by the ex-SER trunk route via Tonbridge and Ashford on 18th June 1962), meant that steam became virtually extinct on the South Eastern Division. The remaining Bulleid Pacifics were transferred to the South Western Division, where steam traction had yet to be fully ousted. A large blow to the SR Pacific fleet came on 15th September 1962, when all Southern Region lines west of Salisbury were brought under the control of Paddington. Thus, all those engines based at Exmouth Junction, including the seven MNs, were absorbed into the Western Region fleet. Of those MN locomotives, just one, No. 35009 ‘’Shaw Savill’’, was withdrawn by the WR during the elimination of steam traction in the Exeter area, in September 1964. Happily, the other six members made their way back to the Southern Region, all but one (No. 35011 ‘’General Steam Navigation’’) remaining in service until summer 1967. 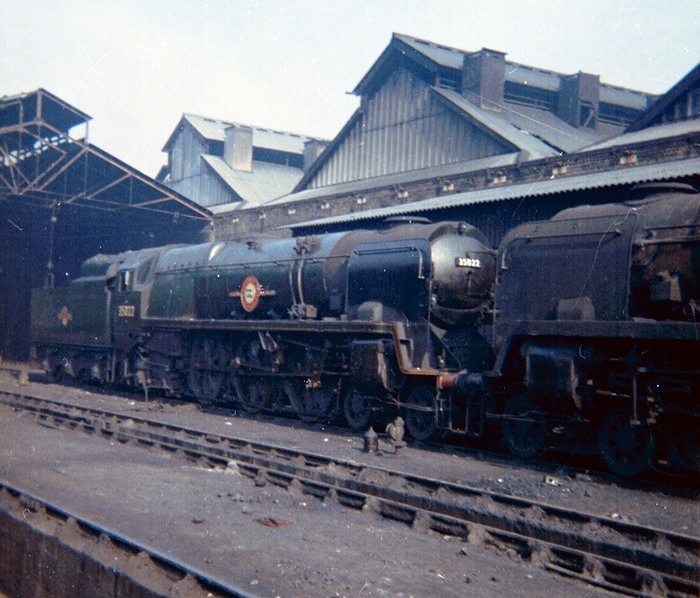 A view from 1964 shows No. 35022 parked outside Nine Elms ''old shed'', in a very clean external condition for the time. The engine's final shed allocation was in fact Weymouth, it being withdrawn from there in May 1966. It was sold to Woodham Brothers, Barry, and finally rescued from there for preservation. Since then, it has remained unrestored, and is apparently being used as a spares donor for No. 35027 ''Port Line''. No. 35022 was one of the earliest members of the class to be rebuilt, in June 1956. It was less than ten years old at that time, having been commissioned to traffic in October 1948. © David Glasspool Collection 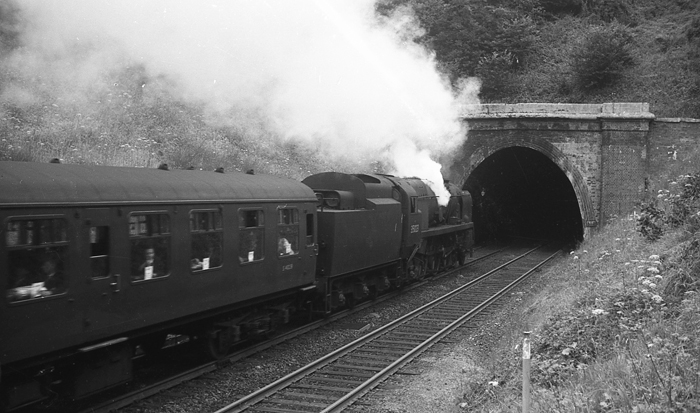 No. 35023 "Holland-Afrika Line" is seen about to plunge into the 742-yard-long Buckhorn Weston Tunnel, located 2¼-miles west of the station at Gillingham, with an Exeter-bound train on 13th August 1964. In the following month, steam traction on Waterloo to Exeter workings was replaced by "Warship" diesel hydraulic locomotives, the lines west of Salisbury having come under Western Region control in January 1963. © David Glasspool Collection 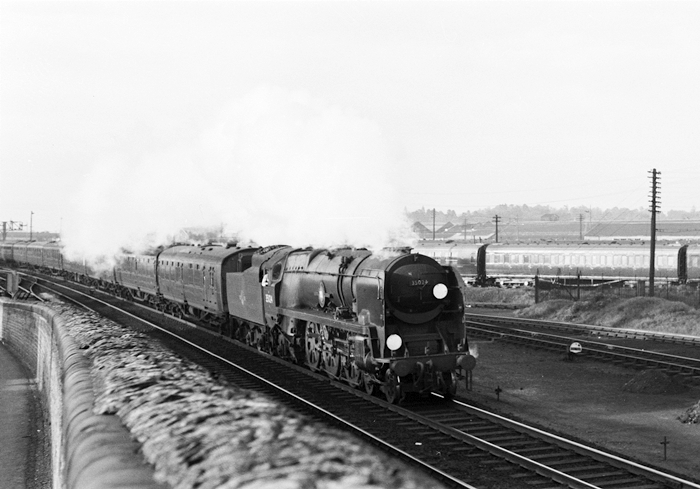 The familiar Bournemouth headcode is in evidence as No. 35024 charges through Eastleigh in 1964. In tow, a complete rake of Bulleid stock. The image has been captured from the well-known bridge at the southern end of the station, which led to the works. At the time, the sidings to the right were packed full of Bulleid and Maunsell locomotive-hauled carriage stock. Commissioned into traffic in November 1948, this engine took on its revised guise in April 1959. It was made one of the earlier Merchant Navy casualties, being withdrawn in January 1965; it was subsequently cut up in Newport, South Wales, the following May. © David Glasspool Collection 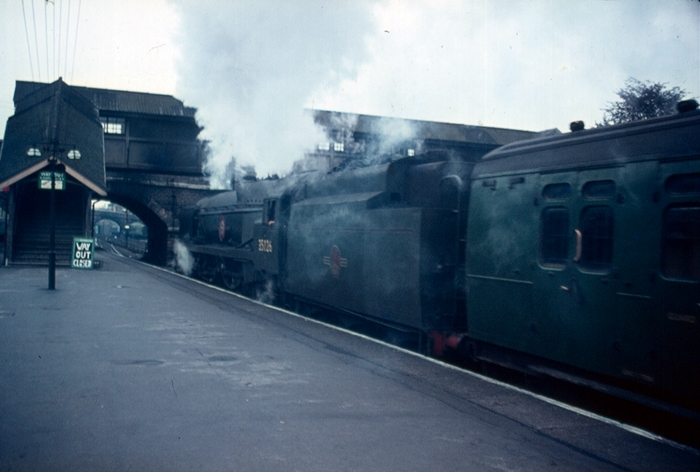 In September 1963, No. 35026 is seen departing Exeter Central with the famous ''Atlantic Coast Express''. The lines west of Salisbury had been part of the Western Region for exactly a year by this time, and after another twelve months, this service would be no more, the last running on 5th September 1964. No. 35026 remained operational until March 1967; by September of the same year, it had been scrapped in Newport, South Wales. It had originally entered service in December 1948, was named on 15th January of the following year, and took its rebuilt form in January 1957. © David Glasspool Collection