New Cross has a decidedly complex history, given its long association with the East London Line and, ever since its earliest years, its peculiar platform arrangements. Like its neighbour at St Johns, this was once an extensive station, with a platform face serving every running line on the approaches to the capital. Since the London Bridge area re-signalling and rebuilding of 1972 to 1978, New Cross has possessed a somewhat reduced presence, in light of the need to increase capacity on this busy route. The station came into use in 1850, being known as ‘’New Cross & Naval School’’ from the outset, the suffix deriving from a Royal Naval Boarding School for boys. This had opened five years previously in the district and catered for those pupils whose parents were officers in the Royal Navy. The fine school building still exists, and is today used by Goldsmiths College, now part of the University of London. The suffix was dropped from the name boards in 1854, and the station became ‘’New Cross (SER)’’, the bracketed term distinguishing it from the LB&SCR site, a mere ⅓-mile to the west. Railway expansion in the area was swift and the SER wasted little time opening new routes, particularly after the emergence of the rival East Kent Railway in 1858. By 1870, there were a multitude of lines converging into the single route passing through New Cross: the North Kent Line via Woolwich and Lewisham (opened 30th July 1849); the Dartford Loop Line via Sidcup (opened 1st September 1866); the Mid-Kent Line via Ladywell and Catford (opened 1st January 1857); and finally, the Tonbridge Cut-Off Line via Orpington and Sevenoaks (fully opened 1st May 1868). After the merging of Tonbridge Cut-Off and North Kent routes west of Lewisham (later the site of St Johns station), four parallel running lines were produced, these of which continued through New Cross. By the time Spa Road station was reached, the London Bridge approaches (Central and Eastern combined) comprised nine parallel running tracks.

The four tracks at New Cross were served by no less than six platform faces, arranged in the form of two islands and a pair of side platforms, the latter east and west of the layout. The fact that platforms outnumbered running lines saw the interesting scenario of the outermost tracks each being host to a pair of platform faces – thus, trains stabled on these lines could be accessed from both sides. A virtually identical arrangement could also once be found at Sevenoaks Tubs Hill, on the Tonbridge Cut-Off Line. Such set-ups, where a single-track is flanked on both sides by platforms, can still be appreciated today, notably at Yeovil Pen Mill in Somerset, and Horsted Keynes in West Sussex. The ‘’down’’ island extended for approximately 530-feet, its ‘’up’’ counterpart for about 475-feet, and both were host to platform canopies of 185-foot-length. Underneath the canopies on both islands could be found waiting accommodation and offices, about 70-feet in length. The ‘’down’’ side platform matched the length of the adjacent island, although comprised a canopy some 30-feet longer. The ‘’up’’ side platform was the shortest of them all, stretching for about 380-feet and comprising a 170-foot-long canopy. All platforms were linked together by a 145-foot-long enclosed glazed footbridge, this of which backed onto a smart station building straddling the tracks at the southern end of the layout, adjacent to New Cross Road. This was a single-storey affair, constructed throughout in yellow brick, tastefully frescoed at the edges with stone, and demonstrated the SER’s trademark sash-style windows. Sadly no more, the structure’s dimensions and general style can still be appreciated by observing the still extant main building at nearby New Cross Gate, despite the fact that these structures were built by different companies.

The signalling here was initially controlled by a cabin positioned just beyond the northern end of the ‘’up’’ island. Alterations were made on the advent of the East London Line (ELL) at the site in 1876, which saw a new larger SER-designed signal box come into use 200 yards north of the existing cabin, located upon the side of the embankment, west of the running lines. The ELL made connections with the SER route on both ‘’up’’ and ‘’down’’ sides of the layout, beyond the northern ends of the platforms. The 1876 engineering works at New Cross were substantial: an additional single line for ELL trains was laid on the ‘’down’’ side, parallel with the existing running lines, which involved obliterating a street of seventeen Victorian houses. The embankment immediately north of the platforms was widened to permit an increase in the number of parallel tracks from four to six. The ‘’down’’ side platform was lengthened at its London end by 170-feet, to accommodate a bay at its rear for use by ELL services, and the canopy was extended by a substantial 250-feet in the same direction, the latter being built to the SER’s attractive clover-patterned valance design. Alongside the bay line existed a turntable and run-a-round loop, for exclusive use by ELL engines, in addition to a locomotive siding – the latter was flanked to its east by a water tower and coal staith. New offices were erected behind both ‘’up’’ and ‘’down’’ side platforms, in the SER’s customary yellow brickwork, and the station became host to no less than seven platform faces. A Liverpool Street to Addiscombe service started calling at New Cross from 1st April 1880.

Electrification of the ELL was swift, and a full electric service commenced on 30th March 1913, which saw further structural works at New Cross. Both turntable and run-a-round loop were abolished, and removal of the former permitted the bay platform and canopy to be widened at their southern ends. It was at this time that the ELL platform face was segregated from the SER surface by metal railings. ‘’Up’’ and ‘’down’’ island platforms were also extended northwards. Electrification saw the cessation of through working between the networks of the GER (Great Eastern Railway), LB&SCR, and SER. It is worth noting that the ‘’up’’ side connecting spur between ELL and SE&CR metals was not electrified. 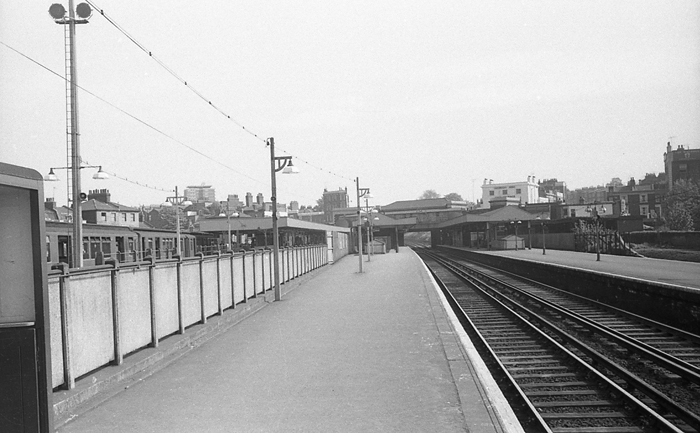 A southward view in 1967 shows the state of affairs prior to ''Operation London Bridge'', which involved abolishing the island platforms in view to drive additional lines through the station. London Transport ''Q'' stock is seen in the East London Line bay platform on the left. © David Glasspool Collection 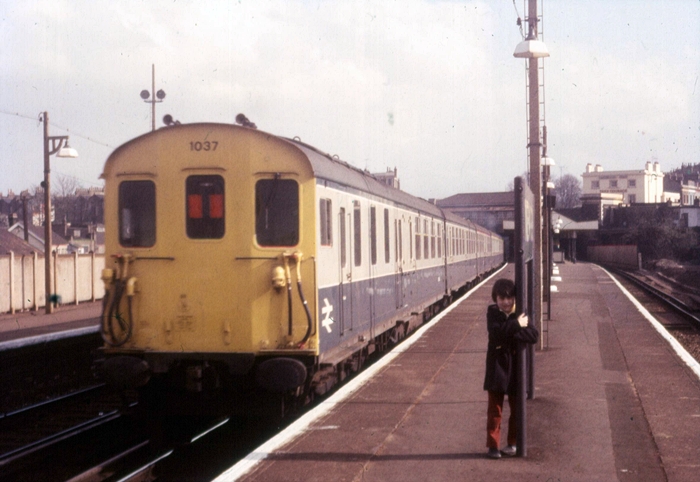 A classic 1972 photograph depicts a scene wholly unrecognisable from today, as ''Hastings'' DEMU No. 1037 is seen passing through non-stop, heading towards the Tonbridge Cut-Off Line. On the far right of this Hither Green-bound view, we see the site once occupied by the western-most side platform. The photograph is taken from the ''up'' island: all platforms in view were demolished during the London Bridge re-signalling works. In the background can be seen the SER's ''high-level'' station building, whilst in abundance are the concrete bracket lampposts of BR(S). The concrete fencing on the far left indicates the disused platform face of the ''down'' island, of which a single track laid behind. © David Glasspool Collection