For long, this area has been associated with the narrow gauge Romney Hythe & Dymchurch Railway, originally opened on 16th July 1927 and running on a track gauge of 15-inches. The layout is extensive at New Romney, which boasts a four-platform station covered by a 240-foot-long trainshed, in addition to locomotive and carriage depots. However, probably unbeknown to the railway’s many visitors each year is that a station serving a standard gauge branch line once existed no further than 80-yards south of the narrow gauge site. Today, there is no trace of this station, the site having disappeared under a series of dreary industrial units; it preceded its narrow gauge counterpart by over forty years.

The origins of New Romney and Littlestone-on-Sea, as the station was once known, rest with the ‘’Lydd Railway’’, incorporated by an Act of 8th April 1881. This authorised the construction of a single-track line, 10-miles in length, from Appledore to Dungeness over Romney Marsh. Appledore had come into use as early as 13th February 1851, on the SER’s first line to Hastings, which took a circuitous route from the capital via Ashford. It was very soon relegated to secondary status when through running to Hastings via Tunbridge Wells became possible a year later, on 1st February 1852. Construction of the line was given a window of five years and the ‘’Lydd Railway’’ agreed a working arrangement with the South Eastern Railway for operating the trains. The SER’s Chief Engineer, Francis Brady, was selected as engineer of the Lydd Railway. He had held this position with the SER since 1st March 1870, after being promoted from the role of Assistant Engineer on the death of his predecessor, Peter Ashcroft.

Progress was swift; the marshes by their nature were dead flat, requiring no major earthworks. The line between Appledore and Lydd, a length of 7-miles and 6-chains, opened to all traffic on 7th December 1881. Beyond to Dungeness, the line came into use for freight traffic only on the same day – indeed, the extensive shingle plains of Britain’s only desert became a useful source of ballast for the SER. Sights were set on rapid expansion and on 24th July 1882, authorisation was granted for two new sections of line:

At the time, Dungeness was seen as having the potential to be developed into a deep water port, where additional ferry connections with the continent could be made. This inspired the Headcorn extension, which provided a shorter route to the capital by cutting off the lengthy detour via Ashford. New Romney was a market town and one of the Cinque Ports, 2½-miles northeast of Lydd. As of 1861, it covered an area of 2,919 acres and had a population of 1,062 (the latter of which was recorded at 850 in 1827 and had subsequently increased to 1,328 by 1908).

To set the ball rolling, passenger services were extended from Lydd to Dungeness on 1st April 1883. Next came the opening of the single-track-branch to New Romney, on 19th June of the following year. This diverged from the Dungeness line about 0.85-miles southeast of Lydd. At the junction, a curve of about 60-chains was formed to give the branch a northerly heading towards New Romney. The terminus there was the branch’s only station from the outset, being named ‘’New Romney & Littlestone’’.

The terminus received an additional suffix early on in life, becoming ‘’New Romney & Littlestone on Sea’’ in October 1888. The name ‘’Littlestone’’ derived from a former rocky headland nearby called ‘’Little Stone’’, and the ‘’on-Sea’’ suffix came about as efforts to develop the locality into a neighbouring seaside resort of New Romney began in the 1880s. Littlestone on Sea boasted a sandy beach and its popularity started to grow towards the turn of the century.

The terminus itself was very much styled on the earlier-opened site at Lydd. Two platforms flanked either side of a run-a-round loop formation, the tracks of which virtually ran north-to-south at this point. The western platform was host to the main building, which was an attractive red-brick structure, a variation of the design which had previously been seen down the line at Lydd and Brookland stations. Single-storey and with a slated pitched roof, the station building comprised arched windows and doorways. A gentlemen’s toilet block extended from the building’s southern elevation, whilst from the eastern wall was attached a neat canopy. The latter had a downward-sloping roof, a spiked timber valance, and was supported by six stanchions. The opposing platform was provided with a more modest structure in the form of a timber waiting shelter, but even this was equipped with a spiked timber valance affixed to a backward-sloping roof. Gas lamps were installed on both platforms.

On the western side of the lines could be found the goods yard. Here, four sidings fanned out from a single connection with the incoming line from Lydd. Early maps show one of these sidings to terminate at a turntable pit, whilst a second served a dock platform and a third passed through a goods shed. An important traffic here was livestock, sheep being moved in large quantities from the marshes inland to prepare for the winter season. These details are better illustrated in the below diagram, which also includes the former position of the signal box, located north of the divergence of the goods line from the station approach.

The independent Lydd Railway was absorbed into the SER in 1895. By 1907, the run-a-round loop at the New Romney terminus had been extended southwards by about 70-yards and the platforms also lengthened in the same direction. Minor changes were also evident in the goods yard layout. On the advent of the Southern Railway in 1923, more alterations followed, including the installation of this company’s trademark barley-twist lampposts on the western platform. The eastern platform fell out of use, the lampposts and waiting shelter being permanently removed, and grass was allowed to take over the surface. A sturdy brick-built water tower was erected in the fork of the diverging goods and station lines.

As mentioned earlier, the 15-inch gauge Romney Hythe & Dymchurch Railway came into existence in 1927. It initially ran between Hythe and New Romney, an extension of the line being made to Dungeness via Greatstone in 1928, and was double-track throughout. The RH&DR’s New Romney station resided a stone’s throw from the SR’s site, just to the north west on the opposite side of the road (see diagram for details). The standard gauge line from the SR station was extended northwards across the road, to run parallel with the RH&DR platforms, forming a private siding. This was used for RH&DR coal deliveries, brought in by rail via the branch from Appledore.

Development of holiday homes along the coast between Dungeness and New Romney during the 1930s encouraged the SR to re-align the branch line. Only the first ½-mile of the original route from the terminus was retained, a new course for the line being made nearer the coast. The junction with the Appledore to Dungeness line was moved 1⅓-miles south east, inducing a sharp curve for trains to negotiate when embarking on the branch. Two intermediate stations were opened: Lydd-on-Sea and Greatstone-on-Sea. The former was situated ½-mile from the junction, comprising an island platform situated within a passing loop formation; the latter had a single platform located 1½-miles from the terminus. The new single-track alignment opened on 4th July 1937; the original branch was abandoned and the remaining 1½-miles onto Dungeness became goods-only. It was probably at this time that the signal box at New Romney closed and the signalman was subsequently re-housed in a porch on the platform, which extended out from the main building. Similar economies were enacted by the SR in the 1930s at Martin Mill and Eynsford stations, where signal boxes were abolished and replaced by lever frames installed within the booking offices.

The branch survived both World Wars unscathed, no cutbacks being enacted during a time when other branches and stations were being culled, if only temporarily. No doubt the fact that the area was very much military country, in a strategic location, helped its survival. An army training camp had been established at Lydd in the late 19th Century, which brought a large amount of military traffic on the line from Appledore, and indeed this remains in existence today in the form of a rifle range. The nearby RH&DR, which was taken over by the military in World War II, again due to its strategic location, did suffer punishment, particularly to the track. This was particularly true of that section between New Romney and Dungeness, which had been run over by the army’s own tanks and bulldozers. The double-track line re-opened between Hythe and New Romney on 2nd March 1946, but the Dungeness section was not re-commissioned until 21st March of the following year, and only as a single-track.

Goods services on the Dungeness spur ceased in early 1952, but trains to New Romney remained – coal deliveries for the RH&DR continued and the station enjoyed through passenger trains from Charing Cross on summer Saturdays. This period of relative buoyancy started to disappear on the advent of the 1960s, through a combination of increased car ownership, Phase 2 of the Kent Coast Electrification, and of course the Beeching Report of 1963. The Hastings to Ashford and New Romney lines were omitted from plans for third rail. Instead, DEMUs in the form of Hampshire/Berkshire stock gradually started taking over from steam traction on these routes from 1958. The death knell sounded with the publication of the Beeching Report on 27th March 1963, within which the Hastings to Ashford line was recommended as one of many line closures. As touched upon earlier, this line had become somewhat of a backwater as early as 1852, when a more direct route between Tonbridge and Hastings via Tunbridge Wells came into use.

The end of steam traction on the South Eastern Division in 1962 saw the water tank upon the tower at New Romney and Littlestone-on-Sea station removed. Goods facilities at the terminus were formally withdrawn on 18th April 1964; coal deliveries to the RH&DR also stopped coming by the Appledore route in this year. The final blow was the complete closure of the New Romney branch on 6th March 1967, including the withdrawal of passenger trains from all intermediate stations to Appledore. The track was lifted in 1969 and the station building demolished in the subsequent decade. The space vacated by the standard gauge siding, which was once used for coal deliveries to the RH&DR, was absorbed into the miniature operation in the 1970s. In the latter part of this decade, this railway’s New Romney station was reconstructed on the siding’s former site, being built with a substantially larger trainshed than previously.

What of the fate of the Ashford to Hastings line? Closure was scheduled for 1969, but this date then passed, reports being amended to reflect 1971 as the year of service withdrawal. Thereafter, the route continued in a state of limbo, with the cloud of closure hanging over it. The Appledore to Dungeness line, whilst no longer catering for passengers, carried a new type of freight traffic for the nuclear power station (operational from 1965), in addition to aggregate trains. Eventually, economies were enacted to a much lesser extent by singling of the route between Appledore and Ore in 1979, but today the Hastings to Ashford line, plus most of the Appledore to Dungeness branch, remain intact.

Click the above for a larger version. Drawn by David Glasspool 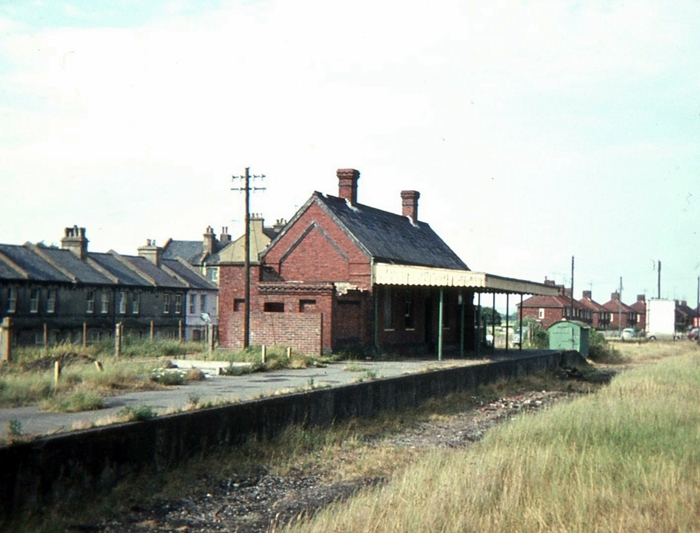 This northward view of the station, taken from the grassed-over eastern platform, was taken shortly after track lifting had finished. The toilets were once housed in the single-storey appendix of the main building, nearest the camera and bricked up. The vacant space to the left of the station structure was once host to a timber parcels shed. The signalman's ''porch'' can just be seen underneath the far end of the canopy. Today, not a brick remains. © Roger Goodrum