By 1960, the Associated Portland Cement Manufacturers (APCM) had a multitude of cement making plants lining the south bank of the Thames, stretching from Dartford in the west, to Gravesend in the east. However, plans emerged in 1967 for the construction of a large, modern cement works on the bank of the Thames at Northfleet, on the site of the existing Bevan’s Works, which would ultimately replace these older establishments. The site had been used in the cement producing capacity since 1853. By the mid-1960s, APCM preference was that of centralising operations in a strive for efficiency, and replacing individual sites with one large facility had the potential to boost output and reduce costs. Construction of the then new Northfleet Works commenced in 1968. By this time, in addition to United Kingdom trade, APCM had significant exports, and to supply all interests, the cement plant was to be equipped with six kilns capable of a combined output of four million tonnes of cement a year. Approximately 20% of this was destined for overseas markets: Africa and North America in particular. To feed the works, excavation commenced in Greenhithe to produce a huge chalk pit on former farmland, alongside an existing quarry operation. This subsequently became known as ‘’Western Quarry’’: its existing easterly neighbour, which had been in use since the turn of the 20th Century, was also included within the plans. In 1969, the go-ahead was given to deepen this pit (by then known as ‘’Eastern Quarry’’) by a further 6.7 metres. This followed in the footsteps of a previous deepening exercise in 1952, which saw the pit floor lowered by 2.4 metres, and would allow new chalk supplies to be reached in anticipation of Northfleet Works’ opening. Despite closures looming for the existing APCM North West Kent sites, a chalk operation at Swanscombe was to remain in use.

In 1969, commissioning of Northfleet Works began piecemeal, and in this year, the first of six kilns became operational, being some six metres in diameter. In the meantime, measures were being put in place for a direct connection between the facility and the North Kent Line. To the south of the site, on the opposite side of the main road, resided an exhausted chalk pit of the former Bevan operation. The plan was to feed a rail connection through to the works via this excavation: the main road would be tunnelled under in two places, and a double-track loop line laid. This would curve around the perimeter of the cement works, and the fact that the track layout was a continuous loop meant that trains could exit without the need for a reversing manoeuvre. The exhausted chalk pit had also become home to a large electronic substation. In addition to this connection, the land immediately south of Northfleet station had been earmarked for a number of cement-dedicated sidings, which would have two connections with the North Kent Line to the west of the platforms. The sidings were to be controlled by an independent onsite control office, and two of the tracks would be hosts to travelling cranes. The link between the sidings (south of the North Kent Line) and the loop line (north of the commuter route) was achieved by cutting through the British Rail embankment and replacing the earth with a flat-span bridge.

By December 1970, Northfleet Works was fully operational, and on 14th of that month, the cement sidings to the south of the station were brought into use. Rail-delivered chalk came to the site from Mountfield (East Sussex) and Theale (Berkshire), whilst the former and Welbeck Colliery (Nottinghamshire) also supplied the works with coal. Furthermore, a truncated section of the branch line which formerly ran to Gravesend West was still in existence, running to a coal bunker at the former site of Southfleet station. This remnant of the Gravesend West route was finally decommissioned in 1976.

Track plans of Northfleet Cement Sidings in 1990. Clicking on either of the above will open up the original continuous full size version of the plans. Drawn by David Glasspool 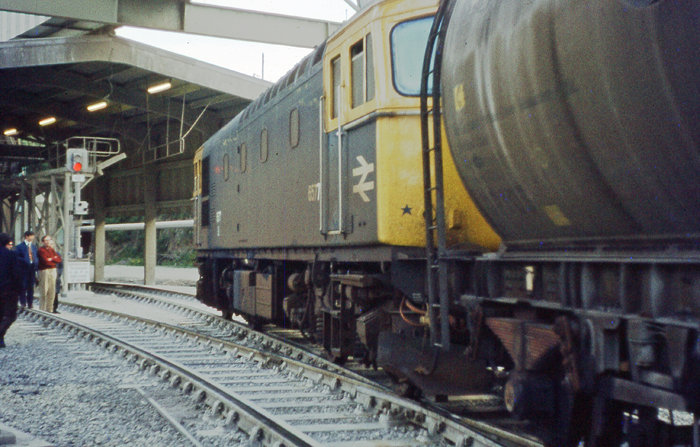 "Crompton" No. D6577 is seen two-thirds of the way around the merry-go-round loop, awaiting the signal to clear before proceeding under the cement loading silos. Speed was limited to 5 MPH. © David Glasspool Collection 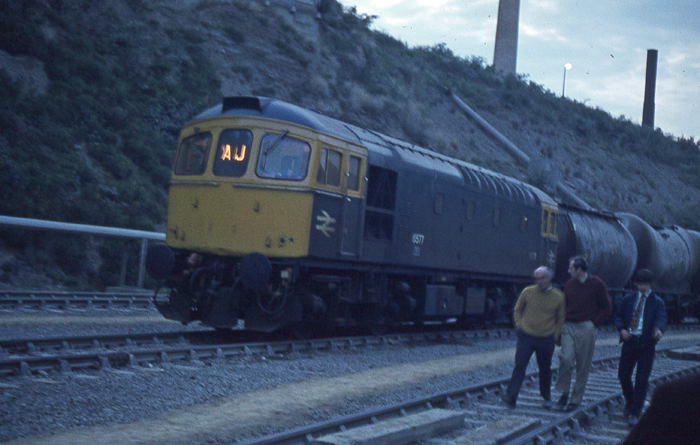 "Crompton" No. D6577 once again, now at dusk. The train has completed the loop around the cement works complex and is now on the western side of the site, facing in the direction of the tunnel portal leading back to British Rail metals. © David Glasspool Collection 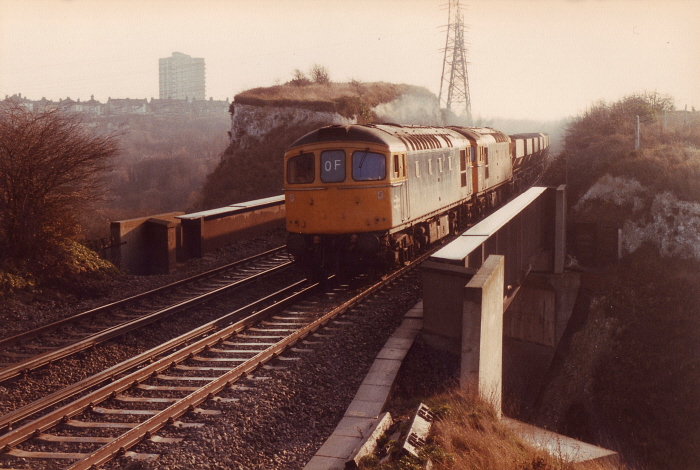 A pair of BR Blue Class 33 diesels are seen cruising over the bridge which, at that time, carried the North Kent Line over the tracks which led to Northfleet Cement Works. Heading in the westward direction, the two are hauling the Allington to Westbury empties. The bridge is indicated at the eastern extremity of the previous diagram. © Chris 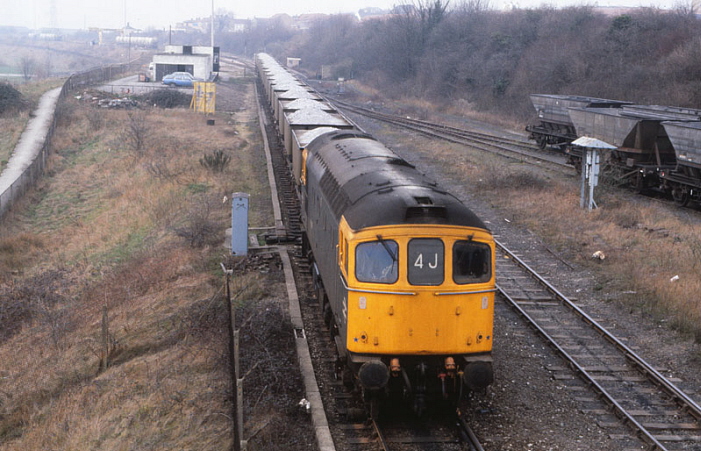 This westward view of Northfleet Cement Sidings in late 1983 shows a Class 33/2 ready to proceed to the cement works with the Mountfield to Northfleet gypsum train. The formation will embark on the tight curve under the North Kent Line, which leads to the loop line of the cement works. On the right can be seen merry-go-round (MGR) hopper wagons, and a line of cement wagons in the background mark the position of those sidings alongside Northfleet station. The structure on the left is the sidings control room. Note the beginning of the guide rail in the immediate foreground. © Chris