I was in two minds deciding whether or not to include this motive power depot in the main index. It is undeniably a Central Division shed, but that stretch of the Brighton Main Line between London Bridge and Redhill has always been a grey area for the website, given that it once formed part of the South Eastern Railway's trunk route to Dover until 1868. Indeed, the shed which this section concerns, that at Norwood Junction, was of a much later time.

Formed in 1923, the Southern Railway (SR) swiftly began modernising the networks of the constituent companies which preceded it. Serious inroads were made on the electrification front, particularly ex-SE&CR suburban lines which had for long been starved of investment by a destitute Managing Committee. More significant was the electrification of the Brighton Main Line in 1933, scheduled electric services commencing on 1st January of that year. However, that was not the end of steam on the route: the colossal engine shed at Brighton itself was retained, a new motive power depot was planned for Norwood Junction, and modernisation was to be enacted on the existing site at Redhill.

Authorised in 1933 and commissioned two years later, the shed at Norwood Junction was opened ½-mile north of the station of the same name, at mile post 8¼ from London Bridge. The depot was positioned on land bordered by the Brighton Main Line to its west and, to its east, by a single track linking the trunk route with the Beckenham Junction to Crystal Palace (Low Level) line. The shed formed part of a scheme to allow the eventual closure of the huge ex-London Brighton & South Coast Railway (LB&SCR) depot at New Cross Gate, which dated back to 1839 and had a locomotive allocation consisting mainly of tank engines for freight work. Norwood Junction alone would not have been able to absorb New Cross Gate's entire fleet, so rebuilding at Bricklayers Arms also took place to accommodate displaced engines from there and West Croydon.

The depot at Norwood Junction comprised a dead-end shed building which covered five tracks entering from the south. The main structure was of concrete construction around a steel frame, clad with corrugated asbestos, and demonstrated a sawtooth north light pattern roof. With reference to the latter, the theory was to have the roof's glazing facing in a northward direction, to enable the best conditions for light distribution within the building, avoiding shadows and preventing heat build up through direct sunlight. Presumably, this was an advantage which only lasted a short time, given how filthy engine sheds quickly became. The building's general design was as per that shed structure which had come into use at Hither Green two years previously. The latter was, like Norwood Junction, principally a depot for freight locomotives.

A 65-foot turntable was provided at Norwood Junction, as per Hither Green, this of which was located beyond the shed building, at the northern extremity of the site. The tracks leading to the turntable separated the shed building from an elevated coal stage. Note should also be made of the water tower here, a substantial structure attached to the western side of the shed which, including the tank it supported, raised to four storeys in height. It comprised a steel frame encased in concrete but, unlike that at Hither Green, the sides were mainly infilled with red brick.

New Cross Gate shed did not formally close until June 1947, by which time it had been inflicted by heavy bomb damage as a result of the war years. The remaining allocation was split between Bricklayers Arms and Norwood Junction, but it remained as a stabling point for engines until 1951. The buildings lingered on until 1957, when they were demolished and electrified sidings subsequently laid on the site.

Under British Railways' alpha-numeric shed code system, Norwood Junction became 75C in February 1950. Previously, the SR had not adopted a formal coding for its depots, but abbreviations were typically used; in this case, "NOR" for Norwood Junction. From the mid-1950s, diesel shunters (later to become Class 08) started to arrived in numbers at both Norwood Junction and Hither Green Depots, followed in 1960 by an influx of Type 3 (later Class 33) diesels. Then on, the depots were in terminal decline. A brief reprieve for steam occurred for the pair when they received a handful of engines displaced by the closure of Bricklayers Arms and Stewart's Lane sheds in June 1962 and September 1963 respectively. Norwood Junction shed formally closed to steam traction on 6th January 1964, thereafter being used to stable diesel locomotives. The shed closed completely in 1966 and the buildings demolished that year, the site subsequently being used as a store for the engineers' department.

Click the above image for a larger version. © David Glasspool 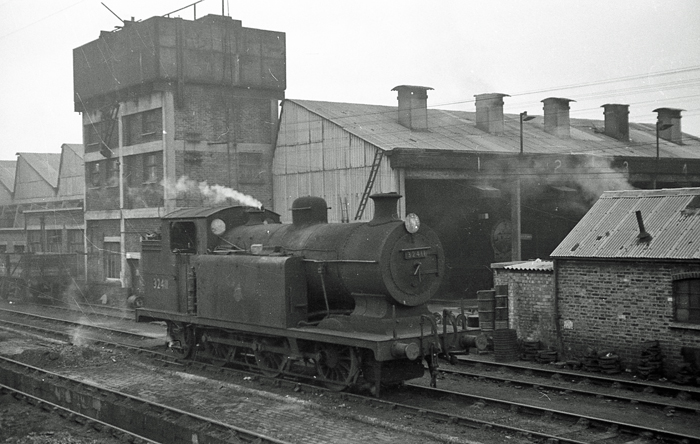 The sawtooth roof of the engine shed and the huge water tower are evident in this view, which shows "E6x" Class No. 32411 upon the middle of the three tracks which led to the turntable. Like Hither Green, Norwood Junction was principally a freight depot, which was reflected in the shed's locomotive allocation. No. 32411 had started life as a plain "E6" Class, one of twelve locomotives commissioned by the LB&SCR for hauling local goods trains. The engine became an "E6x" Class in 1911, after being equipped with a boiler and smokebox of greater length. Note, to the left, the inspection pit between the rails and, to the right, the numbers above each shed road. "Q" Class 0-6-0 No. 30547 can just be seen within the darkness of the shed, on road No. 2. © David Glasspool Collection 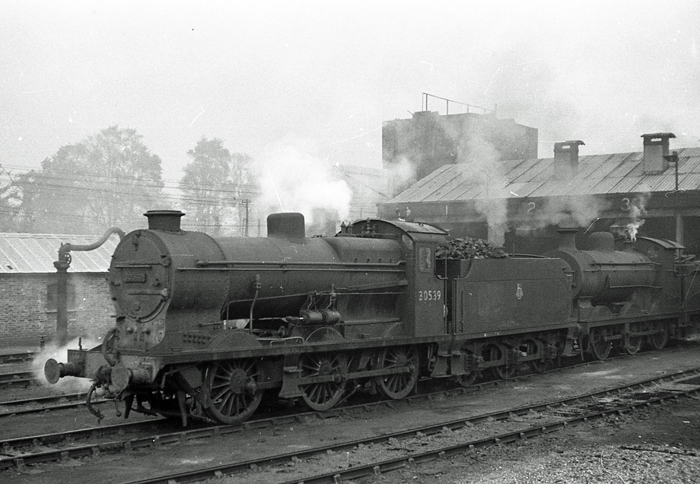 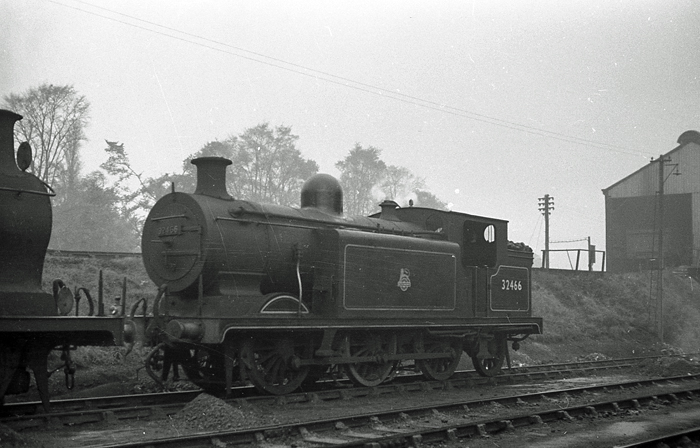 In rather good external condition, wearing BR Lined Black with early "Cycling Lion" crest, is "E4x" Class 0-6-2 No. 32466. The locomotive was one of four rebuilt from plain "E4" Class between 1909 and 1911, which involved engines being equipped with a higher pressure boiler. Behind the locomotive can be seen the elevated coal stage. © David Glasspool Collection