Two stations have carried the ‘’Nunhead’’ title on their name boards, their sites being situated within 70-yards of each other. The first opened on 1st September 1871 at the divergence of two dead-end branch lines, the latter of which became rather non-consequential stubs of the SE&CR’s network. The first line in the area was that to Crystal Palace, a 6½-mile-long branch which came into use for regular passenger services on 1st August 1865. Double-track from the outset, it had been constructed by the independent ‘’Crystal Palace & South London Junction Railway’’ (CP&SLJR) and was subsequently leased to the LC&DR. The second branch line was that to Greenwich Park, originally sanctioned on 28th July 1863 to spur off the then proposed Crystal Palace route. This, too, was a double-track line, but it suffered a rather protracted construction phase for what ultimately became a short 2¼-mile-long route. The line was opened to Blackheath Hill on 18th September 1871, 1¾-miles from the junction with the Crystal Palace branch. It was not until 1st October 1888 that the final ½-mile to Greenwich Park was opened to passenger traffic. Mention should also be made of a third, albeit later, route which left the original Crystal Palace branch at Nunhead. This is colloquially known as the ‘’Catford Loop’’, and was originally sanctioned on 10th August 1889 under the nominally independent ‘’Shortlands & Nunhead Railway’’. The line was double-track, 4-miles 69-chains in length, and came into use on 1st July 1892 as an alternative route to the existing trunk line via Penge.

As the enclosed map illustrates, the first Nunhead station comprised two island platforms separated by just a single-track. Both extended for 400-feet, were of irregular shape, and were linked at their western ends by a subway cut through the embankment. There was no main building in evidence, and all offices and waiting accommodation upon the platforms were of timber construction. The canopies were evidently extended over time in piecemeal fashion, for those on either island had sections of varying heights. The complicated three-way junction to the east was controlled by a decidedly tall signal box, positioned just beyond the ‘’country’’ end of the ‘’up’’ island. The need to see over the top of the canopies justified its height, and it eventually controlled a complicated layout. Running parallel with the site along the northern side of the departing Greenwich Park line could be found a spacious goods yard, occupied by four sidings. The main inward traffic was coal for the surrounding houses, and further goods sidings flanked either side of the Greenwich branch.

Both Crystal Palace and Greenwich Park branches have chequered histories. Three years after opening, the junction status of Nunhead hung in the balance: the CP&SLJR and LC&DR companies were at loggerheads. The LC&DR threatened to abandon the Crystal Palace line, starving the owning company of rent payments. This stance became credible in 1874, when the LC&DR secured powers to build a single-track spur in the vicinity of Kent House, linking the main line through Herne Hill with the LB&SCR’s Beckenham to Victoria line via Crystal Palace. The embankment was quickly built, but soon enough both parties came to an agreement, which led to the smaller concern being absorbed by the LC&DR in July 1875. Closure of the line did, however, occur little over forty years later, if only temporarily. Cutbacks forced upon the SE&CR during World War I saw Crystal Palace services withdrawn from 1st January 1917. Indeed, closure of the Greenwich Park branch followed on 1st September of the same year for similar reasons. The latter never recovered from this decision, and was destined not to re-open. The formation of the SE&CR Joint Managing Committee in 1899 had dampened down the once frenetic competition between LC&DR and SER rivals, and the decision was taken to adopt the SER’s Greenwich line instead. Freight trains continued to use the ex-LC&DR branch as far as Brockley Lane, where the Great Northern Railway had established a coal depot. The terminus at Greenwich Park was used to berth empty stock. Indeed, throughout this episode, the Catford Loop Line remained in use.

On 1st March 1919, the Crystal Palace branch re-opened to traffic, and Grouping was just over the horizon. The Southern Railway formally came into existence in 1923, and the company quickly set about electrifying ex-SE&CR suburban lines. The first candidates were the ex-LC&DR lines from Victoria and Holborn Viaduct. Lines through Herne Hill and Catford were to be electrified on the 660-Volt third rail D.C. system up to Bickley Junction. From the latter, third rail was to be taken down on the Bickley Loops to Orpington, on the ex-SER main line. In addition, the Crystal Palace branch from Nunhead was to be similarly treated. As part of these works, it was decided to build a completely new station at Nunhead, to the west of the existing site, on the opposite side of the road. A single island platform was built upon an embankment which, until now, had accommodated four parallel tracks: the ‘’up’’ and ‘’down’’ lines west of the original station were separated by a run-a-round loop. The then new island extended for 520-feet and comprised a surface made up of timber planking. A W-shaped canopy (latterly a trademark SR design), 270-feet in length and with plain timber valance, was erected. At street level, on the ‘’up’’ side of the embankment, beside the railway bridge, a neat red brick booking hall was built. This comprised a hipped slated roof and was linked to the island platform by a subway. The new station came into use on 2nd May 1925, and public electric services commenced on 12th July of the same year. Platform lighting was electric from the outset, supported upon SR Swan Neck lamps with hexagonal shades. Platform run-in boards featured prefabricated concrete surrounds.

no less than three diverging routes to the east: Greenwich Park and Crystal Palaces branches, and the Catford

Loop. The Crystal Palace branch is formed by the most southerly pair of tracks at the bottom right-hand corner

of the map; alongside are those of the Catford Loop. Note that to the west of the station, the layout was briefly

four-track. It was here that the SR opened the replacement island platform in 1925. Click the above for a larger 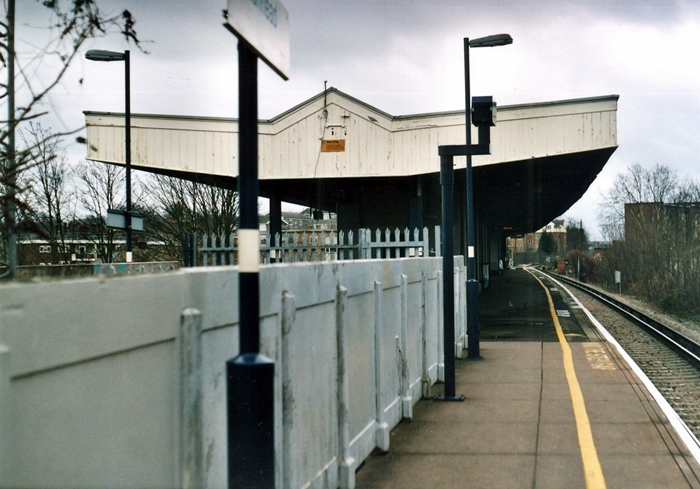 This is a tricky location for photography, but the above eastward view at least shows the SR style W-shaped

canopy to good effect. The four-storey-high flats in the background, with the white-coloured top floor, occupy

the former site of the goods yard. David Glasspool 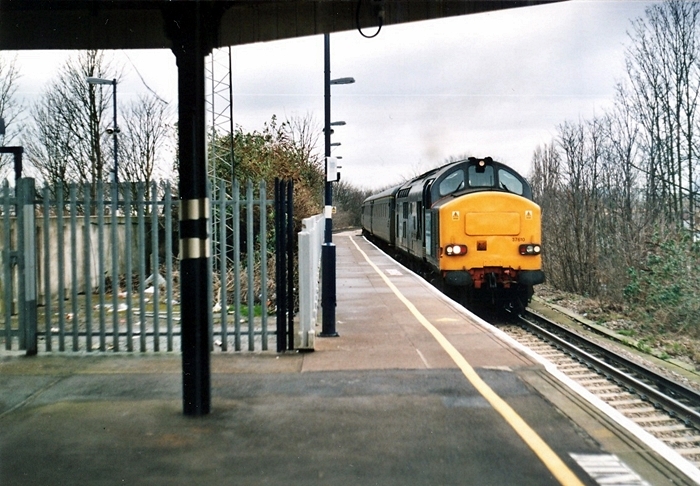 Trundling through towards Hither Green was Class 37 No. 37610, top and tailing the SERCO Test Train with