After its formation in 1899, the SE&CR Joint Managing Committee embarked on a general modernisation programme of its suburban network. The most major of these works began at the turn of the 20th Century, and involved the quadrupling of the ex-SER’s Tonbridge cut-off line in-between St Johns and Orpington inclusive. This involved four comprehensive station rebuilds – Hither Green, Grove Park, Chislehurst, and Orpington – and the opening of an additional site at Elmstead Woods. As part of the strive to improve suburban railway operation, the SE&CR began constructing at Ashford, in November 1904, a fleet of 0-4-4 tank engines (which became the ‘’H’’ Class) to work the growing commuter traffic.

Orpington was transformed into a sizeable six-platform affair, and was of strategic importance, for it laid at the end of the four-track section of route, marking the boundary of the London commuting zone. To provide locomotive facilities at the ‘’country’’ end of the suburban operation, an engine shed was incorporated into the plans of the Orpington station rebuild. The building that eventually transpired reflected the architectural style employed in the station structures, and could easily be mistaken for a product of the LC&DR. To the north of the platforms, a double-track through affair, constituted of crème brick and demonstrating arched orange window frames, emerged. Measuring approximately 164-foot down by 37-foot across, the building had a direct connection with a set of ‘’down’’ side carriage sidings beyond its northern end. A second set of sidings, to the shed’s south, had a trailing connection with the depot complex. Along the structure’s eastern elevation were the customary locomotive crew rooms and a two-storey-high 20-foot wide square-based water tank. The layout here was equipped with a 55-foot turntable, positioned beside the shed’s eastern elevation; this generous size allowed its use by the majority of the SE&CR’s tender locomotive fleet, in addition to the resident tank engines. Finally, a coaling stage was in evidence beside the building's approach tracks (all descriptions thus far are later illustrated in diagram form). The shed was coded ‘’7’’ by the SE&CR, and joined Bricklayers Arms, Cannon Street, and Slade Green as a depot situated within the suburban operation on the ex-SER lines. Bricklayers Arms mainly dealt with those locomotives assigned to freight work, but the latter two had locomotive allocations geared for passenger work. Building of the engine shed at Slade Green had in fact begun under SER auspices, as part of that company’s drive to modernise its locomotive operation along the North Kent routes. Opening in 1899, the eight-road depot replaced sheds at Woolwich Arsenal and Deptford. Similarly, the commissioning of the shed at Orpington, combined with the installation of connecting loops between the ex-SER and ex-LC&DR lines in the vicinity of Chislehurst, allowed the closure of the single-track dead-end ‘’Chatham’’ depot at Bickley. This diminutive shed dated from 1858.

Throughout its SE&CR career, Orpington’s locomotive allocation comprised mainly of ‘’H’’ Class and ex-LC&DR ‘’R’’ Class tank engines. The building’s existence in the engine shed capacity was, however, short-lived, and on the advent of the Southern Railway, considerable change was afoot. The SR swiftly implemented a programme of electrification of the ex-SE&CR suburban lines, using the LSWR’s favoured 600 Volts D.C. third rail system. Orpington became the first station on the ex-SER network to witness an electric service, scheduled working beginning from Victoria and Holborn Viaduct on 12th July 1925, by means of the Bickley Loops. Electric working to Charing Cross, Cannon Street, and London Bridge was possible from 28th February 1926, and it was the commencement of these services which brought closure to the shed at Orpington. Cannon Street and Slade Green sheds were dealt a similar fate, although the sheer scale of the building at the latter ensured a new lease of life for the depot as an EMU inspection shed. Much of the former site of Cannon Street’s depot quickly became home to one of the SR’s distinctive red-brick substations. Despite electrification, Orpington’s redundant shed retained its two tracks. Improvements to the semi-roundhouse at Horsham in 1927 saw the turntable at Orpington transferred to the former, replacing the existing 46-foot example. The 1935 extension of third rail to Sevenoaks saw those four ‘’down’’ sidings north of the shed absorbed into a then new 1050 foot-long EMU inspection and cleaning shed. Consequently, the direct connection between these sidings and the former engine shed was removed, but the redundant depot still retained its indirect link with the trio of sidings to its south, parallel with the ‘’down’’ side bay platform. By 1948, on the formation of British Railways, the shed building still had the physical rail connection with the aforementioned sidings. Furthermore, although the turntable had long since gone, the circular pit which once accommodated it was still in evidence. By this stage, the shed building had also been blocked off at its ‘’country’’ end, such occurring as part of the 1925 electrification.

The engine shed retained a rail connection and remained in service with the permanent way department until the advent of the Kent Coast Electrification Scheme's ''Phase 2''. Track revisions over the 1960 to 1962 period saw all rails lifted within the former engine shed area, but extensive rolling stock berthing sidings remained on site to be controlled by the March 1962-commissioned ''power box''. After finally losing its tracks, the redundant shed was internally partitioned and used as mess rooms and offices for railway staff. More change was, however, on the cards, as recently as 2007. In this year, work began on converting the building for use as a driver training centre. The procurement of the Class 395 ‘’Javelin’’ fleet required the installation of a driver simulator for this variant of EMU at an existing training facility at Ashford. Space limitations proved an obstacle at the Ashford centre, where six Electrostar/Networker simulators had already been installed during 2002, by contractors Corys T.E.S.S. (Training & Engineering Support Systems). The solution devised was to cascade three of the six existing simulators down to a new £325,000 driver training centre within the former engine shed at Orpington. The new facility was formally opened on the morning of Monday 5th November 2007, at 10:00, by the MP for Orpington, John Horam. The building has been partitioned into four air-conditioned classrooms, a fire officer’s room, and the customary mess room. 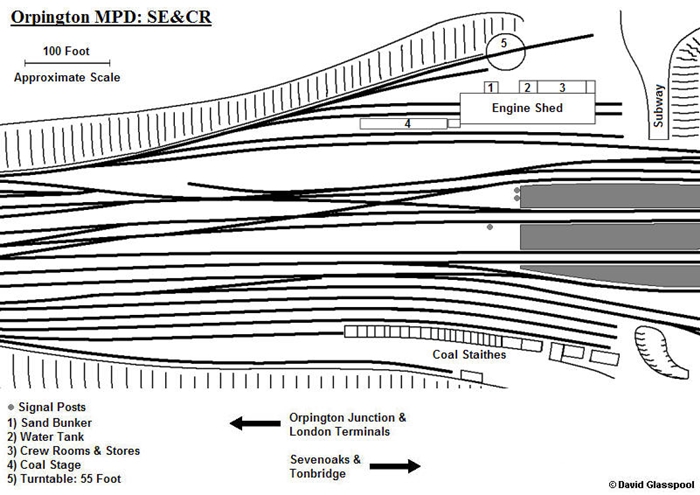 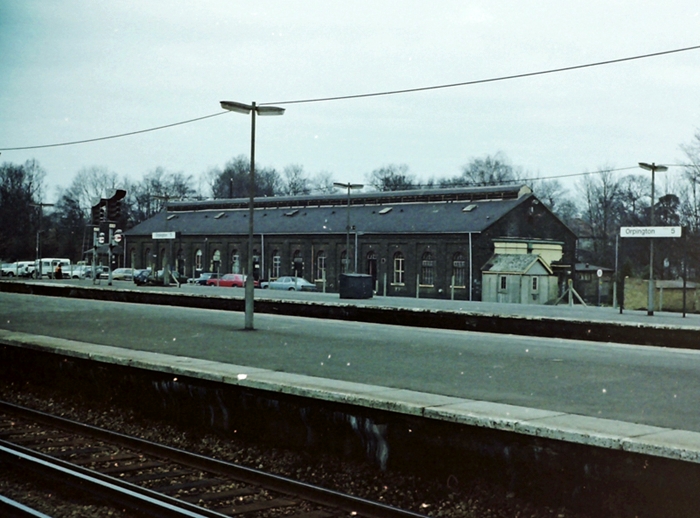 Viewed from platform 2, the former engine shed still had its original steam-era roof design in place, with all-over grime which no doubt dated back as far. © Kevin McArdell 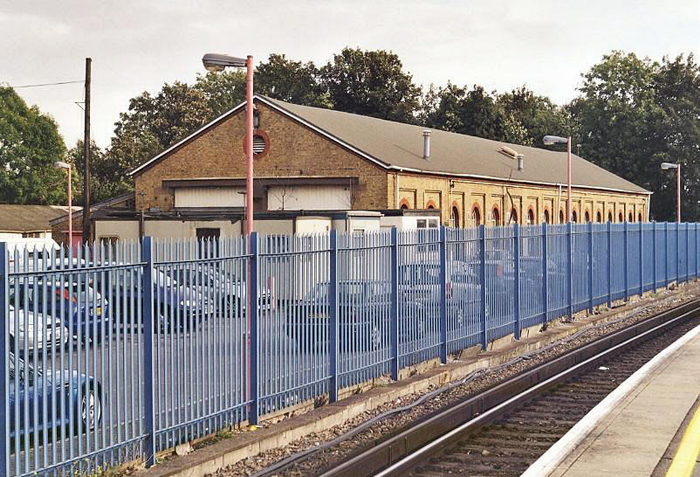 Seen over twenty years later, the building sported a simpler pitched roof design, covered with a layer of asphalt. The brickwork had also been cleaned up nicely and the windows restored. Where the two tracks used to enter the building is indicated by the large white doors, which now seal the entrance - even these are obscured by mobile offices. In the above view, the building is seen before driving simulators were installed. © David Glasspool 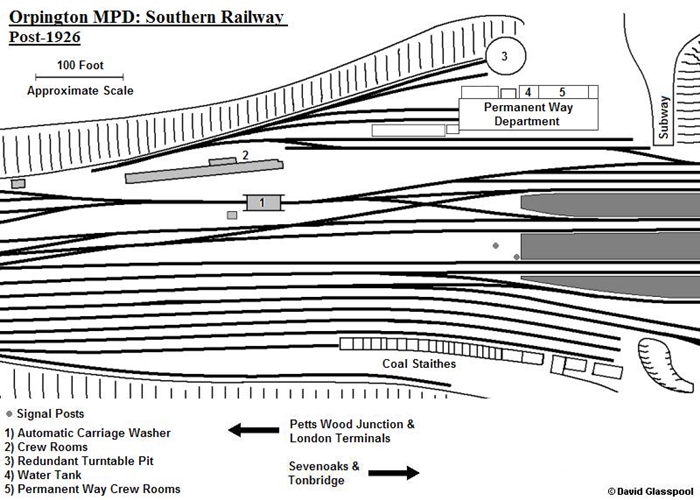