This station remains as a fine example of LC&DR architecture at its best, and has stood the test of time particularly well. Although quintessential railway features of the Victorian age have long since disappeared, such as mechanical signalling and a goods yard, Penge East nevertheless retains a bygone charm. The station came into use on 1st July 1863, when the LC&DR commenced through running between Beckenham and Victoria via Herne Hill. On the same day, the LB&SCR opened its own Penge station, which lied seven route miles distant of London Bridge and, as the crow flies, a mere 550-yards away from the LC&DR site. A station at Penge had opened with the original London & Croydon Railway on 5th June 1839, but had closed two years later. LC&DR and LB&SCR stations became ‘’Penge Lane’’ and ‘’Penge Bridges’’ respectively. Penge, a leafy suburb of London yet to be sucked into the urban sprawl, now had the good fortune of two alternate routes to the capital.

The LC&DR station was spacious, but the architecture was familiar. On the ‘’up’’ side could be found the main building, a mirror-image, if not marginally larger version, of that at Sevenoaks Bat & Ball. Yellow brick construction was used throughout, although arched window frames with red brick and stone lining were incorporated. This design was a running theme within the company’s subsequent station builds, and similar architectural features could be found in abundance on the Otford to Ashford line, via Maidstone. Windows were of the sash-style type, and the main building sported a splendid downward-sloping forecourt canopy, 55-feet in length, which matched the profile of the roof. The decidedly large building included living quarters for the Station Master (as was common at the time), and the latter even had the luxury of his own garden, immediately south of the structure.

Two platforms were in use here from the outset, situated either side of a double-track, and both were hosts to substantial canopies. The latter were each just over 150-feet in length, comprised intricate timber valances (elements of which can still be seen today), and were supported upon six iron stanchions. The permanent way was laid with rails weighing 70 lbs to the yard, fished at the joints, and rested on cast-iron chairs weighing 22 lbs each. The chairs were secured to the sleepers by oak trenails with spikes driven through them, 9/16ths inch in diameter by 5-inches long. The sleepers, half-round, and measuring in section 10-inches by 5-inches, were placed on average 2-feet 4-inches apart. In the station’s earliest years, a level crossing existed just beyond the southern ends of the platforms. This required a crossing keeper, who was provided with his own house on the ‘’up’’ side, 40-yards south of the main station building. This was built from the same yellow brick which constituted the platform structures, featured a slated pitched roof, and also had the luxury of its own private garden. Passengers had the choice of passing between the platforms by the crossing or a footbridge, the latter of which, too, was at the southern ends of the platforms.

A spacious goods yard existed at the northern end of the site, on the ‘’up’’ side. This was host to five sidings that had a trailing connection with the ‘’up’’ main line. Two of these tracks terminated within a substantial brick goods shed; the enclosed map shows these features, in addition to a pair of wagon turntables and a sixth siding, perpendicular to the rest. The goods shed was fabricated from the same yellow brickwork as that found in the main station building, and sported a splendid canopy running the length of its western elevation. Across the running lines, on the ‘’down’’ side, could be found a further pair of sidings, these of which were southward-facing; again, the enclosed map indicates the position of these. It is likely that these sidings were controlled by manual levers situated immediately adjacent to the sets of points. Although the station was host to a signal box from the outset, this was located at the southern end of the station, on the ‘’down’’ side, and it is likely that it was there solely to control the level crossing. 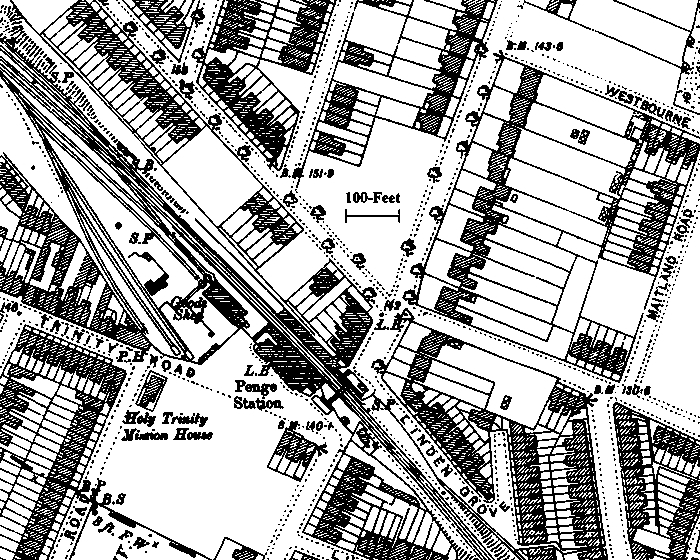 Ordnance Survey of Penge in 1894. The signal box in the top left portion of this map, marked ''S.B.'' is incorrectly positioned; it should be located a little further south, at the northern end of the ''down'' platform. In the goods yard can be seen the two wagon turntables mentioned in the main text, and the perpendicular siding. By this time, just one track entered the goods shed. 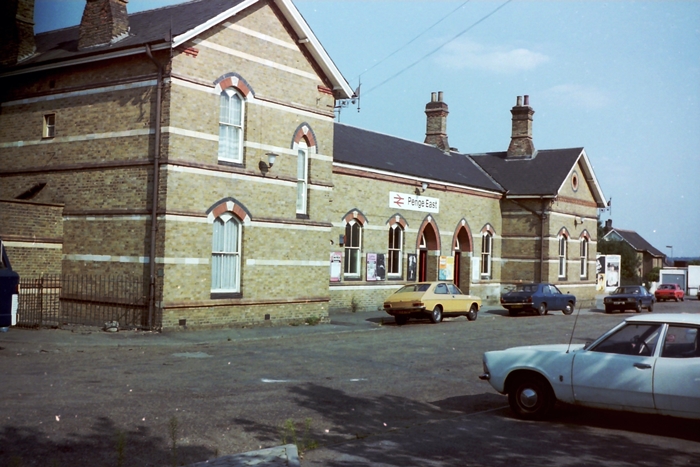 The fine station building, showing the LC&DR's trademark parti-coloured window arches, is more or less a mirror image of that at Bat & Ball, Sevenoaks, the latter of which opened thirteen months earlier. Similar architectural features can still be seen in abundance along the Swanley to Ashford line, via Maidstone East. © Kevin McArdell 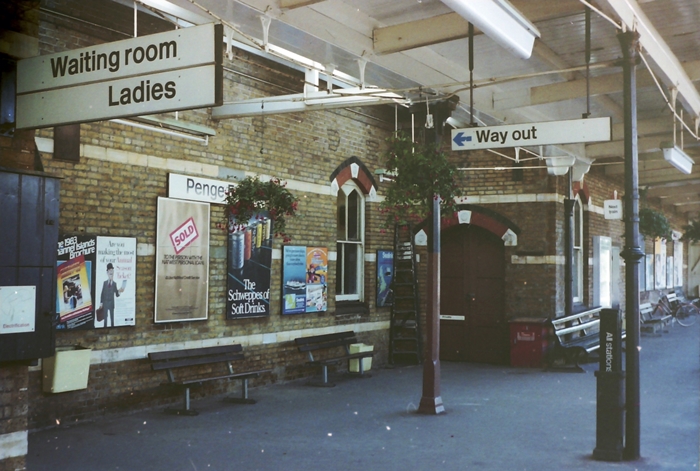 19th Century brickwork, 1970s British Rail signage, and early 1980s advertisements in evidence under the canopy on the "up" platform. The posters were promoting the 1983 Channel Islands holiday brochure, Schweppes soft drinks, and SeaLink. The latter was the ferry arm of British Rail, which was subsequently sold to Sea Containers for £66,000,000 in 1984. © Kevin McArdell 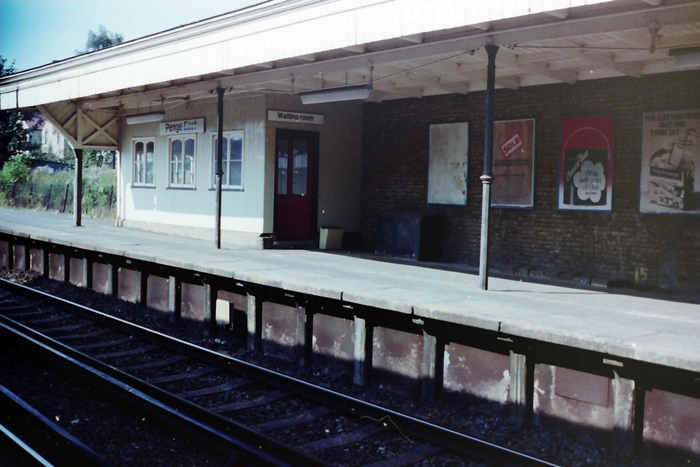 A once common sight, even at those stations with copious platform canopies. This timber-panelled waiting room could at one time be found on the "down" platform, at the London end of the canopy. © Kevin McArdell