Poor old Ryde Esplanade. Whilst still retaining a number of structural features dating from the site’s opening by a LSWR/LB&SCR coalition, this is a station which the local council is keen to raze to the ground and start again from scratch. Partial rebuilding and rationalisation since electrification of the route has left a rather sorry air over Esplande. A single platform canopy, timber booking hall, and wrought-iron gates still remind one of an earlier age of rail travel, but for how long?

The history of Ryde Pier is better handled in the Ryde Pier Head section, but a review of events is nevertheless appropriate here. The first pier to open on Ryde seafront was a 1740-foot-long timber structure, built to a design produced by J. E. Connor. This came into use in 1814, primarily to serve Portsmouth steamer ferries, and periodic extension over the years up to 1842 took the pier to an ultimate length of 2250-feet. To reach the shore, ferry passengers had a long walk ahead of them – when the St Johns Road to Shanklin railway was opened to traffic on 23rd August 1864, holidaymakers found themselves a mile from the nearest station. In the meantime, construction ensued on a second timber pier, immediately east of and running parallel with the existing structure. This was opened on 27th August 1864 and was undoubtedly a welcome relief for island-goers: it featured a double-track tramway to convey people from pier to shore. The tramway began life as a horse-drawn system, and on reaching the shore, the two-tracks curved round in an easterly direction. These ran roughly parallel with the shoreline for no more than 60-yards, and terminated at the tramway’s first station. This was an attractive affair, and incorporated a main building which was a near carbon-copy of those impressive, but unrelated affairs the South Eastern Railway commissioned at Chislehurst and Ashford stations. The structure was brick-built throughout, single-storey with a hipped roof, and was frescoed with pleasing semi-circular windows (again, the latter were identical to the type used by the SER at the aforementioned stations). An upward-sloping canopy was sprouted from the building’s north-eastern elevation, and since this followed the curved profile of the tracks, it widened from south to north.

The tramway had a couple of major flaws, namely that it was unable to cope with the ever increasing holiday traffic in the summer peak, in addition to the fact that it terminated ⅔-mile short of the Isle of Wight Railway’s St Johns Road terminus. Improvements were eventually forthcoming by means of a coalition between LSWR and LB&SCR companies, which intended filling the breach between steamer and station with a railway. Similar work had been undertaken on the mainland, when an extension to a much more convenient Portsmouth Harbour station took place on 2nd October 1876. On 23rd July 1877, the two concerns received Royal Assent for the construction of a double-track line, 1 mile and 19 chains in length, to directly link the steamer ferries with St Johns Road. Thus, yet a third pier was to come into use at Ryde, parallel and to the east of the existing structures, but of cast-iron rather than timber construction. Building work began in 1879, and involved excavating a 391-yard-long twin-bore tunnel underneath the seafront. Along this short stretch of line were to be commissioned two stations, one at the head of the pier and a second on the esplanade. At the latter, the site of the curving tramway tracks was required for a new station building. As a result, the tramway, its purpose seemingly negated by the coming of the railway, was diverted into a new terminus, directly end-on to the incoming rails from the pier. The new Ryde Esplanade station was an all-timber affair, keeping both costs and weight low, and was built on the curvature of the line from the pier, the head of which was 32 chains distant. Two platforms, approximately 380-feet-long, were established either side of the double-track: these simply comprised longitudinal timber planks supported upon the cast-iron frame of the pier. The surfaces were protected by 160-foot-long triangular canopies sporting ornate spiked valances, their design identical to those examples which came into use concurrently on the Pier Head. The ‘’up’’ side canopy was 35-foot wide and overhung both sides of the booking office. Interestingly, the earlier-mentioned terminus building of the tramway, which had now lost its tracks, was incorporated into the replacement railway station, as if by accident. The former retained its upward-sloping canopy, which became flush with the wide ‘’up’’ side canopy of the railway station. So, a peculiar arrangement transpired whereby the former course of the tramway was preserved underneath two separate canopies of varying ages. On the ‘’down’’ platform, single-storey timber offices backed onto the canopy. Within the 32-chain extent of the pier railway existed two signal cabins, one at the Pier Head and another at Esplanade. The latter could be found at the southern end of the station’s ‘’up’’ platform, and comprised a brick base and timber upper half. The Pier railway came into use to rail traffic on 5th April 1880. 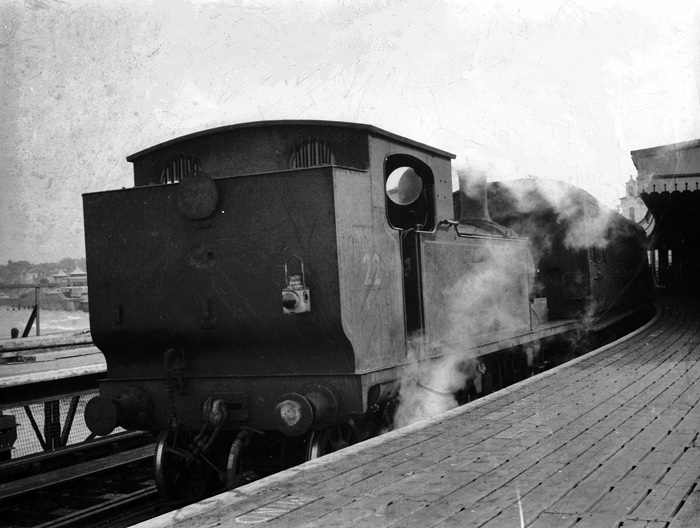 Head. In this view can be seen the intricate ''up'' canopy and that the platform is formed of timber planking. 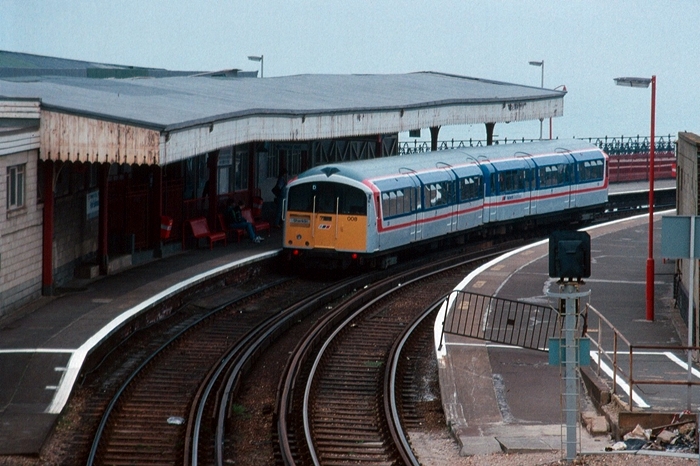 The canopy was showing obvious signs of warping as Class 483 unit No. 483008 was seem departing for the

Pier Head. Underneath the canopy, one can just about decipher the vintage iron rails and office frontage. On

the extreme left can be seen those structures erected during 1973, when a new bus station was provided. On

the right is the ''down'' platform, by that time little used. © David Glasspool Collection Fifteen years later, a general overview from the same viewpoint shows that the rails of the ''down'' side had

become completely rusty, and the platform alongside virtually disused. In the foreground, it is evident that

the ''down'' line is equipped with a set of catch points. David Glasspool