Sadly, there is little charm left at this station, which originally opened on 9th July 1860 with the London, Chatham & Dover Railway's Faverham to Canterbury extension. Perhaps the site avoids falling into the completely nondescript station category by the retention of vintage iron railings on both platforms, the former Station Master's house (albeit in private ownership) on the "up" side, and a classic lattice footbridge. Presumably the latter will be removed at some point when a structure incorporating lifts is required, unless the fact that it also carries a public footpath can save it.

Selling was commissioned with two platforms, that serving London-bound traffic being host to the main building. This was a single-storey tongue-and-groove timber affair, featuring sash-style windows, all set upon a shallow brick base. The building's arrangement was such that it was essentially a timber version of the structure at Adisham, minus the latter's second storey. Slated pitched roofs were in evidence and the main building also sported an intricate canopy valance built to a standard LC&DR design (still a feature of Shepherds Well). On the ''down'' platform, waiting passengers were afforded a 30-foot-long timber waiting shelter. This comprised wraparound sides, a canopy valance, and was built to a standard design which came into use at sister stations at Adisham and Shepherds Well. Finally, a large property for the Station Master, two-storeys high, of creme brick construction and with sash-style windows, was erected midway along the "up" platform.

Goods facilities were concentrated at the Canterbury end of the layout, sidings flanking the running lines on either side; no doubt the surrounding fields provided a good quantity of traffic at one time. A single refuge siding, southward-facing, was evident on the "down" side, this being about 220-yards long and terminating at the end of the platform. The "up" side was a little more complicated, a single northward-facing connection with the "up" line eventually sprouting four sidings, two of which required a head shunt manoeuvre to access. The layout is illustrated in the below diagrams, but it is worth mentioning that one of the "up" sidings terminated within a clapboard goods shed. A public footpath also crossed all tracks on the level at this point.

An upgrade to the early signalling came in about 1880, when Saxby & Farmer was contracted to install one of its cabins at the southern end of the "up" platform. The signal box was set upon the platform surface and was built to the contractor's standard design of the time, comprising hipped slated roof, timber upper half, and a shallow brick base. In combination with this, the "down" refuge siding was extended behind and beyond the northern end of the platform. A trailing crossover was also installed between the running lines, south of the platforms. Other alterations in the track layout can be found in the subsequent diagrams.

From the outset, passengers had walked between platforms using a track foot crossing. This was superseded during the SE&CR era, some time after 1908, by a lattice footbridge. 80-feet in length, the footbridge was installed at the southern ends of the platforms and, in addition to use by railway passengers, it formed the course of a public footpath. The latter was the footpath which, hitherto, had crossed the tracks in the vicinity of the goods yard, but was subsequently re-routed 70-yards north to meet the bridge.

The Southern Railway re-faced the platforms' sides with prefabricated concrete, manufactured at the company's own works at Exmouth Junction. However, more significant were those works carried out by British Railways in connection with Phase 1 of the Kent Coast Electrification Scheme. In 1959, the "up" and "down" platforms were lengthened by 145-feet and 165-feet respectively at their northern ends; short extensions were also made to the south, which saw the truncation of the dock line. At the same time, concrete bracket lampposts were installed along the full extent of both platforms.

Selling resided on that section of the "Chatham" main line which was not subject to re-signalling as part of the 1959 electrification scheme, the accelerated timetable of which came into use on 15th June of that year. As a result, it retained its Saxby & Farmer cabin controlling semaphores and, additionally, an operational goods yard. The latter closed to public traffic on 5th November 1962 and the sidings on the "up" side were lifted. However, the lengthy "down" refuge siding, which passed behind the platform and under the footbridge, remained, as did the trailing crossover between the running lines.

By 1990, the "down" refuge siding was still in evidence, but had been cut back to the footbridge. However, the station was to be dealt a significant blow later that decade: on 22nd January 1995, the main building on the "up" side was tragically destroyed by an arson attack. All that remained of the structure was the brick appendix at the south, which formerly housed the gentlemen's toilets. The structure was replaced by a soulless bus shelter-type affair, little more than 10-feet-long. The signal box survived and, in that year, was dismantled and eventually transported to Eythorne, on the fledgling East Kent Railway, for preservation.

Unfortunately, the station's woes did not end there. Another survivor of the 1995 fire was the "down" side waiting shelter, which dated from the station's earliest years. Regrettably, this LC&DR artifact was demolished in 2009, as part of a general programme across the former South Eastern Division to provide new platform shelters at stations. The shelter of 1995 was also removed at this time, new glazed structures with curve roofs coming into use on either side of the lines.

Layout prior to addition of footbridge and relocation of footpath. Click the above for a larger version. © David Glasspool 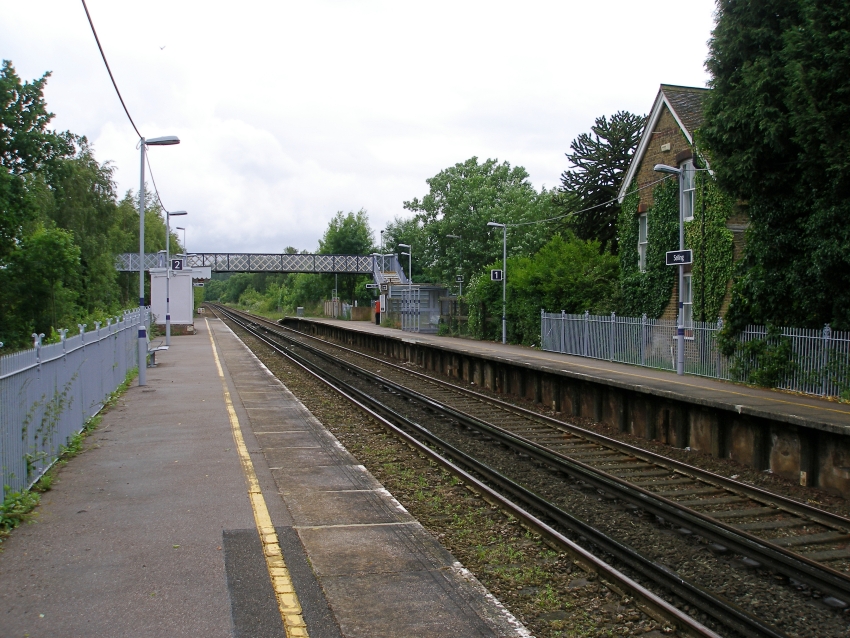 A Canterbury-bound view shows vintage LC&DR iron railings on either platform, the original Station Master's house creeping out from behind the vegetation, the "down" waiting shelter of similar vintage and, prominent in the background, the SE&CR lattice footbridge. © David Glasspool

Layout after Kent Coast Electrification platform extensions, but also including those later modifications made by SE&CR. Click the above for a larger version. © David Glasspool 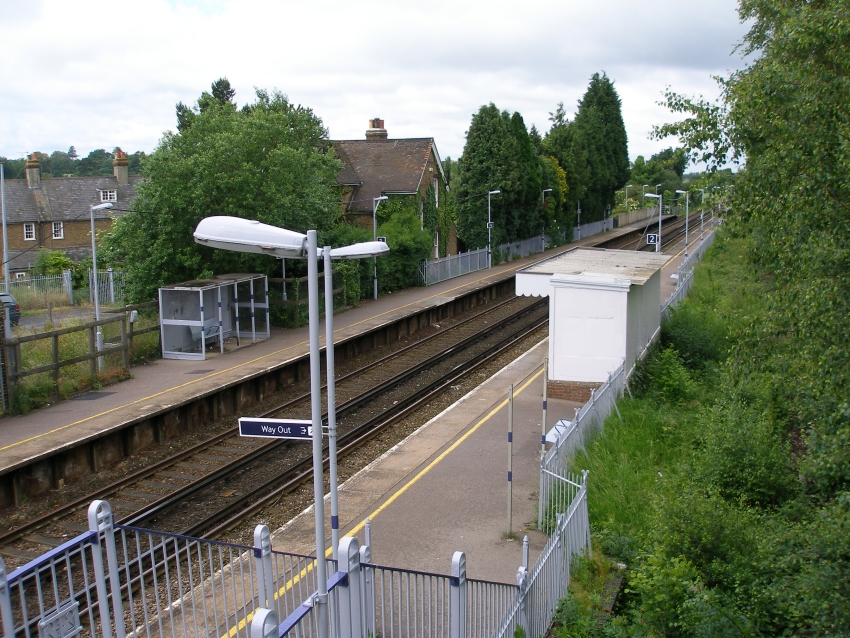 A Faversham-bound view from the footbridge shows, on the right, the overgrown track bed of the former "down" refuge siding. David Morgan recalls that this siding was at least in part electrified (third rail) and could therefore be accessed by Class 71 locomotives until their demise in 1977. It was regularly used for stabling trains of ferry wagons en route to Dover at times when disruption or heavy traffic affected the train ferry service. The long siding on the "down" side at Shepherds Well was also retained for this purpose following the end of coal traffic from Tilmanstone, albeit this was not accessible to electric traction. The "up" shelter of 1995 is in evidence on the left, with the LC&DR shelter on the right; both were demolished in the following year. The 1959 platform extensions can be seen in the background. © David Glasspool

Layout after the abolition of the "up" side goods yard. Click the above for a larger version. © David Glasspool 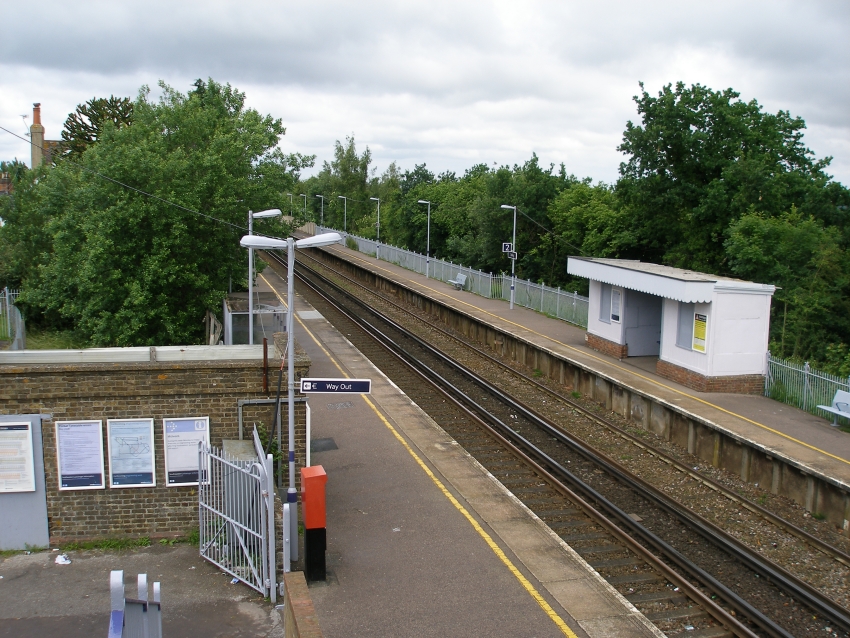 The brick wall on the left once formed part of the Gentlemen's toilets. It attached end-on to the timber station building, the site of the latter having returned to nature by the time of this photograph. © David Glasspool