This is now the southern terminus of what was always the most profitable part of the Isle of Wight's railway network. Since the earliest years of ''railway mania'' in 1845, the inhabitants of the Isle of Wight had been against the laying of tracks on their land. The island, at 21-miles across by 13-down, was seen as being too small for any form of railway to be worthwhile, and the laying of tracks from north to south and east to west would turn the Isle of Wight into a giant ''hot cross bun''. The ''needless'' railway was said to be more useful on the Isle of Dogs, in East London, where it would not ruin a scenic landscape which people crossed the Solent to enjoy. The views of island folk had perhaps mellowed over the subsequent fifteen years: on 23rd July 1860, the ''Isle of Wight (Eastern Section) Railway Company'' (IWR) was incorporated to build a railway from the pier at Ryde, to Ventnor, with branches to Brading Quay and Sandown Bay, creating a network of 12 miles 3 chains extent. The company was initially authorised by Parliament to raise a capital of £125,900 by the issue of £10 shares, in addition to taking out loans amounting to £41,600. The railway came into use between Ryde and Shanklin on 23rd August 1864. The first train comprised a trio of four-wheeled carriages, hauled by Beyer-Peacock 2-4-0 Tank No. W13 ''Ryde''. A northward extension from Ryde, to the pier, was left to a later LSWR/LB&SCR collaboration.

Shanklin station began life as an attractive single-platform affair, host to an imposing main building of yellow brick construction. The design of the latter was somewhat reminiscent of those large structures which were commissioned by the LB&SCR on their Sussex lines (such as the ''Bluebell & Primrose'' between East Grinstead and Lewes), save for the absence of hung clay tiles on the outer walls of the first floor. The bulk of this building was constituted of a spacious two-storey-high house with gabled roof sections and, on the platform, a ground floor bay window. The first floor was the residence of the Station Master, whilst the ground floor formed the booking hall. Either side were sprouted single-storey appendices, giving the building an overall length of 90-feet: that to the south, which appears to have been the station's first waiting room, measured 90-feet in length, sported a slated pitched roof, and came complete with a downward-sloping platform canopy. The single-storey section north of the Station Master's house seems to have housed the ticket clerks and the Station Master's office - it is worth noting that this was completely flat-roofed. Windows were of the sash-style throughout.

The early track layout here was simple, comprising the platform line and a run-a-round loop. In spite of being the end of the line for the first two years of its existence, the station was not host to a turntable, presumably in light of the forthcoming extension to Ventnor. Of those turntables used on the island, these generally did not fully rotate a locomotive, but were instead used as a substitute for a set of points in areas with limited space. A single-track carriage shed, of all-timber construction, was positioned to the north of the platform. As the below track plan illustrates, access to the shed was afforded by a reversal manoeuvre into a head shunt. The fact that the timber cladding did not extend all the way down to the foot of the building gave the impression that the shed was upon stilts! The southward extension of 4 miles 16 chains to Ventnor opened to passenger traffic on 10th September 1866, but the layout at Shanklin remained virtually unchained. By 1880, the station still commanded just a single platform, and no additional sidings had been laid. Within the subsequent fifteen years, however, the site was upgraded substantially. A second platform, 435-feet long, came into use on the opposite side of the passing loop formation, and the existing surface was lengthened to 420-feet. The run-a-round loop was itself lengthened, and the bridge immediately south of the station was rebuilt to carry a double-track. Both platforms were carried across the road bridge at the southern end of the layout. The original station building was greatly enlarged: a 55-foot-long red-brick extension, featuring a hipped slated roof, was built on the southern side of the old structure. This became the new, much larger, booking hall. The portion of the existing building which formed the Station Master's residence also had a curious addition: a Gothic tower, worthy of the fictional ''Addams Family'' house, now emerged from the gabled roof. The main building was also further lengthened at its northern end, this extension being made in crème brick to match the existing structure. To complement the larger buildings, extensive canopies were erected on both platforms: that on the original surface measured about 175-feet in length, whilst its counterpart on the new platform was ten feet longer. The canopies comprised attractive spiked timber valances and were built to a standardised outline  ̶  near identical examples were erected at all other stations along the route, including the Bembridge branch. As was the case at Sandown, which sported a very similar yellow-brick main building, Shanklin's platforms were linked by a subway at their southern ends.

Shanklin station after extension to Wroxall and Ventnor. Drawn by David Glasspool 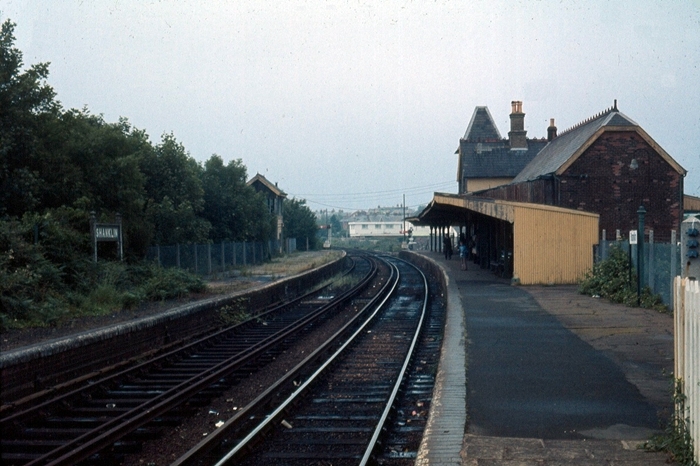 A northward view, more than ten years after the closure of the Wroxall and Ventnor section, still shows both

platforms, complete with electrified lines. Notice the starter semaphores at the end of each platform. Emerging

through the vegetation can just be seen the Saxby & Farmer signal box, whilst nearer the camera, on the left,

remains an SR green run-in name board, complete with concrete posts. The name boards on the ''down'' side

had already been switched to the plain black and white variant, implemented nationwide from 1965 onwards

as part of the re-branded ''British Rail''. The main building on the ''down'' side was fully intact, and its canopy

was wholly complete. The rusty rails of the ''up'' side show just how little used this track was. 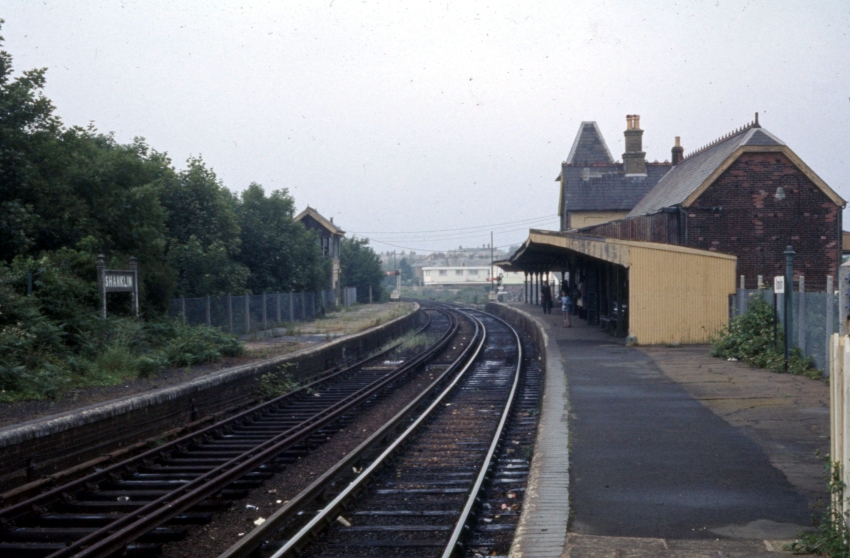 A southward view shows that much track still existed beyond the platforms, and that third rail was laid past

the points. The rails were covered in rust from the signal post onwards, showing that only the former ''down''

line as far as the platform's end was regularly used. © David Glasspool Collection