Sheerness Dockyard dates back to King Charles II, who reigned England, Scotland, and Ireland from 1660 to 1685. It began life as a fort to defend the entrance to the River Medway, but was destroyed in June 1667 by an attack from the Dutch fleet during the Second Anglo-Dutch War. It was subsequently rebuilt with more robust defenses, a garrison being stationed there to control a line of large and heavy cannons, and by 1840 had grown to a size of about sixty acres. At this time, Sheerness Dockyard was principally used for light repair work on ships, and building frigates and smaller vessels. It joined Chatham, Deptford, Pembroke, Plymouth, Portsmouth, and Woolwich on the list of Royal Dockyards, although was only of secondary importance given that it could not accommodate the biggest warships of the time.

On 7th July 1856, the "Sittingbourne & Sheerness Company" was incorporated by an Act to build a single-track railway, 7-miles 1-furlong in length, from the East Kent Railway's proposed Faversham to Chatham line at Sittingbourne, to the Isle of Sheppey. Capital of £80,000 was authorised in the form of £10 shares, in addition to £26,600 in loans. John Cass Birkinshaw was selected as engineer for the line; he was also appointed to this post for the ‘’Lymington Railway Company’’ in Hampshire, which was incorporated on the same day as the Sittingbourne & Sheerness Company.

Perhaps Birkinshaw's preoccupations with the Lymington Railway became too much, for he was sacked from his position with the Sittingbourne & Sheerness Company midway through the branch's construction. The Board of Directors blamed him for slow progress of building and he was replaced by T.E. Marsh, the line between Sittingbourne and Sheerness finally opening to traffic on 19th July 1860. The railway had cost £15,000 a mile to build and in spite of his dismissal, Birkinshaw had left his mark on the project at Queenborough, where a station constructed to his design was commissioned. Still in existence today, the main building at Queenborough is worthy of comparison with Birkinshaw's very similar work at Lymington Town.

The line terminated at a station called plain "Sheerness", on the southern fringes of the dockyard. This comprised two platforms separated by an equal number of tracks, end-on to which was a neat single-storey brick main building with a slated pitched roof, housing the booking office and waiting room. The tracks were covered by a pitched overall roof, essentially built to the same plain design as that which came into use at Canterbury (East) on the LC&DR. The terminus was built on a perfect north to south alignment; to its east existed two sidings, one of which passed through a brick-built goods shed, and both terminated in line with the main station building. Finally, to the south of the station, again on the eastern side of the lines, could be found a single-track engine shed. This was a through affair provided with both a store and water tank, and a turntable existed just to the building's north.

The terminus at Sheerness resided &frac12-mile west of the town's nucleus, a scenario which later gave birth to a scheme to provide a more convenient station. This involved constructing a spur, about 0.6-miles-long, from the throat of the terminus, eastwards to a new set of platforms. The latter formed what became "Sheerness-on-Sea" station, and this came into use with the spur on 1st June 1883. To access this line, all trains had to reverse into the original terminus, which had been renamed "Sheerness Dockyard" as a result of the opening. This two-station operation lasted until 8th November 1914, when the more recent Sheerness-on-Sea station was closed as a wartime economy. Thereafter, the Dockyard terminus handled all passenger traffic. 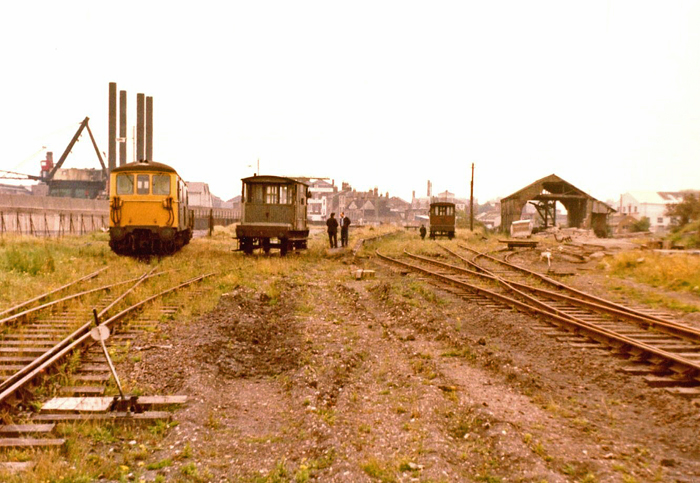 This is a northward view of the former Sheerness Dockyard station site. The western of the two platform surfaces was still in evidence at this time, and can be seen to the immediate right of the Guard's Van. On the far right is the derelict goods shed of 1860 origin, which appears to be in the process of being demolished. The Electro-Diesel is sitting on the single-track connection to Sheerness Dockyard - it had just completed a test run into the dockyard site. This area was swallowed up into the steelworks' construction site in 1971. © Roger Goodrum 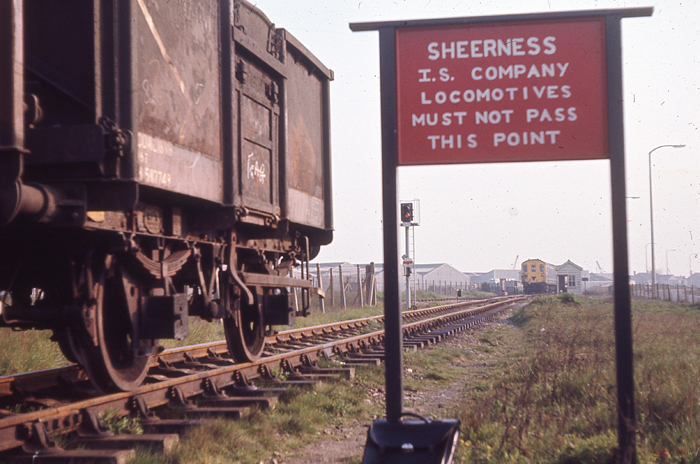 Looking south, this view depicts Sheerness Dockyard Junction, which is at the southern part of the triangle formed by the lines to the dockyard, steel works, and railway station. What is likely to be a 2-HAP is seen approaching the junction, and this unit will veer left for the terminus of Sheerness-on-Sea. Alongside can be seen the diminutive timber signal box which controlled the junction. The sign indicated the southward limit of operation for locomotives of the privately-owned steel works. Prominent on the left is one of British Rail's standard design 16-ton mineral wagons, No. B587749, which at that time had the word "COAL" painted in the lower corner. © David Glasspool Collection 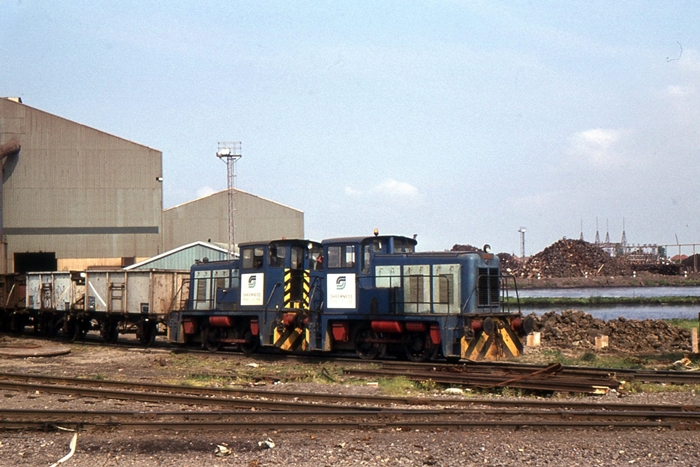 In view are the works' first ever diesel shunters, which came into service when the complex opened in November 1972. Note that they are shunting unfitted 16-ton mineral wagons that have arrived from Willesden with scrap. © Roger Goodrum