The railways in the area have a very complicated history, several independent concerns having been formed to build sections of what eventually became constituents of the ‘’Chatham’’ main line. Rails have been in the vicinity since 1858, when the ''West End of London & Crystal Palace Railway'' (WEL&CPR) commissioned a double-track line between Norwood (Junction) and Shortlands (then known as ‘’Bromley’’). This formed the final section of the company’s line from Battersea, and powers for the extension had been obtained in 1854. The WEL&CPR came into use piecemeal:

Another independent company known as the ‘’Mid-Kent Railway’’ commissioned an extension of WEL&CPR metals between Shortlands and Southborough Road (Bickley). This came into use on 5th July 1858 and was leased by the SER from the outset, as a continuation of the route from Lewisham. By this time, the ‘’East Kent Railway’’ (EKR) had advanced on its approach to the capital, and in the following year it connected with the Mid-Kent Company at Southborough Road, by means of its ‘’Western Extension’’ from Strood. The EKR was known as the ‘’London Chatham & Dover Railway’’ from 1st August 1859. From 3rd December 1860, the company commenced through running between Victoria and Canterbury, taking over the lease of the Mid-Kent Railway from the SER. Between Shortlands and Grosvenor Bridge, the LC&DR ran over the metals of the WEL&CPR.

Advent of the Junction

The WEL&CPR had previously been absorbed by the LB&SCR on 1st July 1859, and as a consequence, the LC&DR was subject to the tolls of its Victoria terminus rival. This situation eventually came to an end in 1863 when, on 1st July of that year, the latter completed an avoiding line between Beckenham and Stewarts Lane, via Herne Hill. The original WEL&CPR became little more than a local traffic line, the LB&SCR itself having commissioned a cut-off route between Balham and East Croydon on 1st December 1862.

The need for a relief line was brought to the fore by the LC&DR in 1884. The company began lobbying Parliament for powers to commence work on an alternative route to its existing trunk line between Shortlands and Brixton, via Penge. The company proposed a double-track affair, 4.7 miles in length, spurring off the existing Crystal Palace and Blackheath Hill (later Greenwich Park) branches at Nunhead, subsequently re-joining the trunk route at a flat junction to the north-west of Shortlands station. Royal Assent was finally acquired in 1889, resulting in the formation of the nominally independent ''Shortlands & Nunhead Railway Company'' on 12th August of the same year. Building works were completed in 1892, scheduled passenger services commencing on 1st July of that year. Dubbed the ‘’Catford Loop’’ from the outset, the diversionary route allowed an additional twenty-one trains to be run between Bromley, Bickley, and the City. Coinciding with these improvements was the acceleration of trains on both Crystal Palace and Greenwich Park branches by between five and six minutes. The Catford Loop was leased by the LC&DR until 1896, when it absorbed the independent Shortlands & Nunhead Company.

Concurrent with the commissioning of the Catford Loop, the LC&DR had already set its sights on quadrupling the Shortlands Junction to Bickley section of the main line. The works were extensive, and included comprehensive rebuilds of the original stations at Shortlands, Bromley LCDR, and Bickley, involving the provision of four platform faces at each site, arranged in the form of two islands. The widening covered a route mileage of 2¼ and crucially, expresses were now able to overtake stopping services. Hitherto, Catford Loop trains had blocked the running lines when stabled at the original Shortlands layout, where just two platform faces were available. Signalling of the new arrangement was carried out by the LC&DR’s favoured contractor, Saxby & Farmer, and two attractive cabins, built to a standardised design, appeared at Shortlands. The first was positioned at the ''Chatham'' end of the layout, on the ‘’up’’ side, perched upon the edge of the embankment; the second cabin was erected about 330 yards to the north west of the station, on the ‘’down’’ side of the tracks, immediately before the junction of the diverging Catford and Penge routes. Quadruple-line working formally commenced on 1st May 1894, and tracks were paired by direction.

Electrification of the inner suburban lines was proposed by the SE&CR in 1921 and was to be started when finance was available. The company was superseded by the Southern Railway in 1923, and the latter swiftly implemented LSWR-inspired third rail on these routes. Work began in 1924, the first routes to be affected including:

Alterations at Shortlands included the erection of a three-storey-high electric substation within the fork of the junction. It was reported in November 1924 that the steel framework of this structure had been completed and that erection of the red brickwork had commenced. The substation housed a trio of 1,500kW rotary converters, which were ultimately fed current from the Deptford Power House of the London Electric Supply Corporation, via the SR’s huge electric substation at Lewisham. Electric multiple units on staff training runs from St Pauls (renamed ‘’Blackfriars’’ in 1937) reached Shortlands on 8th June 1925. Scheduled electric suburban services from Victoria and Holborn Viaduct, to Orpington, commenced on 12th July of that year.

During 1925, signalling alterations were also enacted at Shortlands. These included the abolition of the station’s signal box, at the ''Chatham'' end of the layout, on 20th December. The Saxby & Farmer cabin beside the junction remained, and its 53-lever frame controlled a slightly revised arrangement which enabled the termination of Catford Loop services in the ‘’down’’ local platform (No. 4).

Formally approved in February 1956, Phase 1 of the Kent Coast Electrification aimed to ease speed limits at the junction, provide an additional track on the ‘’up’’ side of the diverging routes, and completely modernise the signalling. Alterations here required the rebuilding of those bridges at the London end of the station, as the track level was raised, and also involved the construction of a new ‘power box’’ within the fork of the junction. Re-signalling saw that the tracks of the quadruple-line section were now paired by use, whereby adjacent tracks now carried trains in alternate directions. This, combined with the addition of a single-track on the ‘’up’’ side of the layout, ensured that services travelling via Penge East could completely bypass the junction, avoiding conflicting movements with Catford Loop trains. Speed limits at Shortlands Junction increased from 40 MPH to 60 MPH for the main line, and trains using the Catford Loop connection were subject to a limit of 40 MPH.

Construction of the ‘’power box’’ was completed by July 1958, and this was equipped with a push-button route setting panel. Colour light signalling between Beckenham Junction and Swanley, and Bellingham and Shortlands Junction, came into use on 31st May 1959, two weeks before the end of scheduled steam on the ‘’Chatham’’ main line. To the east, the range of Shortlands Junction ‘’power box’’ extended to Bromley South (inclusive). The full accelerated electric timetable on the route came into effect on 15th June 1959.

On 16th March 1980, the Victoria Signalling Centre came into use at Clapham Junction. This led to the redundancy of numerous individual signal boxes, and over subsequent years the panel’s scope was increased. On 20th June 1982, the panel took over the functions of the ‘’power box’’ at Shortlands Junction, and on 12th June of the following year, the scope of the signalling centre was extended to meet the boundary of Rochester’s ‘’power box’’. At this time, Chislehurst Junction signal box ceased to control the ‘’Chatham’’ main line, but remained operational for the Tonbridge Cut-Off route. Shortlands Junction ‘’power box’’ was taken over by the permanent way department.

Arguably, the most radical changes at Shortlands Junction since the quadrupling of 1894 were those undertaken in connection with the opening of ‘’Section 1’’ of the CTRL. On 1st June 2000, Railtrack applied to the Department of the Environment, Transport, and the Regions (DETR), for authorisation to construct a grade-separated junction at Shortlands. Railtrack claimed that the work was essential to ensure that punctuality and reliability of commuter services was not adversely affected when an accelerated Eurostar timetable came into use in September 2003. The planning application specified the acquisition of further lands to accommodate an enlarged layout, and the retention of both substation and signal box structures. The plans met formal approval on 22nd June 2001.

Earthworks were substantial. The project involved retaining a double-track flat junction between the Catford Loop and the slow lines, but would also see the creation of a completely new double-track underpass between the Catford Loop and the fast lines. The reasoning behind this was to eliminate conflicts of movements between Catford Loop traffic using the fast lines and those services travelling via Penge East. On a par with the works of the Kent Coast Electrification, a single avoiding track on the ‘’up’’ side was to be retained as part of the new layout, to allow main line traffic to completely bypass the junction. The new connection with the Catford Loop was taken under the departing Penge East route through a 70-metre-long (76½-yards) reinforced concrete box, producing a descending gradient in the Catford direction of 1 in 50. By April 2002, the majority of earthworks and tunnel construction had been completed, and the laying of about a mile’s worth of new track ensued. The works were completed in June 2003, and Eurostar services began running via Fawkham Junction, to reach the CTRL’s ‘’Section 1’’, on 28th September of that year. Design and construction of the new arrangement had been subcontracted to civil engineering firm ‘’Osborne’’, at a cost of £15.5 million. 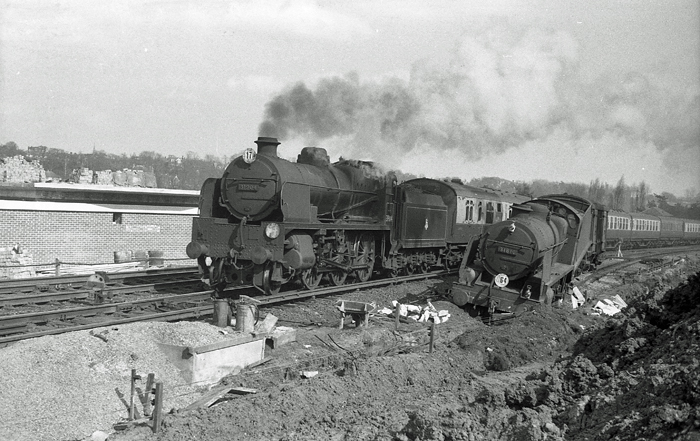 The doyen of the Maunsell "N" Class, which emerged from Ashford in 1917, No. 31810 is seen after coming to grief at the end of the "runaway" siding alongside the "up" main to Victoria via Beckenham Junction. Maunsell "U1" Class No. 31904 is seen passing with a train from Ramsgate to Victoria, comprising mostly of Bulleid coaching stock. To the left of No. 31904 can be seen the base of the "power box", which was then under construction in connection with the Kent Coast Electrification Scheme. © David Glasspool Collection 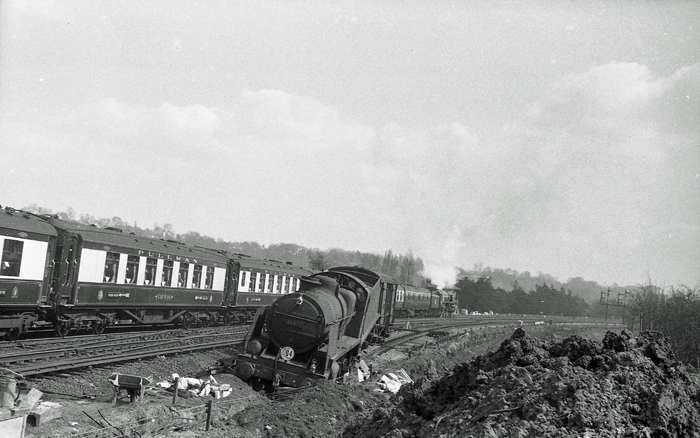 The "down" working of the famous "Golden Arrow" is seen passing stricken No. 31810, hauled by one of Stewarts Lane's two "Britannia" engines, No. 70004 "William Shakespeare". No. 70004 was transferred to the Midland Region later that year, with class mate No. 70014 "Iron Duke", both going to Kentish Town (14B). In spite of this incident, it was not the end for No. 31810, and the locomotive remained in service until March 1964. In the distance, on the right, can be seen the semaphore signal gantry for the junction, controlled from the signal box mostly obscured by No. 70004. © David Glasspool Collection 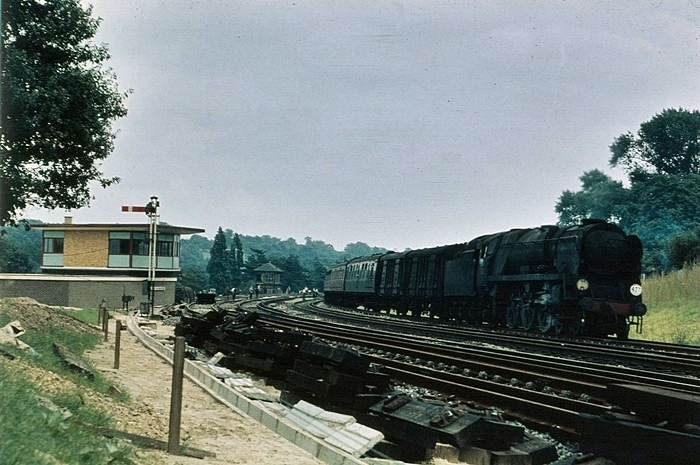 Change is imminent as a filthy West Country Class rounds the curve at Shortlands Junction with a Dover Marine to Victoria boat train, via Penge. In tow are a pair of baggage vehicles and a Blood and Custard Maunsell coach, the latter sandwiched in-between a pair of green Bulleid-designed carriages. In the distance can be seen the Saxby & Farmer signal box of 1894 origin, complete with pyramid-shaped roof. On the left, in the foreground, is the replacement ''power box'', yet to be commissioned and situated behind a still operational ''home'' semaphore signal. © David Glasspool Collection

Track plan after Railtrack alterations for Chunnel passenger services. Click the above image for a full-size version. © David Glasspool