This is one of eight infamous tunnels on the Tonbridge to Hastings line which, for over 130 years, prevented the use of standard width rolling stock. It is not the worst offender, however, and the tunnel's narrow dimensions can be attributed to the fact that the branch to Tunbridge Wells started out as a single-track affair. Construction of the line began in July 1844; in April of the following year, the decision was taken to make the branch double-track throughout. By this time major works, such as Powder Mill Viaduct and this tunnel, were largely complete.

Vauxhall Tunnel, as it was known from the outset, was located 44-chains south of the junction with the main line at Tonbridge. The tunnel was excavated through a layer of blue marl, and such was the nature of this clay that the tunnel had to be considerably strengthened. The 420-yard-long bore was lined with 2-feet of brickwork, laid in cement for its entirety, and the foundations held in place by an inverted arch. The latter was 18-inches thick, had a span of 21-feet, a depth of 3-feet 3-inches and, again, was laid in cement. The portal arches were semi-elliptical, spanning 23-feet 2-inches at their widest points, and rose to a height of 22-feet 3-inches. Through the tunnel, the line ascends on a gradient of 1 in 100 from the Tonbridge direction. The engineer for the entire branch was Mr Peter Barlow, and building work was put out to tender, Messrs Hoof & Son being awarded a contract worth £50,000 (£4,047,300 at 2008 prices). The route was passed as fit for traffic on 19th September 1845, and scheduled services commenced the following day.

The tunnels which have attracted most of the attention are those south of Tunbridge Wells Central, which are worthy of a brief mention. The line between here and Robertsbridge was built by a second contractor, H. Warden, but nevertheless engineered throughout by Barlow. Through running between London and Hastings via Tunbridge Wells was possible from 1st February 1852, but trouble was soon afoot. In March 1855, approximately 12-feet of brickwork fell from the bore of Mountfield Tunnel, which prompted inspection of other tunnels along the route. It was soon discovered that the building contractor had failed to line the tunnel bore with four brick ring layers, as specified by the engineer. In Grove Hill Tunnel, there was just a single brick layer, laid upon cement, of which behind there were large holes which should have been backed up by earth. Strawberry Hill Tunnel was found to have two brick rings in place, the other pair of layers being made up of loose bricks and rubbish. In January 1861, the SER legally challenged the contractor, and the Courts awarded the former £3500 in damages in the following February. Grove Hill and Strawberry Hill Tunnels were subsequently strengthened by the SER with an additional two layers of brickwork, which cost the company £4700 and reduced the tunnels' height and width by 9-inches and 18-inches respectively.

For long this route has employed tailor-made stock, narrow enough to negotiate the thin tunnel bores which continued to host double-track. As part of the Hastings line electrification, it was decided to degrade sections of the line through some of the tunnels to single-track, to allow existing standard-width electric stock to be used between Tonbridge and Hastings. Somerhill Tunnel was so treated in January 1986, and a full electric timetable along the entire route commenced on 12th May of the same year. 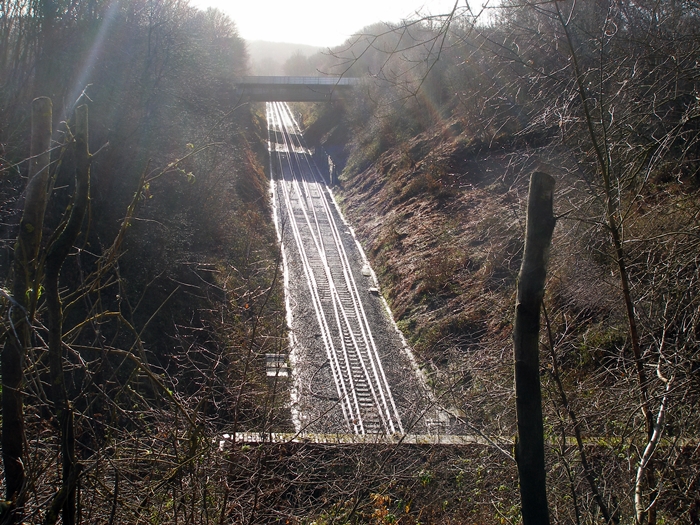 the converging double-track. The original Board of Trade report of 1845 remarks that the tunnel was 420-yards in

length, but recent publications have since knocked ten yards off this figure! David Glasspool