Although modernisation is now beginning to take its toll on this station, it was until recently still very much the quintessential rural halt, complete with classic waiting shelters and a clapboard signal box. By the turn of the 20th Century, all major railway systems in the south – LSWR, LB&SCR, and SE&CR – were suffering from increasing competition of tramways on local, short-distance routes. The LSWR were troubled out west, in Exeter, the LB&SCR in South London, and the SE&CR in North Kent. For the LB&SCR, the solution lied with electrification, starting with the South London Line, which received overhead wires carrying 6,700 volts in 1909. However, for the LSWR and SE&CR, the ‘’railmotor’’ concept was devised, whereby a steam engine and single carriage shared a common chassis, and served a series of new, small stations at regular intervals.

The SE&CR faced a tramway network which extended from Woolwich to Plumstead, Erith, Dartford, and onto Horns Cross (Stone). Thereafter, a one-mile gap existed, after which the tramway system of Gravesend commenced. The original intention was to fill the breach and link these two systems up, forming a continuous tramway between Woolwich and Gravesend. In response to this, two new halts were commissioned by the SE&CR along the North Kent Line: one in-between Dartford and Greenhithe, and a second in-between the latter and Northfleet. These became Stone Crossing Halt and Swanscombe Halt respectively, both coming into use on 2nd November 1908. In the SER’s earliest days, passengers at some ‘’stations’’ had to contend with boarding trains upon a pile of wooden planks – not even the most basic of amenities, such as platforms, were provided. Things had at least improved since then, and both halts were equipped with a pair of platforms situated either side of the double-track. These were economical, being of all-timber construction, and unlike earlier SER practice, were not staggered. At Stone, a level crossing, complete with timber ‘’farm gates’’, existed at the eastern ends of the platforms. Adjacent to this, on the ‘’up’’ side, could be found a delightful signal box, a rather quaint structure of all-timber construction, just one-storey-high. This was of typical SER design, with clapboard panels and sash-style windows. Even into the SE&CR era, a number of new signal boxes were still built to the original SER profile. Indeed, under the Joint Managing Committee, some locations received SER cabins which had been dismantled and transported from elsewhere. On the ‘’down’’ side of the line, opposite the signal box, could be found the crossing keeper’s house. This was a two-storey-high affair with a slated pitched roof, and can be seen in the below photograph.

The railmotor services lasted for ten years, after which the sets were withdrawn and the engine and carriage components separated. The latter eventually became standard locomotive-hauled stock, seeing out their days on Kentish branch lines such as those to Allhallows, Westerham, and Hawkhurst. No doubt passengers were glad to see the back of these peculiar creations, for the seats were reportedly rock hard and the ride extremely bumpy.

A similar railmotor service had commenced between Ashford and Hastings marginally earlier, on 1st July 1907, again to provide a local service to small, isolated communities. A number of timber halts sprung up around the line, built in a similar fashion to that at Stone Crossing. However, unlike their North Kent Line counterpart, they wholly lacked any form of lighting. At Stone, the SE&CR had at least provided gas lamps: one existed either side of the running lines to illuminate the crossing gates, whilst others were attached to the timber fencing which lined the rears of the platforms. 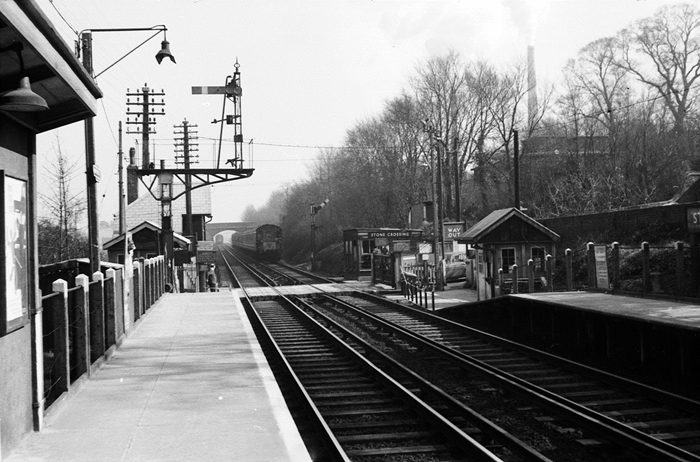 A classic eastward view from the ''down'' platform in 1965 shows a car waiting at the level crossing as an EPB approaches with a Charing Cross service. Note that the ''down'' starter semaphore shares its bracket with a telegraph post. Behind the signal post can be seen the ''down'' side ticket office and, behind that, the crossing keeper's cottage. The latter was demolished about two years after this photograph was taken. In the foreground, on the far left, can just be seen the ''down'' side waiting shelter. In evidence on the right is the ''up'' side ticket booth, of concrete construction, whilst behind can be seen the SE&CR signal box. The chimney in the background is that of the Portland Cement Works. © David Glasspool Collection 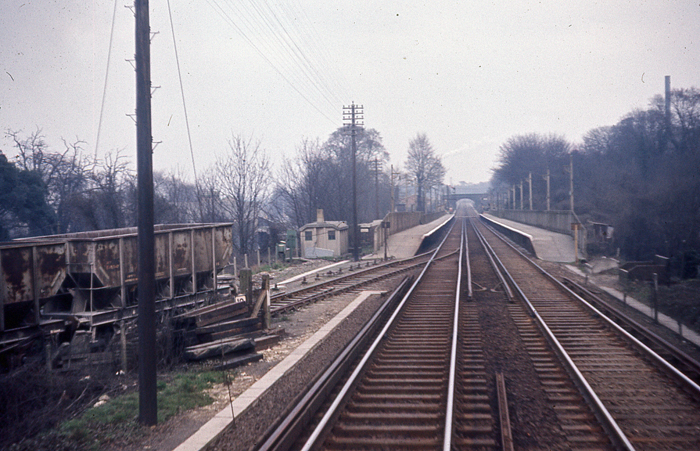 An eastward view has the station's platforms, complete with 1956 concrete extensions and bracket lampposts, straight on. Coming in from the left is the trailing connection between the "down" line and the Kent Portland Cement Works, this of which closed the year after this photograph was taken. © David Glasspool Collection 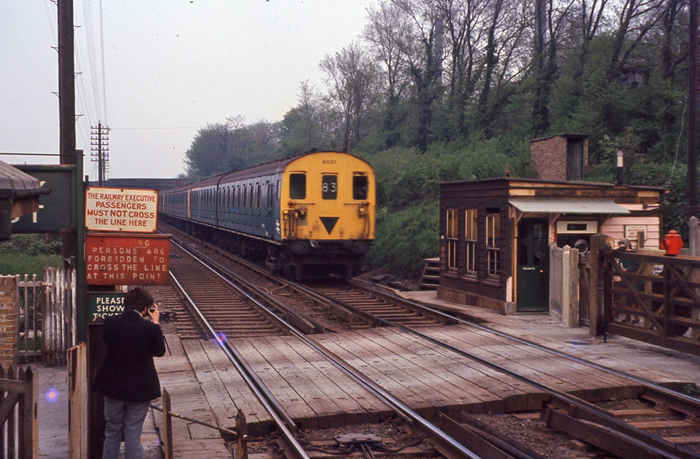 A formation of 2-HAPs, lead by No. 6037, is seen approaching the level crossing with a Cannon Street via Greenwich service. Compared with the previous photograph, the "up" semaphore had gone, the Crossing Keeper's house demolished, and the grimy signal box had lost its traditional green name board. The latter had been relegated to the status of gate box and had the additional role of ticket office, as evidenced by the new canopy and window. © David Glasspool Collection 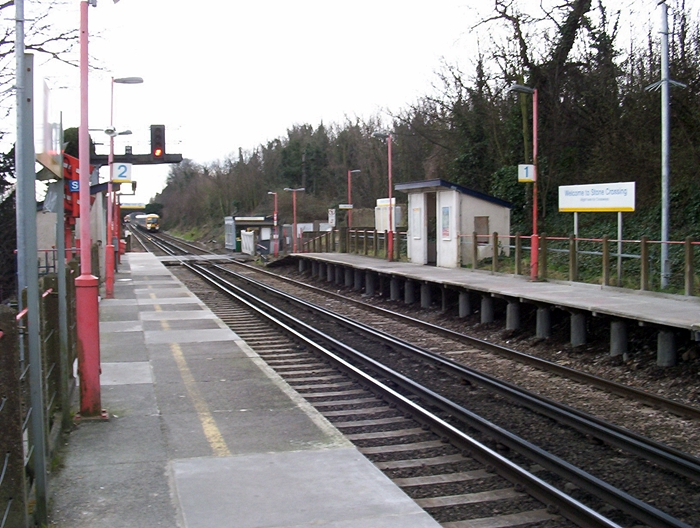 We fast forward to 2003 and witness the SR waiting shelters, signal box, and level crossing. The chimney seen in the first photograph has disappeared from the landscape. By this time, the platforms were showing signs of patch-up strengthening work. © David Glasspool 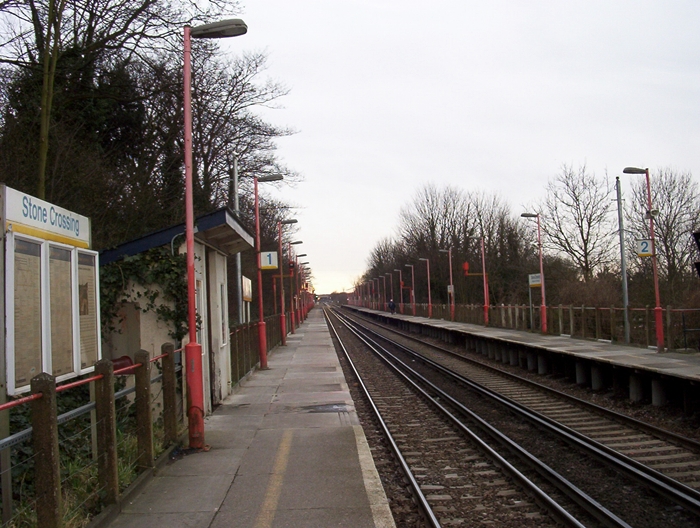 A westward view shows the lengthy platforms and a mixture of colour schemes: the faded red of Network SouthEast and the blue, white, and yellow of Connex South Eastern. At this time, the station had an off-peak service of one train in each direction every thirty minutes. © David Glasspool