Stations along the Tonbridge to Hastings route have stood the test of time rather well. Stonegate is no exception, and despite significant modernisation works at the site as part of the 1986 electrification of the line, the station retains its historic main building, the latter perhaps marred only by a somewhat clinical footbridge. The SER’s first line to Hastings was that from Ashford, a rather roundabout route from London which traversed the bleak Romney Marsh and opened to traffic in its entirety on 13th February 1851. A much shorter line to Hastings, via Tunbridge Wells, had received Royal Assent as early as 1845, and eventually, this came into use in stages:

Stonegate opened with the Tunbridge Wells to Robertsbridge section of the route, being known as ‘’Withernden’’ from the outset. ‘’Withernden’’ was a large manor within the parish of Ticehurst, Sussex, which belonged to the Newington family. The latter were descendents of one Sir Adam Newington, a Knight from the 16th Century, born in 1481. The station quickly became ‘’Ticehurst Road’’, the name coming into use only three months after the line opened to traffic. ‘’Road’’ suffixes indicated that stations were on the peripheral of the areas they purported to serve – in fact, Ticehurst Road was as much as 2⅔-mile from its namesake parish. The station was, nevertheless, typically SER in character, comprising a pair of staggered platforms situated either side of a track foot crossing. As mentioned several times elsewhere on the website, the SER arranged platforms in a manner which ensured passengers using the foot crossing always passed behind a stabled train, to reduce the risk of being struck. The route had added interest because architecture along it was standardised upon two variants, Gothic and Italianite, of which Ticehurst Road was the latter. The main building was situated upon the ‘’down’’ platform and was on a par with those structures which had been produced marginally earlier at those stations along the Ashford to Hastings route. Two-storeys high and red brick throughout, the building was an imposing asymmetrical affair, frescoed at its edges with stone. It came complete with the SER’s trademark sash-style windows and large chimneystacks, both familiar features across the company’s network. The building was the work of architect William Tress, whom was also responsible for the structures on the aforementioned route to Hastings across the Romney Marsh. The ‘’up’’ platform’s waiting accommodation was much more modest in comparison, a quaint timber shelter being in evidence – this was identical in design to that which still exists at Ham Street today. The platforms were backed at their rears by solid timber fencing and gas lamps were of the traditional diamond-shape design.

Goods facilities initially comprised a pair of sidings, on ‘’up’’ and ‘’down’’ sides, laid on the opposite sides of the running lines to the platforms. Both sidings had trailing connections with the main line, and that on the ‘’down’’ side passed through a substantial brick-built goods shed. Whilst ex-LC&DR good sheds have survived in comparatively large numbers (Faversham, Adisham, Shoreham, and Herne Bay to name but a handful), SER variants are a little harder to come by. Thankfully, a notable example still exists at Appledore, and is testament to the design once in use at Ticehurst Road. The aforementioned pair of sidings were later, in about 1880, joined together in a perpendicular fashion, by the laying of a single track upon the same site as the track foot crossing. As a result, the track foot crossing became flanked on both sides by wagon turntables. In the station’s earliest years, signalling was administered by a signalman based in a quaint single-storey clapboard hut at the Hastings end of the ‘’up’’ platform. This would merely have been a base for the signalman, and points would instead have been controlled by immediately adjacent mechanical levers. This situation was greatly improved upon in 1893, which transpired to be a busy year for contractor Saxby & Farmer. The firm was responsible for modernising signalling at many sites along the SER’s Ashford to Hastings, Tunbridge Wells to Hastings, and Canterbury routes. This was a period of intensive railway signalling, where railway companies hired in contractors to cope with the scale of work involved. One of Saxby & Farmer’s attractive – and, now, familiar – signal boxes appeared at the Hastings end of the ‘’up’’ platform, upon the former site of the original signal hut. The design was standardised, featuring a brick base and a timber upper half with gabled roof; examples of this variant can still be found in existence on the Canterbury (SER) route at Wye and Sturry. With reference to the original signal hut at Ticehurst Road, this was not wholly abolished; rather, it was relocated to the ‘’down’’ side and placed end-on to the main building’s London-facing elevation. Here, it remained right through to the British Railways era. As part of the 1893 scheme, a trailing crossover was inserted between the running lines at the northern end of the layout.

Within the first decade of the SE&CR Joint Managing Committee’s existence, a small number of layout changes were made. An additional Hastings-facing siding was laid in the ‘’down’’ side goods yard, and the wagon turntables and perpendicular track were abolished. Finally, a cattle pen and coal staithes were created behind the goods shed. Thereafter, little changed at the site, such being the case at the majority of stations along the route. Even the SE&CR diamond-shaped lampposts avoided being replaced by the Southern Railway’s ‘’Swan Neck’’ variant after 1923, although it does appear that it was during this company’s tenure that the main building acquired an all-over whitewash paint finish. In addition, the timber fencing which backed the rear of the ‘’up’’ platform was abolished. In June 1947, six months before absorption into a then new nationalised ‘’British Railways’’, the station became plain ‘’Stonegate’’.

For long, Stonegate remained as a typical SE&CR affair, from buildings to lampposts. Closure of the goods yard occurred on 6th November 1961, but drastic alterations at the site did not come for another quarter of a century. Modernisation began in 1984, as part of the Tonbridge to Hastings electrification scheme, with the decommissioning of the Saxby & Farmer cabin on 11th May of that year. Control passed to the still extant signal box at Robertsbridge, which was converted from lever to panel operation. During 1985 Stonegate’s track foot crossing, a relic from SER days, was superseded by a 50-foot-wide footbridge of concrete and metal construction. To accommodate both this and longer train formations, ‘’up’’ and ‘’down’’ platforms were extended at their southern and northern ends respectively, partially using breezeblock and prefabricated concrete components. The ‘’up’’ platform became host to a pair of glazed bus shelters, the original timber waiting shelter was abolished, and the main building became the recipient of a new coat of white paint. The full electric timetable along the Tonbridge to Hastings route commenced on 12th May 1986. 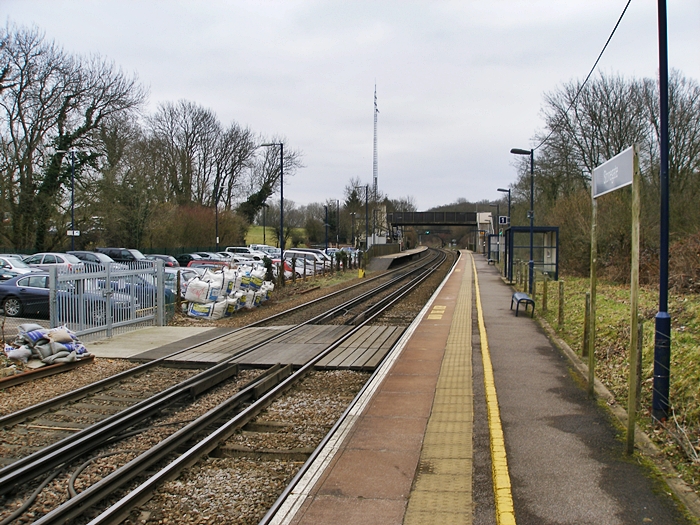 A southward view from the ''up'' platform shows that a barrow crossing has returned in some form, if only for

use in the engineering capacity. On the right are the two waiting shelters added in 1985, whilst in the background

is the somewhat clinical footbridge. As the car park suggests, this station handles a significant commuter traffic. 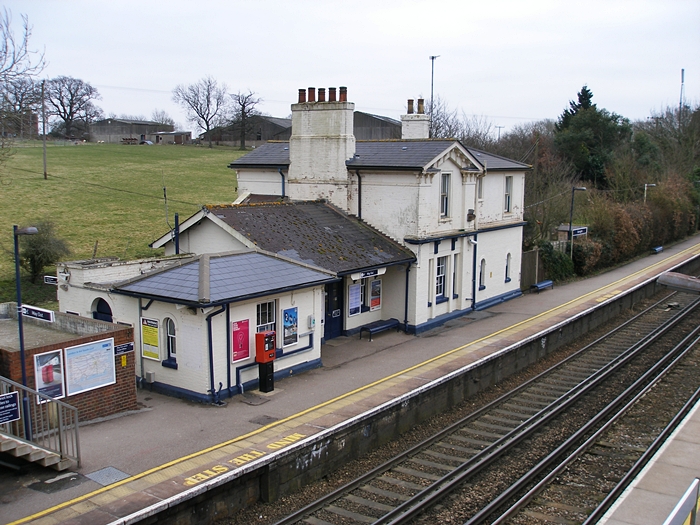 The main building looks somewhat forlorn, the white paint scheme beginning to flake off, but there is evidence

of recent slate tiling. It retains the SER's trademark sash-style windows. The first SER signal box was, in 1893,

re-sited to where the square brick structure on the left is now situated. David Glasspool 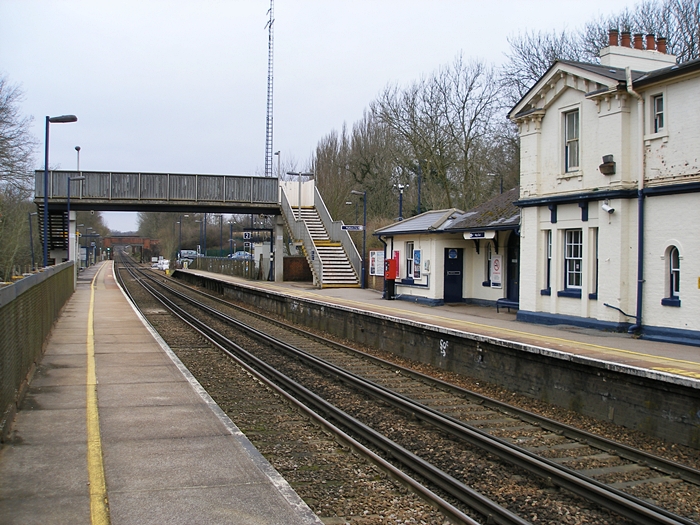 A northward view includes the dreary footbridge and the obvious extensions of both platforms. The station is