Boring of the Chunnel from the British end began on 15th December 1987. In the same year, British Rail started looking at possible routes for the proposed Channel Tunnel Rail Link (CTRL), a new dedicated high-speed line connecting Central London with the Chunnel portal. At this time, Stratford had been outlined as a possible location for an international station – by 1989, however, it was clear that the finalised route of the high-speed line would not even touch East London. A £1000 million public-private partnership scheme devised by British Rail and British conglomerate ‘’Trafalgar House’’ instead detailed a high-speed route entering the capital from the south. A new low-level terminal area at Kings Cross was to serve a line that ran through a tunnel underneath Central London, later to surface in the capital’s south eastern suburbs. Comparatively cheap this project may have seemed, it was also one that would have involved mass destruction of residential and commercial property, stretching from Lewisham through to the Borough of Dartford. In the face of over fifty opposition groups, British Rail started acquiring streets of houses during 1989, under a compulsory purchase scheme. In 1990, the Government confirmed that the CTRL scheme was going ahead, to set the ball rolling on an extensive demolition operation.

Fortunately, before entire neighbourhoods were obliterated, structural engineering firm ''Ove Arup & Partners'' forwarded its own plans to the Government, which instead outlined a far less destructive CTRL entering London from the east. The advantages of this alternative route were clear: it would utilise much derelict land within the East London suburbs and around the Essex border, and would kick-start a programme of regeneration in areas which badly needed it. Between Dagenham and the proposed Kings Cross terminal, the line would be hidden underground – thus, the revised route would be far less environmentally destructive and much more aesthetically pleasing. As a whole, a quarter of Ove Arup & Partners’ CTRL would be within a tunnel. Thankfully, the Government considered the new scheme seriously, and as a result, new plans were published in October 1991 for a revised high-speed line entering London from the east. On the 14th of the same month, the then Secretary of State for Transport, Christopher Chope, announced: ‘’it is envisaged that the high-speed train from the Channel Tunnel to Kings Cross will stop at Stratford.’’

By the end of 1993, the Government’s support for an international station at Stratford was wavering, in spite of the Transport Secretary’s comments two years previously. In January 1994, it was announced that ‘’Union Railways’’ had produced a report detailing forecasts of the patronage at each potential intermediate station site along the route. In addition to Stratford, the candidates were:

·         Ebbsfleet, Kent: This concentrated on a site amongst exhausted quarry workings and redundant landfill pits, on the Dartford and Gravesham border.

·         Nashenden, Kent: This was the location of a farm. It resided to the south of the Medway, on the opposite side of the M2 to Borstal

‘’Union Railways’’, a wholly-owned subsidiary of the British Rail Board, was responsible for the planning and building of the high-speed route. The Stratford International case was being championed by a number of large bodies, including the locality’s Newham Council, Ipswich Borough Council, and Norwich City Council. The latter two had interest in the Stratford scheme on the basis that 70% of the population of East Anglia lived within the catchment area of the Liverpool Street to Stratford route. It was also reported that the entire population of Essex was within this same bracket and the provision of an international station at Stratford would save passengers having to travel into the heart of London to board a continental service, shaving twenty minutes off of their overall journey time. Encouraging East Anglia and Essex residents to make their way to Ebbsfleet by road, via the Dartford Crossing, was seen as undesirable, particularly when Stratford could already offer unrivalled public transport links. Newham Council stressed that no provision of an international station at Stratford would mean no regeneration would occur in East London. There was no opposition to producing a station on the CTRL at Ebbsfleet, but promoters of Stratford suggested that only opening the former, without an East London counterpart, would see all potential economic benefits disappear down the line to Kent. Stratford offered a 200-acre brownfield site on which the international station, in addition to new commercial and residential development, could be built. Supporters of Stratford International further suggested that the Ebbsfleet development could not strictly be considered as ‘’regeneration’’, as opposed to that in East London, for it was to take place upon a greenfield site around exhausted chalk pits. Within a five-mile radius of the proposed Stratford station site, it was claimed that at the time 125,000 people were unemployed, this representing a quarter of all those unemployed within London. Stratford International and redevelopment of the nearby Royal Docks into a commercial centre were seen as key to reducing the area’s jobless rate. The establishment of the station was forecasted to create 4000 new jobs in the area by the millennium, 15,000 by 2015, in addition to 40,000 at a redeveloped Royal Docks. 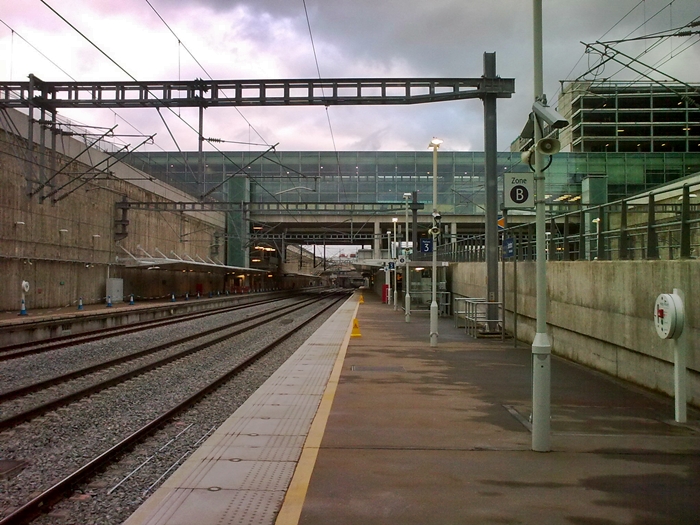 An eastward view from the central island platform reveals the ''down'' tracks, which include a non-stop through line. On the left is the yet to be commissioned ''international'' platform, which is coned off and resides next to a set of rusty rails. This platform is lower in height than the island, and when ''Javelin'' services use it during the 2012 Olympics, temporary decking will be installed upon it to bridge the gap between surface and train. On the right can be seen the single-track spur which ascends to link the CTRL with the Eurostar maintenance depot at Temple Mills. © David Glasspool 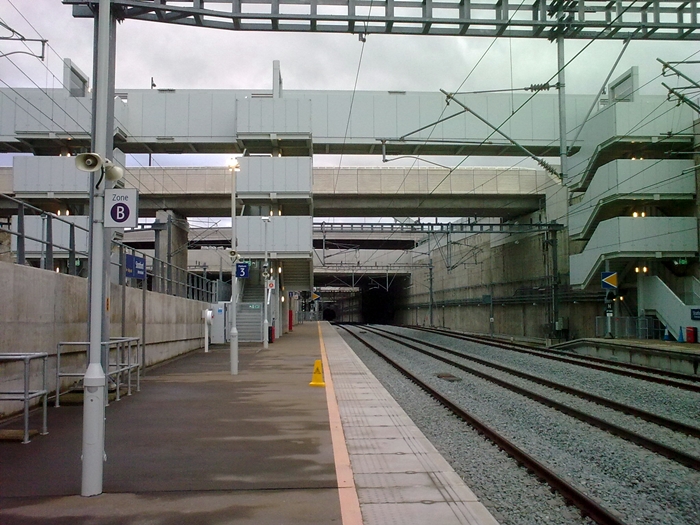 A westward view, again of the ''down'' tracks, shows obvious signs of a gradient, and one of two single bores which takes the line through to the Kings Cross railway lands. The maze of staircases in the foreground - yet to open - have apparently been installed to cope with heavy passenger flows during the Olympic Games. © David Glasspool 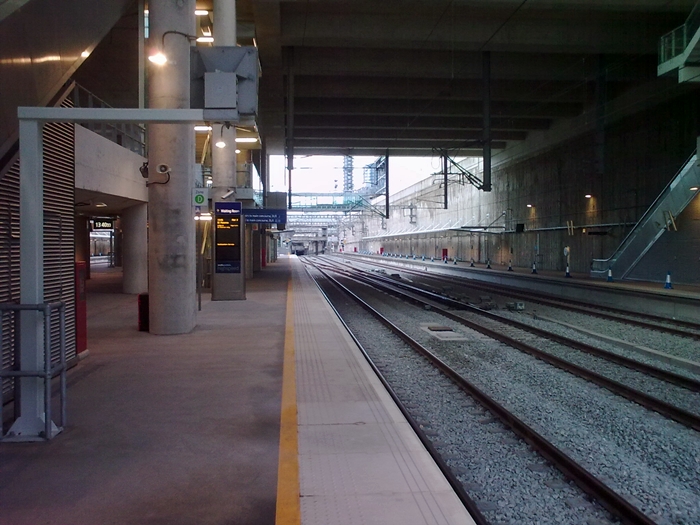 A second eastward view this time looks at the ''up'' lines, and as per the ''down'' side of the station, a triple track formation is in evidence. Again, the ''international'' platform is coned off: it is unlikely that Eurostar services will ever stop here, since North of London international services were killed off. © David Glasspool