This quite charming station came into use with the Bromley (SER) branch on 1st January 1878, being known as ‘’Plaistow’’ from the outset. The station took its name from the parish of Bromley it was located within, and the largest structure in the immediate area at the time was Plaistow Lodge, residing 265 yards east of the railway.

It has been well documented within this website that the SER took a widespread ‘’economical’’ approach to station construction from about 1860, with virtually all structures being fabricated from wood. The Bromley branch was no exception, and the line’s terminus was wholly wooden in construction – the only brick in evidence was that which constituted the chimneystacks, the water tower base, and a small hut. However, Plaistow appears to have been a little luckier, instead receiving more ‘’permanent’’ treatment. Two platform faces were in evidence here from the outset, and the late opening date of the station suggests that the covered lattice footbridge at the northern end of the layout is also an original feature. The main waiting facilities here were positioned on the ‘’up’’ platform; these were single-storey, with a pitched roof, and were crème brick in construction - even toilet facilities were incorporated within these. A one-storey high crème brick wall continued northwards from this structure, up to the footbridge, and supported a copious and intricate canopy on its eastern elevation (excepting the valance, this arrangement can still be viewed today). The ‘’down’’ platform did not feature any dedicated waiting accommodation as such, but like its ‘’up’’ side counterpart, a single-storey high crème brick wall ran along the outside edge of the platform, supporting a canopy of identical design. The fact that the ‘’down’’ side canopy was nearly twice as long as that on the ‘’up’’ side, perhaps compensates for the lack of waiting facilities for Bromley-bound passengers. It was only once a passenger left platform level that he or she would notice the clapboard content. The location of the platforms within a cutting saw a ‘’high-level’’ entrance come into use. This was single-storey, of clapboard construction at 44-foot long, and was positioned on the ‘’down’’ side, immediately north of the footbridge entrance. It was typical of SER design, even incorporating this company’s sash-style windows, these commonly seen on the company’s signal boxes.

The station became ‘’Sundridge Park’’ on 1st July 1894, after the manor house and large grounds just to the north east. No goods facilities have ever been established, such traffic unsurprisingly being dealt with at the end of the line. Furthermore, the simplicity of the layout through Sundridge Park also negated the requirement of a signal box; instead, the SER-designed cabin at the Bromley terminus controlled the branch. The distance between the southern end of Sundridge Park’s platforms and the buffer stops at Bromley was a mere 640 yards. The former station was provided at the request of a local landowner, just like Grove Park had been, which indicates why the effort was taken to establish through platforms so close to the end of the line.

When the branch originally opened, it was very rural in character. Indeed, it has already been noted that the most prominent structure in the vicinity was a lodge. The area gradually developed in the early 20th Century, but what accelerated growth and urbanisation of the surrounds was the Southern Railway’s electrification scheme of the 1920s. On 28th February 1926, the Bromley North (suffix received on 1st July 1899) branch became ‘’live’’, which heralded a faster, more frequent and more reliable service to the capital. It was now possible to live further out from London and, consequently, the land surrounding the stations on this line was redeveloped into roads of high-density housing. The terminus at Bromley North was rebuilt for this occasion, but Sundridge Park remained little changed, apart from witnessing an alteration in platform gas lamp design. The station did not experience any serious modifications to its layout until the British Railways era. In 1954, the platforms were lengthened at their northern ends with prefabricated concrete, to accommodate the ten-car electric formations then being introduced to alleviate overcrowding on suburban services. With the platform extensions also came electric lighting, this supported on concrete bracket lampposts. In about 1970, economies were enacted on the "down" side waiting accommodation. This platform saw its ornate canopy demolished; thereafter, protection from the elements on the "down" platform was provided by a small waiting shelter built to the CLASP style. Finally, in 2003, the sole remaining intricate canopy on the ‘’up’’ side was removed, and a featureless corrugated metal fabrication installed in its place, utilising the original stanchions. A bus shelter also appeared on the ‘’down’’ side around this time, replacing the CLASP structure. 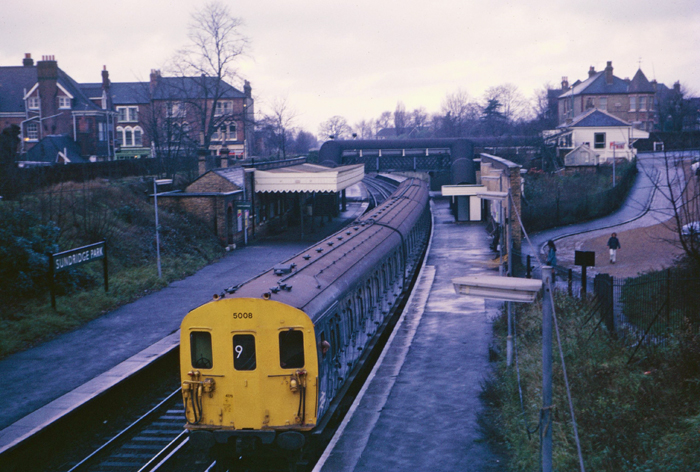 The 11:19 London Bridge to Bromley North service, formed by 4 EPB No. 5008, is seen about to depart. The "down" platform had only recently become shorn of its canopy, this being replaced by the CLASP shelter in front of the footbridge. The "up" platform still retained a sizeable canopy, complete with clover-pattern valance, and substantial offices behind. Note that the main station building, atop the side of the cutting, on the right, had a porch canopy at this time. © Tom Burnham 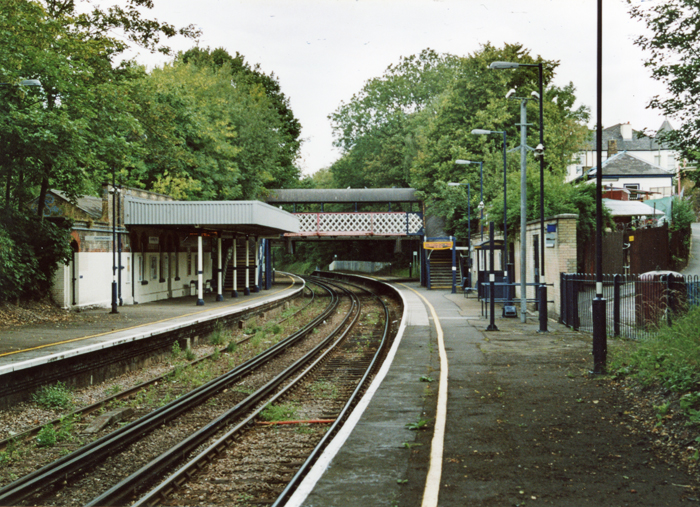 A northward view shows the roofed lattice footbridge, the "up" side crème brick structures adorned with the corrugated metal canopy of 2003 origin, and the top of the hipped-roof station building, to the upper right. The concrete platform extensions can be seen beyond the footbridge. © David Glasspool 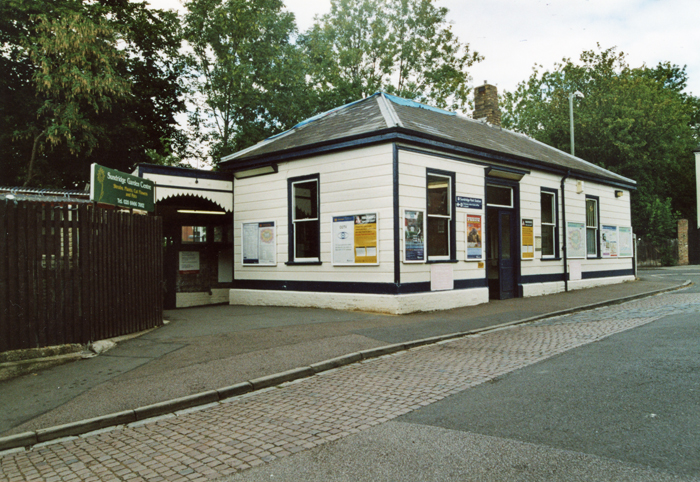 Now minus porch canopy, the station building is seen after a then recent repaint, complete with SER sash-style windows. The arched entrance to the footbridge is to the structure's left, and the original cobbled stones of 1878 are still in evidence in the foreground. © David Glasspool 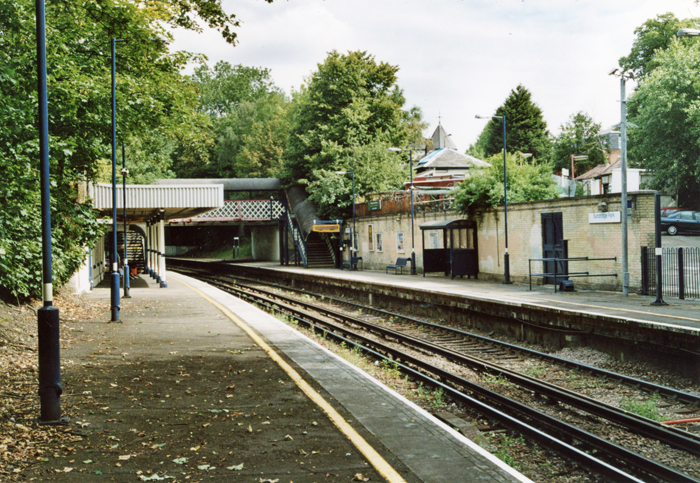 Another northward view shows that the rear supporting wall of the "down" side has been cut down in height since the 1970 photograph. The double wooden doors in-between the name board and bus shelter (this of which replaced the CLASP shelter of about 1970 origin) are authentic features. © David Glasspool