On 9th May 2015, the eighth annual Dartford Steam Fair was held in the town's Central Park. The event's scope goes beyond steam traction to include classic cars, motorbikes, tractors, lorries, and even fire engines. One of the more peculiar visitors to the fair was a former British Leyland double-decker bus which had been heavily rebuilt to include to-scale sections of a London Underground carriage and a Network SouthEast EMU driving vehicle.

A joint promotion of the One Day Travelcard was made by Network SouthEast, one of British Rail's business sectors, and London Transport in 1991. This single ticket was valid within the Greater London area on Network SouthEast services, the London Underground, Docklands Light Railway, and most of the capital's buses. To illustrate this, in January 1991 emerged the aforementioned converted bus, the rear of which had been transformed into the cab of a then recently introduced Class 321 EMU; the centre portion comprised the outline of 1973 Tube stock, whilst the front retained its original guise.

Once the vehicle had ended its career promoting the Travelcard, it entered a period of being in store, after which it was rescued for preservation. Restored by ''London Bus & Truck Ltd'' in Northfleet, Kent, ''SUPERCAR'' now serves to promote the ''Epping Ongar Railway'' in Essex. 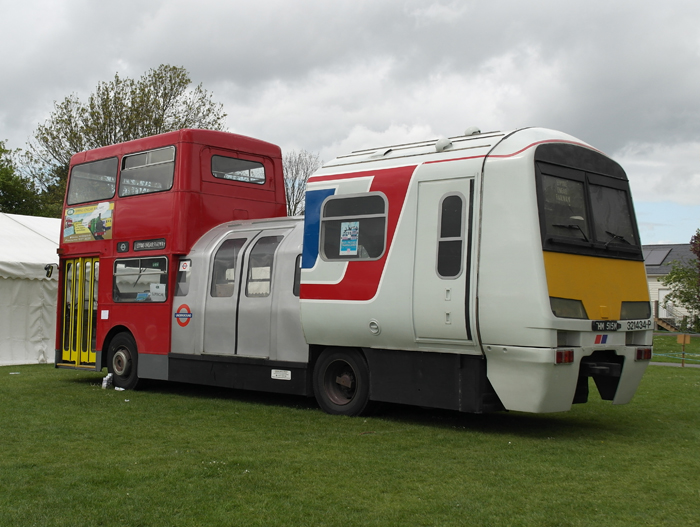 ''SUPERCAR'', as seen in Central Park, Dartford, with faithful replications of a Class 321 driving cab and the middle portion of 1973 London Underground stock. The driving controls remain in the bus portion of the vehicle, brake lights and indicators having been fitted to the EMU cab replica. © David Glasspool