This was one of a trio of wooden-fabricated halt affairs brought into use between Ore and Winchelsea in the early part of the 20th Century. The SE&CR was keen to develop local passenger traffic along the bleak Ashford to Hastings route. First opened on 13th February 1851, the line had quickly become a secondary route to Hastings, after the completion of the much shorter line from Tonbridge to the Sussex Coast via Tunbridge Wells, on 1st February 1852. Unprofitable for many years, the ‘’railmotor’’ age sought to improve passenger receipts across the Romney Marsh, as the SE&CR attempted to devise a cost effective scheme aimed at increasing traffic. Concentration was made almost exclusively on the southern section of the line, between Hastings and Rye, where new stations were planned to serve small populations nearby. The SE&CR was limited in choice of where to locate the proposed ‘’halt’’ affairs, for not only were settlements few and far between, but much of the track bed lacked any form of public access from roads.

On 1st July 1907, a railmotor service commenced between Hastings and Rye, and halts at Three Oaks Bridge (2¾ route miles north of Ore), Guestling (four route miles from Ore), and Snailham (6⅓ route miles from Ore) came into use. The latter was the poorer relation from the outset, for it could only be accessed by means of a dirt track, whilst its counterparts were placed beside already extant roads. The three halts all comprised a pair of timber-built platforms, either side of the double-track, and each surface was host to a diminutive clapboard waiting shelter. Platform lighting was wholly absent, and at night, locomotive crews would locate the halts by means of small lamps placed beyond the ends of the surfaces.

The first wave of changes occurred soon after opening. It became apparent that ‘’Three Oaks Bridge Halt’’ was more conveniently sited for the settlement of Guestling than the ‘’Guestling Halt’’ which purported to serve the community. Consequently, ‘’Three Oaks Bridge Halt’’ became ‘’Three Oaks & Guestling Halt’’, whilst ‘’Guestling Halt’’ became ‘’Doleham Halt’’, the name of the latter taken from a local farm. These alterations had been made by 1910. Eight years later, the railmotor service was wholly withdrawn, and the rolling stock would certainly not be missed by passengers. As recounted elsewhere on the website, a railmotor vehicle comprised a small 0-4-0 tank engine and a fifty-six seat coach, built upon a common chassis. The seats were reportedly rock hard, the ride bumpy, and the passengers seated at the carriage end closest to the locomotive were subject to considerable heat from the boiler’s fire! The railmotor from Hastings had reached a peak of ten services: eight of these terminated at Rye, whilst the remaining two continued onto Appledore. After the cessation of the railmotor, the halts were served by standard locomotive-hauled stock.

Three Oaks & Guestling Halt remained virtually unchanged until the advent of British Railways. In 1954, the timber platforms were replaced by ones of prefabricated concrete construction, manufactured at Exmouth Junction – many halts across the South Eastern Division received similar treatment during the same decade. The original timber waiting shelters were retained, and the platform surfaces were equipped with small, low-level wooden benches. These works coincided with major engineering on the 1042-yard-long Ore Tunnel, the northern portal of which resided 1½-miles south of the halt. This necessitated single line working during 1953 and 1954, between Three Oaks & Guestling and the tunnel, and to facilitate this, a signal box came into use, bearing the name ‘’Three Oaks’’. This was positioned approximately 1¼-miles south of the halt, and was constituted of the same type of brown clapboard timber used in the construction of the former’s waiting shelters. Single storey, it was to be found on the ‘’up’’ side of the line, and its raison d’être was to control additional crossovers between the running lines, inserted to allow either line to be taken out of use for engineering possessions, whilst the other remained operational. Services were required to stop at the cabin to collect the single line working token from the signalman, a procedure which continued until the end of 1954.

The route across the Romney Marsh has always been a lightly used one, ever since its earliest days under the SER. At a time when the British Rail culture was very much one of cost cutting and modernisation, the line became a candidate for closure in 1969. The route was saved by a wave of protesting, but economical measures were enacted ten years later. On 29th April 1979, singling of the Appledore of Ore section of the line began, and a number of stations were destined to become single platform affairs. As part of the works, the ‘’up’’ line and platform at Three Oaks was taken out of use. The timber waiting shelter was demolished, but the concrete platform was left standing, and today this can still be seen in evidence, nature having by now taken a firm hold. Like its surviving counterpart at Doleham, Three Oaks has at last been equipped with electric platform lighting. 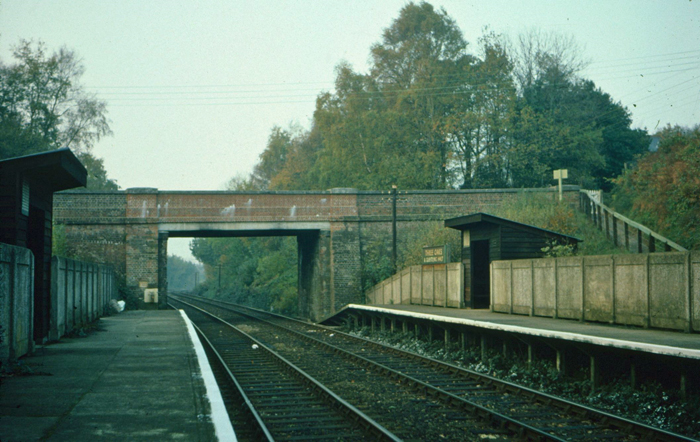 The bridge at the northern end of the platforms was displaying signs of remedial work in this view, which shows the station when it still served a double-track formation. The platform run-in nameboards were still of the traditional type of white letters upon a green background, complete with suffix "& Guestling Halt" © Tom Burnham 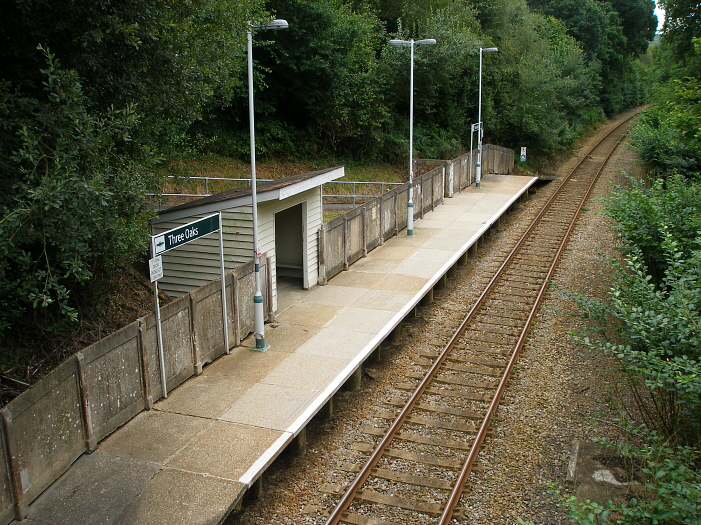 The remaining single platform is similar to that still in use at Doleham, but the prefabricated concrete came to Three Oaks about twenty years later than it did at the former. The sloping entrance path can be seen behind the clapboard waiting shelter. © David Glasspool 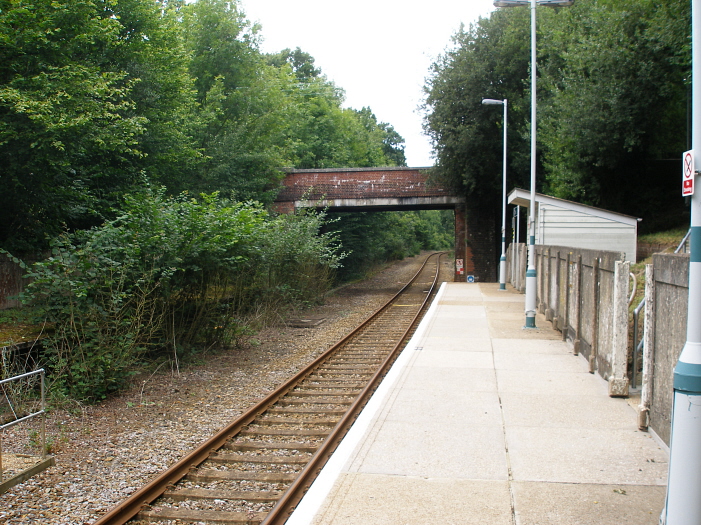 A northward view reveals the road bridge from which the station first took its name (''Three Oaks Bridge Halt''), before this suffix was replaced by ''& Guestling''. The disused ''up'' platform is still in evidence, and can be seen emerging from the vegetation on the left. © David Glasspool 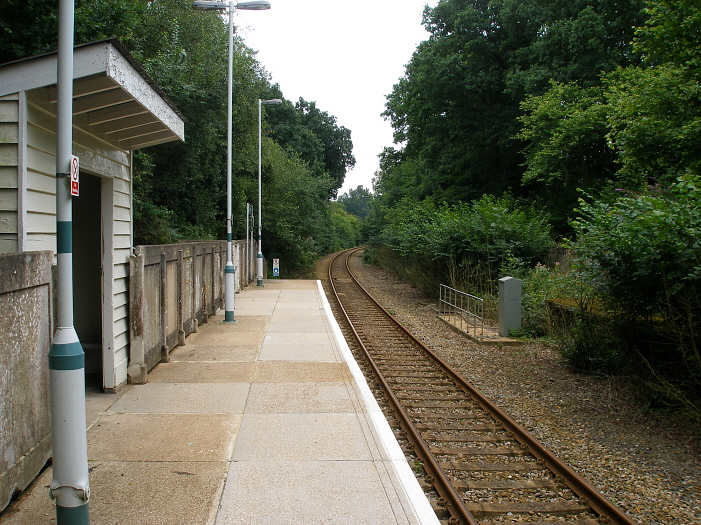 A southward view again shows the disused platform, this time on the right, and the vacant space which once accommodated a second track. The remaining line has been partially slewed onto the bed of the lifted track, as it curves away. © David Glasspool