Hidden behind imposing metal railings and heavy foliage, today the sad state of this tunnel belies its historical importance. ‘’Tyler’s Hill’’, as it was originally called, became Great Britain’s first purpose-built railway tunnel. It was situated upon the ‘’Canterbury & Whitstable’’, the first railway in Southern England to be powered by both stationary and locomotive steam engines. Briefly re-capping the origins of this line, Royal Assent for its construction was granted on 10th June 1825, and a single-track of 5-miles 78-chains was to be laid. George Stephenson was appointed engineer of the line which, naturally, was built to his own gauge of 4-foot 8½-inches; John Dixon became Resident Engineer. The railway was a typical early scheme which relied on tight budgets, thus had to be built on a shoestring. Building work commenced soon after the Act passed successfully through Parliament, but began to stall early in 1827. Consequently, in April of that year, a second Parliamentary Act was passed to permit a further £19,000 of joint capital stock to be raised. In the following October, midway through construction, the diminutive independent concern ran out of money, prompting a third Act to be passed in May 1828. This secured another £21,000 for the project, which finally saw completion in 1830, and the first services – both freight and passenger – ran on 3rd May of that year. Goods and passenger trains each departed every hour, and horses were used in conjunction with steam engines as motive power.

The line was characterised by varying gradients divided among six planes:

The greatest engineering feat was undoubtedly Tyler’s Hill Tunnel, which was 828-yards-long, measured 12-feet-high by 12-feet-wide, and at its deepest point was 65-feet below the surface. Boring through this hill was completed in spring 1827, and 2,400,000 bricks were used in the tunnel’s construction. Within the tunnel, the line rose in the Whitstable direction at a rate of 1 in 100. It was this gradient that prompted the visit of eminent engineer Isambard Kingdom Brunel, in 1835. In that year, Brunel faced criticism for his proposed Box Tunnel, between Cheltenham and Bath, on the Great Western Railway’s London to Bristol line. The engineer had designed the GWR route to near perfection, opting for a double-track line of 7-foot gauge, traversing shallow gradients no more severe than 1 in 1000. The plans for Box Tunnel were formidable: the bore was to extend for 9680-feet and, at its deepest point, be 400-feet below the surface. Through the tunnel, which was to be 39-feet-high by 35-feet-wide, the line would descend at a gradient of 1 in 100 in the Bath direction. At the time, this was considered too steep a descent by the engineer’s contemporaries. Brunel’s critics cited a scenario whereby a brakes failure within the tunnel would send a runaway train careering down the line at an unacceptably high and dangerous speed. Thus, Brunel made his way to Canterbury, where he demonstrated within Tyler’s Hill Tunnel that railway vehicles could be operated safely on such steep inclines. His experiments were conducted using the line’s stationary steam engine at Tyler’s Hill, which employed ropes of 3¼-inch circumference and pulley wheels of 10-inch diameter.

The Canterbury & Whitstable line was laid with lightweight wrought-iron rails, set in chairs with 3-foot bearings. The latter were spiked down to oak sleepers. Within Box Tunnel, Brunel devised an innovative way of dealing with the 1 in 100 gradient which had been the cause of concern for Members of Parliament. Traditional rails were dispensed with, and instead thin plates of iron were laid, their inner edges being supported upon a thick layer of felt. This caused the rails to bend under the weight of passing trains, slowing their progress. 30,000,000 bricks were used in the construction of Box Tunnel, which spanned from September 1846 to June 1841, and over £100 (£6730 at 2008 prices) was incurred driving through each yard of freestone. As an aside, a second Kent connection exists: construction of the majority of Box Tunnel was let to George Burge, a pioneering building contractor from Herne Bay. This involved constructing the 1¼-mile section extending from the western portal; the remaining stretch was completed by local firms.

Throughout its operational life of over 120 years, the diminutive bore of Tyler Hill Tunnel (the apostrophe later being dropped) posed severe restrictions on the type of motive power and rolling stock which could be used on the Whitstable line. Early pre-Grouping passenger carriages survived until the end of scheduled services along the characterful single-track; later builds were simply too tall to pass through the tunnel. From 1st January 1931, the branch became dedicated to freight. Indeed, from the outset the emphasis had always been on conveyance of goods traffic, particularly coal. In later years, the tunnel’s dimensions demanded the regular use of ex-LC&DR ‘’R’’ Class locomotives, first introduced in 1891, which featured cut-down chimneys and narrow cabs. Stationary steam engines at Tyler’s Hill and Clow’s Wood had been abolished during closure of the branch by the SER between 6th February and 6th April 1846. The SER had earlier taken the line out on lease on 29th September 1844, and subsequently re-laid the branch with heavy rail. Although locomotives were used exclusively along the branch thereafter, horses were still employed within the confines of Whitstable Harbour.

Officially, freight traffic ceased to run along the Canterbury & Whitstable line from 1st December 1952. In 1954, track lifting commenced, including that section within Tyler Hill Tunnel. For the next two decades, the tunnel assumed a more peaceful existence, nestled in the rural peripheral of the city; directly above, upon Tyler Hill, significant building works ensued. In 1965, the University of Kent formally opened its doors, and a series of new buildings were erected upon the mound, the latter of which afforded splendid views of the cathedral. Trouble was afoot on 11th July 1974, when one of the university’s then recently completed buildings subsided by 18-inches into the hillside. Suspicions that the disused Tyler Hill Tunnel was the cause were proved correct, and it was found that the bore had partially collapsed. The damaged section of the building was subsequently demolished and replaced by a new extension on an alternate plot; the portals of the below tunnel were bricked up. The country’s first ever railway tunnel, once used as a test bed by renowned engineer Isambard Kingdom Brunel, has since lied in a forlorn state, and today is securely fenced off from its rural surroundings. 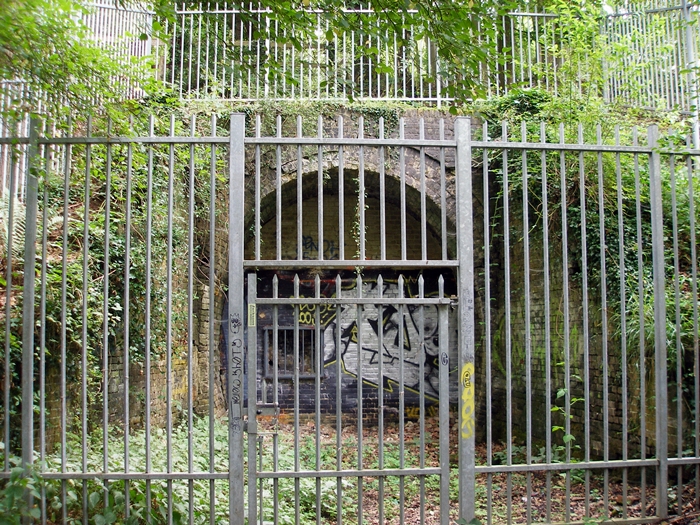 Pictured is the northern portal of Tyler Hill Tunnel, now bricked up, surrounded by metal railings, and heavily

vandalised. A sad end to this important part of railway history. David Glasspool 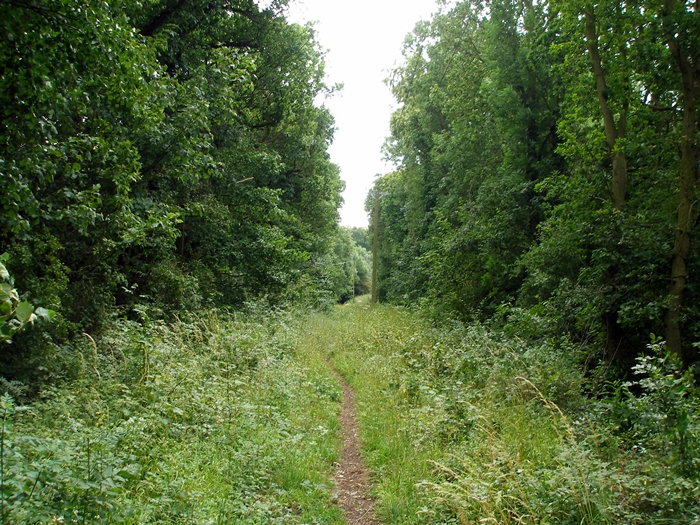 Taken from the same spot as the previous photograph, but now looking in the opposite direction, the course

of the line can still be easily picked out. From this point, 2¾-miles of uninterrupted track bed still exists.
David Glasspool 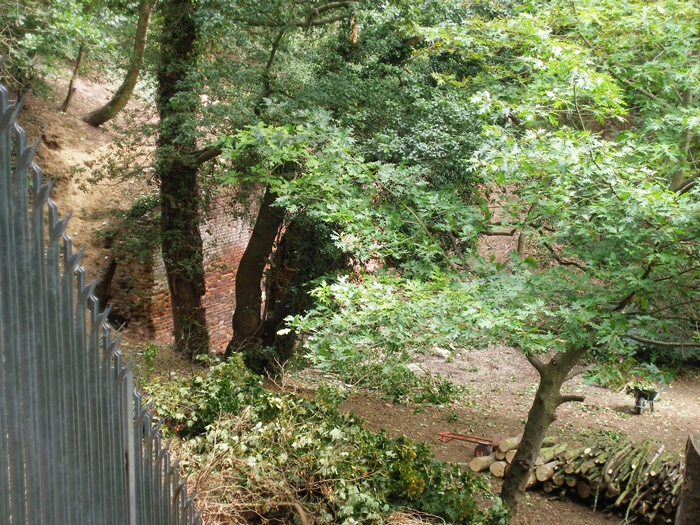 It is not possible to reach the southern tunnel portal, which is located within a small valley surrounded by palisade

fencing. The red brick work and curved bore can be picked out through the trees, and its isolated position appears

to have prevented the levels of vandalism seen on the northern portal. David Glasspool