This was one of five ‘’halt’’ type affairs constructed along the 1882-opened Grain branch by the SE&CR in the early 20th century. ‘’Uralite Halt’’, as it was known from the outset, came into use on 1st July 1906 as a wholly timber affair. Unlike its later North Kent Line cousins which opened at Stone Crossing and Swanscombe in 1908, the halt served a single track, thus comprised no more than a single wooden platform face. Located some 300 yards from the branch’s divergence with the North Kent Line, the halt was amongst bleak surroundings. Indeed, there was no freight marshalling yard at Hoo Junction at this time; this would be a Southern Railway creation. The platform was naturally an economical breed, for it comprised no form of protection from the elements, and would struggle to accommodate a two-carriage formation. The halt’s raison d’être was primarily to serve the adjacent complex of British Uralite PLC, which had been formed in 1899. The company produced drainage pipes, these of which were manufactured from wet asbestos paste. After moulding the asbestos, the pipes would be solidified by cooking in an oven. This company had a single-track Gravesend-facing connection with the Grain branch from the outset.

The halt was served by the Gravesend Central to Grain shuttle service (not every train stopped) which, from May 1932 onwards, also called at Allhallows-on-Sea. It was the opening of the spur to the latter which also coincided with the rebuilding of all wooden halts along the route, including that at Uralite. By this time, the SR was making use of the ex-LSWR Exmouth Junction concrete works to manufacture standardised components for the whole of the Southern network. Consequently, the timber platform was dispensed with and replaced by a much more sturdy concrete fabrication. To the delight of passengers, the new structure boasted a square concrete waiting shelter, complete with glazing.

Shortly after the formation of British Railways, the line across the Hoo Peninsula began to thrive on freight traffic. At Grain, the Anglo-Iranian Oil Company had established a huge refining complex, which processed its first crude oil in 1953. This provided the railway with regular oil flows, but the passenger traffic situation was quite different. The latter had been in decline since as far back as the closure of the original Port Victoria pier, in 1916, and the opening of the Allhallows-on-Sea branch had done little to spark a revival. The push-pull shuttle service from Gravesend Central across the Hoo Peninsula, invariably powered by an ex-SE&CR ‘’H’’ Class tank engine, was perpetuated until Sunday 3rd December 1961. After this final day of running, all halts and stations along the branch to Grain closed, and the Allhallows-on-Sea spur was also taken off the passenger timetable. Denton Halt, a two-platform concrete affair positioned on the North Kent Line in-between Gravesend and Hoo Junction, was also decommissioned. Interestingly, it was the only station on this electrified route never to be served by an electric train, but rather the steam-powered push-pull operation. As far as halts were concerned, only two were left, one of which itself was derelict: Milton Range Halt and the 1956-opened Hoo Junction Staff Halt. 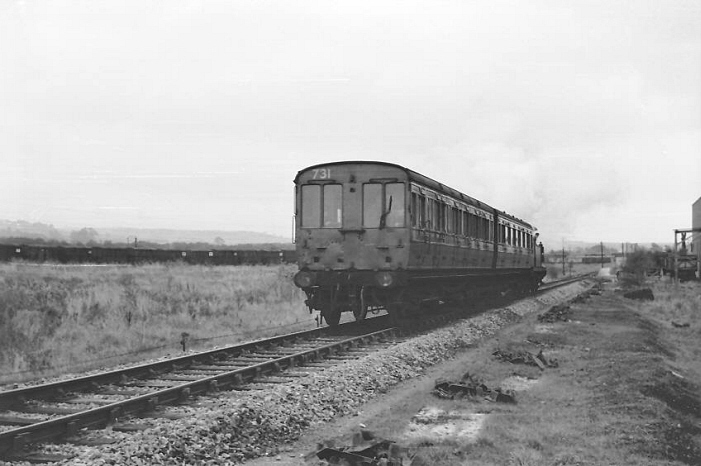 The prefabricated concrete platform of Uralite Halt can just be seen in the background of this 1955 view, which depicts a once quintessential push-pull set being propelled towards Allhallows-on-Sea by an SE&CR ''H'' Class Tank Engine. The driver can just be seen behind the front window pane on the far right, whilst the fireman is more conspicuous, leaning out of the engine's cab. On the extreme right is the British Uralite Factory, which boasted a single-track London-facing connection with the branch, whilst on the left can be seen wagons stabled in Hoo Junction yard. © David Glasspool Collection