This was an eventful ‘’Cathedrals Express’’ rail tour which, although not going according to plan, was nevertheless packed with interest. The day began early at London Victoria on Saturday 4th June 2005, when Fragonset-liveried Class 31 No. 31128 trundled into platform 2 hauling the Mid-Hants Railway’s colloquially named ‘’Green Train’’. The latter was a rake of green-coloured BR Mk 2a carriages frequently rostered for main line charter work. Ex-GWR ‘’King’’ Class No. 6024 ‘’King Edward I’’ was booked to haul the train to Weymouth, and this engine duly arrived from Old Oak Common. 08:27 was the scheduled departure time, for an arrival at Weymouth at 13:43. The train left Victoria on time, with the Class 31 pushing at the rear. It was intended that the diesel would assist the ‘’King’’ up the steeply-graded Grosvenor Bank, and then run light engine to Yeovil via Salisbury. At Yeovil Pen Mill, No. 6024 and support coach would be detached and run to Yeovil Junction, where the engine would be re-filled with water and coal, and rotated on the turntable. Between Pen Mill and Weymouth, the train would be diesel-hauled. The ‘’King’’ would trundle down to Weymouth with its support coach later on in the day, in time for the return working to London. At Willesden Junction, the ‘’King’’ would again be detached, run light engine to Old Oak Common, and the train diesel-hauled into Victoria.

After twenty minutes, the train arrived at Kensington Olympia for an early water stop. With the best part of fifteen minutes to spare, your author alighted and crossed the station footbridge to take some photographs of the train. To my surprise, the diesel was still on the back of the formation, and it later transpired that a crewing problem had prevented the light engine movement via Salisbury. Leaving Kensington Olympia, still on time and with diesel on rear, the train embarked on the maze of lines in West London, affording a splendid panorama of North Pole Depot and the Old Oak Common approaches. We snaked through the environs of Willesden and onto Acton Wells Junction, where the train would descend an embankment to join the Great Western Main Line. A brief pause on the elevated connection was required as the train awaited a path, during which time a ‘’down’’ InterCity 125 screamed past at full cry. Now on the main line, the train passed the former engine shed at Southall, which remains in use as a store for preserved rolling stock. Our next stop was Reading, where another group of passengers would join the train. Beers and spirits had already been cracked open by a number of passengers on departure from Victoria. Much to many passengers’ amusement, one chap called ahead on his mobile phone to a friend waiting to board at Reading, asking him to bring more bottles of whisky on the train! Early signs of trouble began to surface during the Reading stop, this of which was longer than expected due to problems with releasing the train brakes. On departure for the Berks & Hants route, the train was ten minutes behind schedule.

A water stop at Newbury Racecourse was scheduled, but the earlier delays at Reading made this much longer than anticipated, due to missing the original train path. Whilst stabled in the loop here, Class 166 No. 166211 sailed by on the ‘’down’’ line, and an InterCity 125 set screamed past in the ‘’up’’ direction. Our train was eventually given the green light at nearly ¾-hour behind schedule. On the plus side, some continuous running was expected on the next leg of the journey, where the train would use the Westbury Cut-Off to reach its third water stop at Frome. However, there was yet more bad news: it was reported over the public address system that the Class 31 at the rear had failed and, as a result, the train was being diverted to Westbury. Here, spare parts could be sourced from another Class 31 stabled in the yard. On arrival at Westbury, a trio of diesels were witnessed in the yard, Nos. 31454, 31459, and 31601, in the company of five BR Mk 2 carriages in pink livery. We were at Westbury for about 25 minutes before finally departing for Frome.

A splendidly-restored trainshed presented itself at Frome, which once covered a double-track formation. The line here now being single, a disused ‘’down’’ platform face was in evidence, in addition to a collection of overgrown sidings which were gated off from the running line. The Frome water stop took thirty minutes, after which we departed for Yeovil Pen Mill. Due to the severe delays, the train was running nearly 1½-hours behind schedule. It was therefore announced over the public address system that the ‘’King’’ would take the train all the way to Weymouth, rather than coming off at Pen Mill, and later run light engine back to Yeovil. As our train took the curve into Yeovil Pen Mill, we were greeted by a splendid array of semaphore signals, in addition to crowds on the platforms and the road bridge. We embarked on the single track from Pen Mill after a very brief stop, and were able to observe the still extant single-track spur to Yeovil Junction, over which remained a semaphore signal gantry, complete with an ex-LSWR signal box behind. On this leg of the journey, the ‘’King’’ began struggling up the inclines, for the 107-tonne diesel attached at the rear was a complete deadweight. The latter eventually cut-in, shortly before the steam engine stalled, and began pushing the train.

Along the single-track, the prefabricated concrete halts of Thornford and Chetnole were passed, where some very surprised waiting passengers could be seen! A brief stop was made on the approach to Maiden Newton, which afforded some time to observe the still extant track bed of the former Bridport branch curving in from the right. Another stop, again brief, was made in the station at Dorchester West, but eventually we embarked on the home run stretch to Weymouth. On the approaches to the terminus could be seen the ‘’Jubilee Sidings’’, where our excursion stock would be stabled for the afternoon, and the rusty rails of the departing Weymouth Quay branch. Where extensive stabling sidings once existed was now a retail trading estate. The ‘’King’’ arrived at the buffer stops of platform 1 at 15:18, no less than 1-hour 35-mintues behind schedule. ‘’Wessex Electric’’ No. 2409 soon arrived at platform 2 from Waterloo.

Before leaving for the town, we were informed that the return working was likely to be 17:45, but this soon changed to 17:33 due to the lack of available paths. InterCity-liveried Class 31 No. 31454, which we had earlier seen in the yard at Westbury, was brought down to take the ‘’King’’ back to Yeovil – the latter required assistance due to running low on coal. More problems were encountered on the station throat, after the steam engine and diesel were coupled. The pair stalled allegedly as a result of conflicting Train Protection Warning System alerts: one TPWS system was displaying ‘’clear’’, but the other ‘’danger’’.

Indeed, the town still holds much railway interest (but for how long?) in the form of the single-track Quay branch, which snakes its way alongside the harbour edge to a single-platform terminus. The station, Weymouth Quay, has not seen regular scheduled trains since 26th September 1987. By 2005, the prospect of stopping a charter at the site had been diminished, since fencing had been erected alongside the platform face. Nevertheless, all track work appeared to be in a fully complete state when viewed on this occasion, and strictly speaking, it remained part of the National Rail network, albeit under a ‘’Temporary Closure Notice’’.

After returning to Weymouth station for the specified departure, passengers were greeted by the absence of the charter train – the excursion stock was still in the ‘’Jubilee Sidings’’. As ‘’Wessex Electric’’ No. 2403 stood quietly in platform 2, we were informed that the ‘’King’’ and diesel had not even reached Yeovil on their outward trip, due to delays caused by the aforementioned coupling issues between the pair. The prospect of steam haulage on any part of the return leg was by now in tatters, and a complete change of plan ensued. The train would now be diesel-hauled by two Class 31s, Nos. 31454 and 31128, to Reading, by means of the Southern route via Basingstoke (as it later transpired, the train went as far as Guildford). Thereafter, passengers were required to transfer onto National Rail services to complete the journey back to London. An alternative, for those passengers who had not left personal belongings on the train, was to transfer onto the ‘’Wessex Electric’’ at platform 2, which was forming an 18:00 departure to Waterloo. This service could be used at no extra cost, and many passengers, including the author, opted for this train. The South West Trains service made an unscheduled stop at Basingstoke for the benefit of excursion passengers, and brought us into Waterloo at 20:50. This marked the end of an eventful, but nevertheless enjoyable, day. The ‘’King’’ and support coach eventually arrived back at Old Oak Common circa 22:30, having run from Yeovil by the Berks & Hants line. 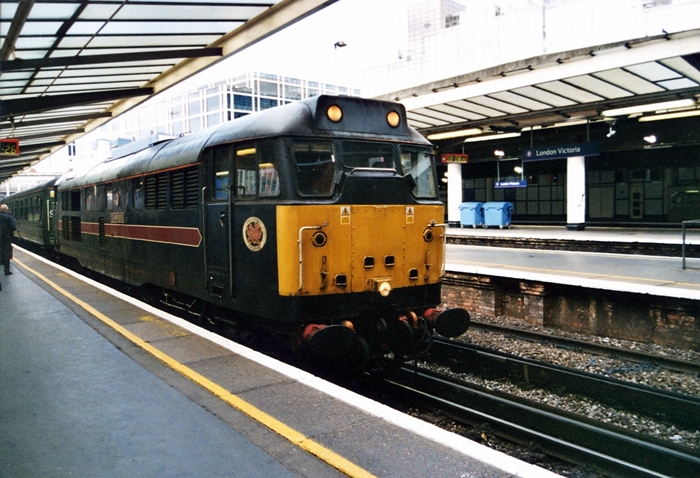 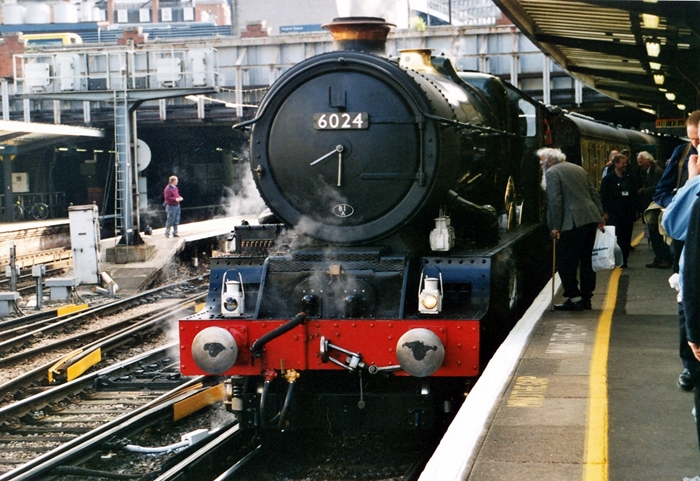 point in the day, it was expected to have steam-haulage to Yeovil Pen Mill, where a diesel would take over for 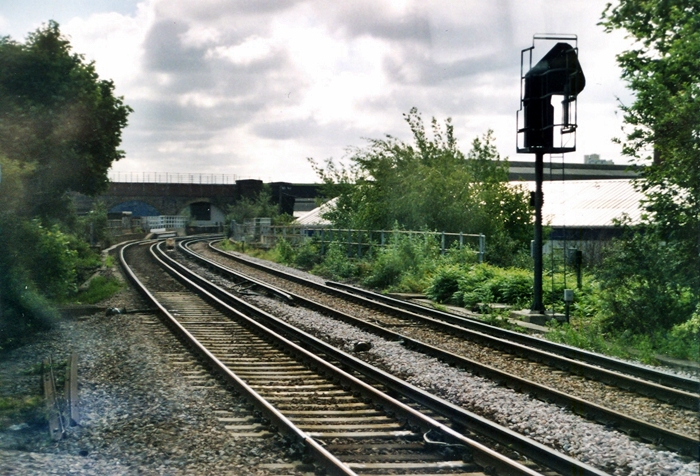 Now on our way, we snake through the environs of Stewarts Lane to reach the West London Line. The viaduct

in the background carries the South London Line over the former engine shed approach roads of Stewarts Lane.

The double track in the foreground is that from Wandsworth Road. David Glasspool