This part of the website aims to cover those carriages operated as part of the VSOE British Pullman fleet, from Stewarts Lane. Battersea has for long been associated with the Pullman car. In 1911, the SE&CR vacated the ex-LC&DR Longhedge Railway Works here – under the Joint Managing Committee of 1899, the decision was taken to move all rolling stock overhaul and repair tasks down to the much larger ex-SER complex at Ashford. Subsequently, in 1912, the Pullman Car Company moved into the redundant Longhedge Works, establishing carriage workshops. These were later moved out of the capital, when an ex-LB&SCR engine shed at Preston Park, Brighton, became available; this was formally commissioned by the Pullman Car Co. on 5th November 1928. Nevertheless, a commissary depot owned by the Pullman Car Co. was retained at Battersea, which supplied food, drink, and laundry to all Pullman services departing London (and not just those of the Southern Railway). On 5th July 1931, the ‘’Bournemouth Belle’’ all-Pullman train was inaugurated, and despite being a Western Section service, the stock was stabled at Battersea (known as ''Stewarts Lane'' from 1934 onwards), placing the carriages in close proximity to the Pullman stores there. The stock of the famous ‘’Golden Arrow’’ was, too, kept at Battersea, although changes to these arrangements were later made under the Southern Region. From February 1960 onwards, the ‘’Bournemouth Belle’’ Pullmans were stored at Clapham Junction Yard, and supplies for the service, from Stewarts Lane, were transported between the sites by van. ‘’Golden Arrow’’ stock was eventually moved over to Clapham Junction in July 1967, at the end of Western Section steam, by which time the service had been in the hands of electric haulage for six years.

The Kent Coast Electrification was the cause of significant decline at Stewarts Lane, the single major loss being the engine shed. Since then, however, there has been a renaissance at the site in terms of carriage facilities. Stewarts Lane has been serving the revitalised VSOE British Pullman fleet since the train was officially launched at Victoria station in November 1981, and within the carriage shed exists many more out-of-service Pullman vehicles, which await restoration, and are yet to be covered by this section. 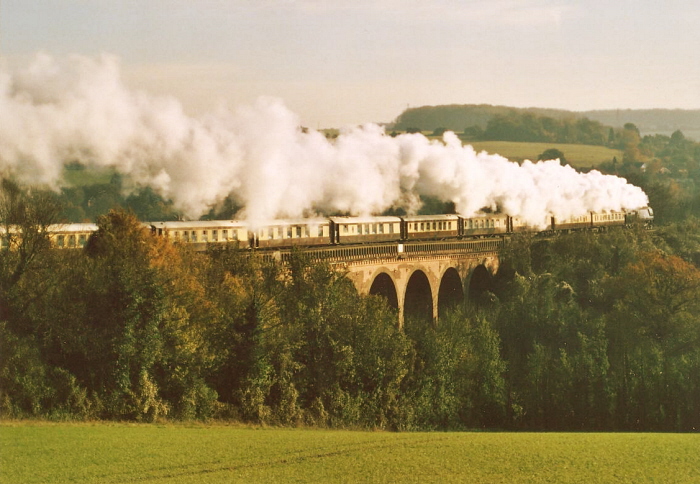 This view depicting the Orient Express flying over Eynsford Viaduct illustrates what preservation is all about. This is the 11:45 working from London Victoria to Folkestone West, with a scheduled arrival time at the latter of 15:15. At the helm is Un-rebuilt Battle of Britain Class No. 34067 ''Tangmere'', complete with support coach in the form of a BR Mk 2a. © David Glasspool