Over time, the stations along the Hastings line via Tunbridge Wells have fared comparatively well. Bar the rather savage 1984 degrading of the latterly-opened Crowhurst, where most platform structures were demolished, of those stations which opened with the route, all retain their main buildings. At Frant, Etchingham, and Battle stations, a very attractive Gothic approach was taken for the architecture, decidedly uncharacteristic of the South Eastern Railway. However, the company employed its more familiar Italianate style, synonymous with William Tress, at Wadhurst, Stonegate (formerly Ticehurst Road), and Robertsbridge stations, providing an interesting contrast along the line.

Wadhurst station opened on 1st September 1851, when the Tunbridge Wells to Robertsbridge section of the line was commissioned for public traffic. A pair of staggered platforms, linked by a track foot crossing, were brought into use at this rural site. The "down" platform was host to the main building, an impressive symmetrical red brick structure, which was two-storeys high and, as previously mentioned, built to the Italianate style. As per the other intermediate stations which opened with the line, perhaps with the exception of Tunbridge Wells, no platform canopies were in evidence at Wadhurst from the outset. "Down" side passengers could have taken cover in the booking hall, whilst those on the "up" platform had a waiting shelter at their disposal. With reference to the latter, this was originally a tongue-and-groove wooden structure and not the brick-built shelter found at the station today.

The track layout evolved over time and is illustrated at its peak in the below diagram. In the earliest years, the foot crossing between platforms shared its site with a standard gauge track which linked two wagon turntables on opposing sides of the running lines; in turn, these each fed a lengthy siding. On the "down" side, 100-yards south east of the main building, was a goods shed fabricated from the same red brick type as the former, and through this passed a single track. Coal was an important traffic here, as was the case at so many stations, and north of the goods shed was a single siding which served a line of staithes used to store this resource.

The early signalling at the station was upgraded in 1893, for which the SER used the services of contractor "Dutton & Co". This company erected an all-timber cabin at the London end of the "down" platform, with gabled slated roof, in front of a wooden hut which was the station's earliest accommodation for the signalman. For the replacement cabin, an incision was made to the platform face, to provide passage for the rods linking the lever frame with the points and signals. Except for here and at Battle, the SER having erected one of its own cabin designs at the latter, the station layouts south of Tunbridge Wells were provided with signal boxes built by contractor Saxby & Farmer.

Wadhurst's track layout at its peak. Click the above for a larger version. © David Glasspool 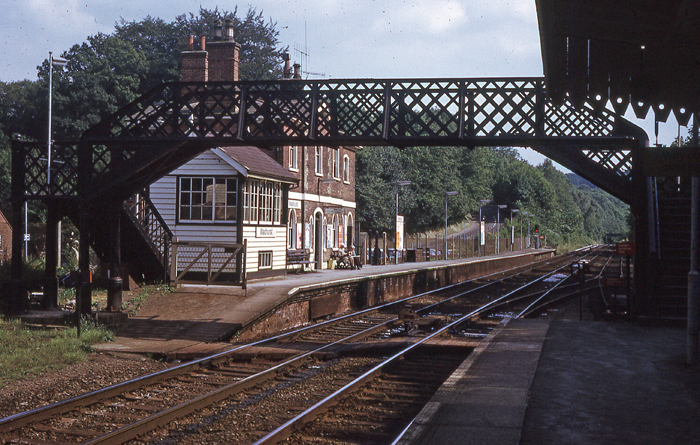 A Hastings-bound view from the "up" platform shows the station building of 1851, the Dutton & Co. signal box of 1893, and the lattice footbridge of about 1898. A timber-planked barrow crossing still existed between the platforms at this time. © David Glasspool Collection 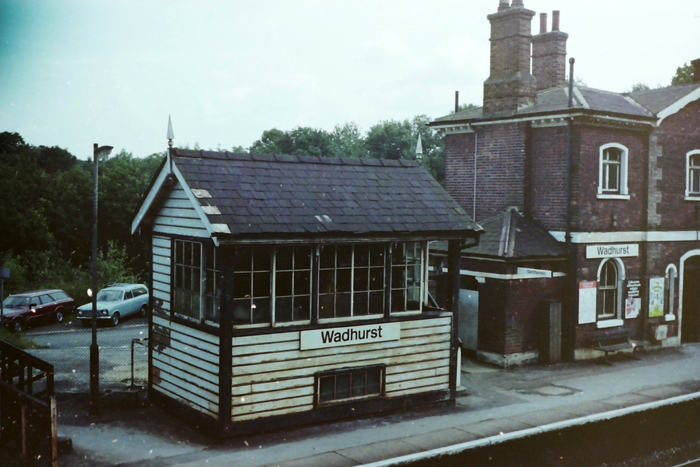 Looking tired, but soldiering on. The Dutton & Co. cabin was taken out of use in April 1986 as part of the Hastings line electrification. Subsequently, it was dismantled and removed to the Kent & East Sussex Railway for re-use at Northiam. Here, it was deemed that much of the existing timber was beyond economical repair; the lever frame and a proportion of the original supporting timbers were incorporated within a new-build signal box which sat upon a brick base, rather than at platform level. © Kevin McArdell 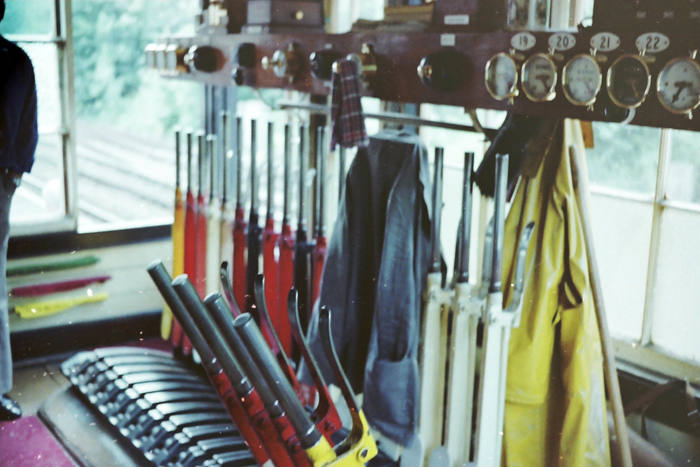