Today, this is a rather unloved two-platform station, serving exclusively South London Line trains running between Victoria and London Bridge. Once, however, it boasted five platform faces, catering for the traffic of two separate railway companies. The station’s origins lie with the LC&DR, which commissioned a cut-off line between Stewarts Lane and Beckenham, via Herne Hill. Its raison d’ȇtre was to provide the company with an independent line which avoided the tolls imposed by the LB&SCR on the existing route to Victoria via Crystal Palace. The line was opened in two stages, first between Stewarts Lane and Herne Hill on 25th August 1862, and then between the latter and Beckenham on 1st July 1863. Wandsworth Road station came into use upon the first section of the line on 1st March 1863, situated around what were initially two tracks forming the ‘’Chatham’’ approaches to London Victoria. Not long after opening, however, and with the impending development of the South London Line, the LC&DR completed a new ‘’high-level’’ line to Victoria, which involved laying an additional three tracks on a completely new viaduct between Grosvenor Bridge and Wandsworth Road. Between the latter and Brixton, a five-track layout existed on a widened embankment, and new platforms were brought into use at Wandsworth Road around the new lines. The LB&SCR’s double-track South London Line opened throughout on 1st May 1867, completing a circuit route between Victoria and London Bridge. The route left the existing Victoria to Clapham Junction line just south of Grosvenor Bridge. From there, it was carried for ¾-mile upon a new viaduct, which was 24-foot 8-inches wide between parapets and averaged 30-feet in height. This then joined the original double-track ‘’low-level’’ LC&DR line to Herne Hill about 100-yards north of Wandsworth Road station.

Since the opening of the South London Line, LC&DR services exclusively used the more recent triple-track arrangement. Of these lines, one was the ‘’down’’ main, one the ‘’up’’ main, and the third the ‘’up’’ Metropolitan. Similarly, the original double-track west of these lines became dedicated to South London Line trains, but remained in LC&DR ownership. Three platform faces were available to ‘’Chatham’’ traffic, two of which formed an island platform sandwiched in-between ‘’up’’ Metropolitan and ‘’up’’ main lines. A brick-built ticket hall existed below the running lines at street level, on the eastern side of the railway, by the corner of Wandsworth Road. This was of yellow brick construction throughout, with arched orange window frames, and essentially utilised the same set of materials and architectural features as Penge station, just down the line. Early maps show that the LC&DR platforms were covered at their extreme northern ends by an overall roof (as was common at the time). On the ‘’down’’ platform, along the embankment’s northern fringes, could be found the Station Master’s house, a two-storey-high yellow-brick structure with a hipped slated roof. This was built to the same design as the main building at the company’s Canterbury station, and survived long after the closure of the ‘’Chatham’’ platforms. Maps from 1882 still show the overall roof at the far northern ends of the LC&DR platforms, but by 1895 this had disappeared and more conventional canopies installed (as indicated on the enclosed map).

As mentioned earlier, the LB&SCR station served the double-track which had originally formed the LC&DR’s approaches to Victoria from Herne Hill, but had since been turned over to ‘’Brighton’’ traffic. The two brick-built platforms commanded their own Station Master’s house, built on the Victoria-bound side of the South London Line tracks. This was a substantial yellow brick structure, two-storeys in height with a slated pitched roof, located at the southern end of the site. The Station Master was treated to a large garden in what was then deep in rural territory – the urban sprawl of Central London had yet to take over, and the landscape constituted flowing fields and a sea of trees. The two LB&SCR platforms were linked at their western ends by a subway, and each surface was host to an economical clapboard waiting shelter. This station was separated from the LC&DR site by the latter’s ‘’up’’ Metropolitan line.

200-yards north of the station could be found ‘’Factory Junction’’, where the South London and ‘’low-level’’ LC&DR lines split, and also where the latter and a double-track spur to Clapham Junction diverged. The junction was controlled by two signal boxes, one situated within the fork of the diverging Clapham Junction and Victoria lines, and another situated on the western side of the South London Line, 50-yards north of Wandsworth Road station. During the 1880s, a third signal box came into use, this time at the southern end of the station, sandwiched in-between the ‘’down’’ track of the South London Line and the ‘’up’’ Metropolitan line of the LC&DR route. This cabin is marked on the enclosed map, and replaced the aforementioned signal box located at the opposite end of the station, on the ‘’up’’ side. It, too, had gone by 1920.

In 1891, the South London Line recorded that six million passengers had used the route, an impressive total for what was one of the capital’s busiest suburban lines. In the early 20th Century, however, the proliferation of trams reversed this trend and passenger numbers steadily fell. In response to this, the LB&SCR received Royal Assent for the electrification of its entire network in 1903. The South London Line was the first recipient of a new system of overhead wires, supported upon lattice gantries and carrying an alternating current of 6,700 Volts. Public electric trains commenced between London Bridge and Victoria on 1st December 1909, steam being retained solely for those services running early on weekdays, between the hours of 4:30 AM and 7:30 AM. Naturally, gantries were installed along the LB&SCR platforms at Wandsworth Road, but those tracks of the SE&CR remained without such treatment.

Ordnance Survey of Wandsworth Road from 1913, a time when both SE&CR and LB&SCR platforms were in use. At the southern end of the station can be seen the long lattice footbridge, linking all platform surfaces. The Station Master's house of the LB&SCR station is marked by the shaded rectangle sandwiched in-between the station and the rear of ''Brayburne Avenue''. Click the above for a larger version. 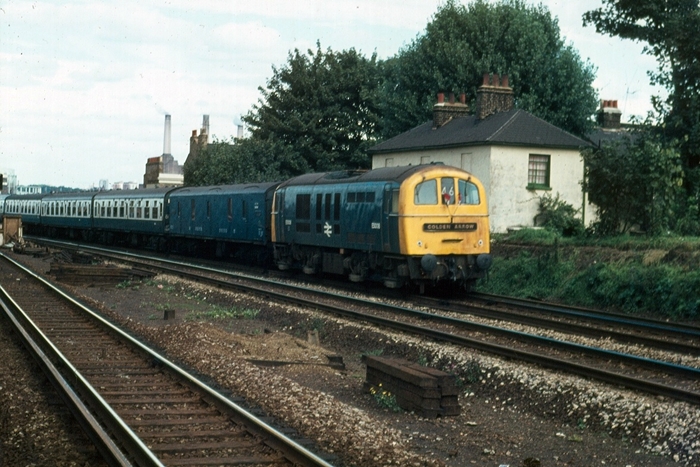 E5000 series No. E5008 is seen passing the site of the ex-LC&DR station on the ''down'' main, hauling the famous ''Golden Arrow''. This luxurious service had ceased to be all-Pullman in 1954, and by the time of this photograph, most of the formation comprised BR Mk 1 vehicles. Much evidence remained of the ex-LC&DR station, including the gap in-between the ''up'' main and relief lines, and the Station Master's house. The latter can be seen in the background, with a whitewash finish and blocked up windows. Towards the top left can be seen the chimneys of Battersea Power Station, at this time still very much operational. © David Glasspool Collection