Long before the London Bridge to Charing Cross extension plan had been conceived, the SER’s interest had been stimulated by the LSWR’s proposals to take its route beyond Nine Elms, to the Waterloo area of the South Bank. In 1846, the SER anticipated extending its line from the former terminus of Bricklayers Arms, through to the LSWR site (which was to open on 11th July 1848). In fact, when planning the eastward extension from Nine Elms, the LSWR publicised that the provision of four tracks to Waterloo was to accommodate any potential traffic generated from hiring out lines to other companies, such as the SER - or, more prominently, the LB&SCR (which was yet to reach Victoria). The SER scheme of 1846 failed to receive Parliamentary approval, but, paradoxically, the LSWR had acquired Royal Assent in the same year for an extension from Waterloo, through to London Bridge. This was followed two years later by approval being acquired for the establishing of a separate terminus to the south west of London Bridge – thus, Waterloo was designed as a through arrangement to accommodate this line. By the end of the decade, the scheme had fallen on stony ground as a result of cash flow problems, but a direct connection with London Bridge would come to light again.

In 1859, an Act was finally secured for the extension of the SER lines westwards, over the Thames and into a new terminus. The construction task was completed under the auspices of the ‘’Charing Cross Railway Company’’, and comprised 1⅓ miles of route suspended over the high-density area by a succession of viaduct spans and, over the Thames, the Hungerford Bridge. The £4 million extension opened through to Charing Cross on 11th January 1864 and a single-track connecting spur with the LSWR at Waterloo was present from the outset. This provided the LSWR with a direct link with London Bridge, and its installation by the SER had been a requirement of the original Parliamentary Act. Indeed, whilst the West End was also reachable by means of this link, access to Charing Cross required an inconvenient reversal manoeuvre. Although this connection later gave a direct link to the City with the opening of Cannon Street on 1st September 1866, the LSWR favoured an independent route. However, a circuitous Euston to London Bridge (and, later, Cannon Street) service did operate from July 1865, utilising the single-track spur, but lasted only until January 1868. With the concept of providing an independent over ground connection between Waterloo and the City being an impossibility, the ‘’Drain’’ was born, underground services coming into use along this one and a half mile tunnel in 1898. Meanwhile, the SER had no station presence at Waterloo, its nearest set of platforms being situated a ¼ mile to the east at Blackfriars Road. Following discussions undertaken in early 1868 between Edward W. Watkin (then Chairman of the SER) and Lord Bury, a scheme was confirmed whereby Blackfriars Road station would be closed and subsequently replaced by a new set of platforms ¼ of a mile westwards, adjacent to the junction with the LSWR. The latter company had put the SER under pressure to provide a station adjacent to its Waterloo terminus, giving passengers a convenient interchange point between services.

The new station, appropriately christened ‘’Waterloo Junction’’, came into use on 1st January 1869, Blackfriars Road having seen its last trains the previous day. Since opening, the line between London Bridge and Hungerford Bridge had been triple track, Blackfriars Road demonstrating the same number of platform faces. In fact, it would not be wholly inaccurate to think that this station had merely been taken up in its existing form and then transferred to the new site. Waterloo Junction demonstrated the same fundamental layout: three platform faces were on offer, two of which constituted an island. The arrangement was a mirror image of the old site, however; whilst Blackfriars Road’s side platform face was to the south of the island, the Waterloo Junction layout comprised the reverse of this. An independent platform face was also provided on the curve of the spur. Bearing in mind that the Junction station was, comparatively speaking, a late addition to the SER’s network, it comes as no surprise that the company utilised clapboard during the construction of platform structures. Nevertheless, passengers were not to be disappointed in terms of protection from the elements: the island platform was treated with a canopy for the majority of its extent, and the side platform had its western half similarly treated. No footbridge was erected, track foot crossings instead being utilised. The station remained in this form for little over three decades, before improvements under the SE&CR were implemented.

Ordnance Survey of 1914, showing the single-track connection between the SE&CR station and the LSWR's

terminus. Also in evidence, at the western end of the station, is the signal box straddling the running lines,

which was latterly dismantled by the SR and transferred to Ryde St Johns Road, on the Isle of Wight. 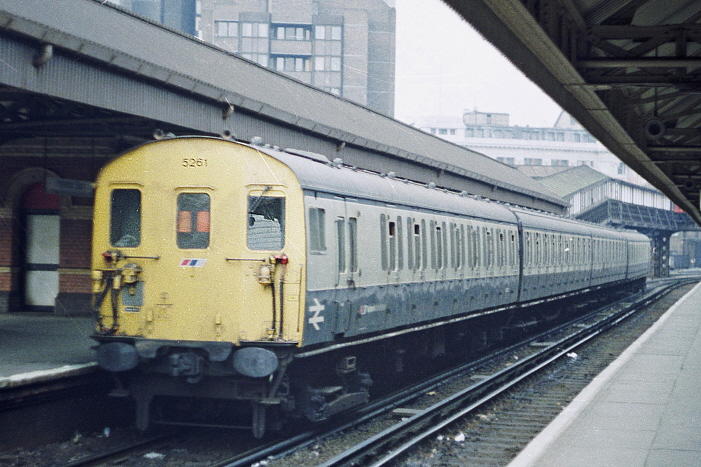 4 EPB No. 5261 is seen departing Waterloo East for Charing Cross, a year after partial modernisation and

restoration of the lattice footbridge had occurred. The corrugated metal canopy valances were wearing a

dreary grey scheme at this time, but the brickwork of the platform offices was spruce and clean. Worthy of

note are the pair of Bulleid-designed trailers of the EPB unit, sandwiched between a pair of BR-designed 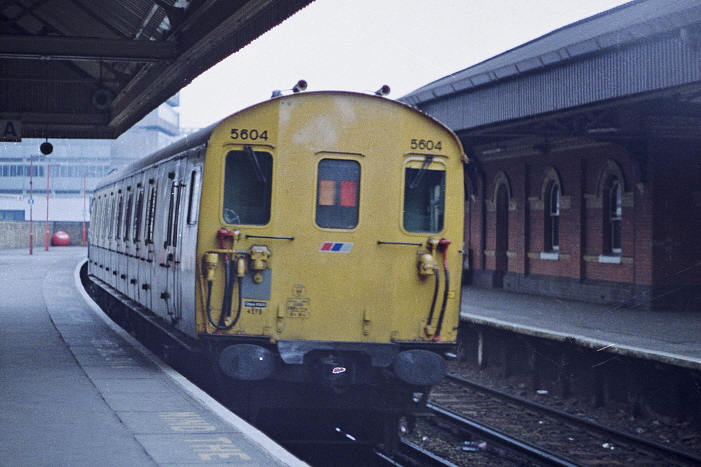 4 EPB No. 5604 is seen departing for London Bridge, wearing BR Blue and Grey livery, but with NSE ''Flashes''.

In the background, on the left, is the platform area which later became host to a new entrance and canopy for 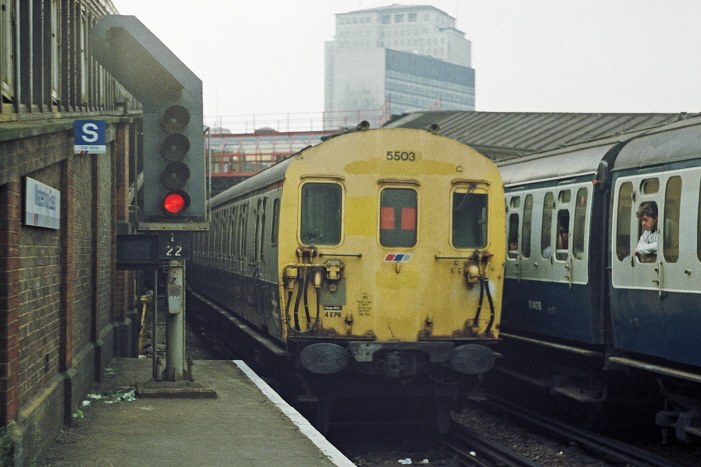 Bulleid-designed 4 EPB No. 5503 is seen departing for Charing Cross, underneath the then new glazed upper

half of the lattice footbridge. The red line immediately below the roof, above the driver's cab window, indicated