As mentioned elsewhere on the website, the Hastings line via Tunbridge Wells has stood the test of time remarkably well. The line opened in stages between 1845 and 1852, and of all those stations that came into use at the time, main buildings of SER origin still exist today. These are attractive and substantial buildings, erected at a time when little expense was spared on station construction, regardless of how large or small the nearby town or village was. By the latter part of the 19th Century, new station construction under SER auspices was increasingly, but not exclusively, of the ‘’economical’’ type. Less emphasis was put on building large, impressive structures, and more put on providing stations at a modest cost. This perhaps helps to explain in part why West St Leonards, which opened 35-years after the line on 1st October 1887, is of the SER’s favoured timber construction.

The station was built within a cutting on the tightly curved approaches to Bopeep Junction – so tight, that guide rails were put in place. At Bopeep Junction the double-track SER and LB&SCR routes, from Tunbridge Wells and Lewes respectively, converged for the final 1½-miles to Hastings. Economical compared to its older sisters along the line, West St Leonards was nevertheless an attractive affair. Two 450-foot-long platforms were brought into use, both of which were host to splendid canopies of 105-feet extent. The canopies were identical to those already in use at neighbouring Warrior Square; timber valances were of the standard SER clover pattern, and the roofs sloped downwards towards the running lines. Whilst a barrow crossing existed across the tracks at the platforms’ southern ends, the station had the luxury of a roofed lattice footbridge, 60-feet in length. By this time, more stringent Board of Trade regulations had almost made footbridges a mandatory feature, whereas in years gone by a track foot crossing sufficed. The footbridge was supported at either end on substantial brick staircases and provided access to the station from both sides of the cutting. Finally, we come to the main station building, which was elevated in relation to the platforms. It was situated on top of the cutting on the ‘’up’’ side, level with the footbridge. From the roadside, it appeared to be a standard SER clapboard affair, 80-feet in length with sash-style windows, a hipped slated roof and a trio of brick chimneystacks. On the rail side, things were a little unusual, where a sloped covered walkway descended to the ‘’up’’ platform. The walkway was completely shielded from the platforms by a huge brick wall – the roof was in the form of a standard timber canopy. The main building was complemented at platform level, to its south, by a single-storey clapboard structure, 35-feet long with a pitched roof. On the ‘’down’’ platform, a single-storey brick-built toilet block could be found at the northern end of the canopy.

This station has never been host to any goods facilities or sidings, but signal boxes have existed at either end of the layout. The first was positioned 80-yards north of the ‘’up’’ platform, whilst the second could be found at the mouth of Bopeep Tunnel – the latter controlled the junction of the converging SER and LB&SCR lines. In about 1925, shortly after the advent of the Southern Railway, these two cabins were abolished and replaced by a single signal box, positioned in the fork of the junction. This cabin was a ‘’hand-me-down’’, having been made redundant elsewhere and re-used in typical SR fashion. Known from the outset as ‘’Bopeep Junction’’, it was of SER design with sash-style windows, comprised a new red brick base, and sported a new pitched – rather than hipped – roof. Other prominent examples of signal boxes being re-used by the SR include Ryde St John’s Road (formerly at Waterloo Junction [East]) and Canterbury West (formerly at Blackfriars Junction). At this time, a trailing crossover between the tracks came into use north of West St Leonards, the platforms were rebuilt in prefabricated concrete, and Swan Neck gas lamps were brought into use.

The Central Section lines to Seaford, Eastbourne, and Hastings were electrified in 1935, at a cost of £1,750,000 (£94,700,000 at 2010 prices). Public electric services to Hastings commenced on 7th July of that year, but the Eastern Section line to the coastal town via Tunbridge Wells remained steam-hauled. Behind Bopeep Junction signal box, a concrete rectifier substation was erected, one of sixteen built as part of the Hastings scheme and one of five operated from a new control room at Ore.

In November 1946, a £15,000,000 electrification scheme (£485,000,000 at 2010 prices) was announced, which aimed to eliminate steam traction on all lines east of Portsmouth. The main constituents of this included the Kent Coast Main Lines via Tonbridge and Faversham, but also on the list were the Hastings line via Tunbridge Wells and the Bexhill West branch. Those lines not electrified would assume diesel-electric operation. These plans were somewhat overtaken by nationalisation, and rather than electrifying through to Bopeep Junction, to join the existing third rail from Lewes, dieselisation was the order of the day. As part of this scheme, the platforms at West St Leonards were extended at their southern ends in 1957, using prefabricated concrete. The full diesel timetable on this route commenced on 9th June the following year.

Electrification of the Hastings line was approved in 1983, which encompassed complete re-signalling of the route and track layout alterations. In connection with this, noticeable works took place at West St Leonards, beginning autumn 1985. The southern platform extensions of 1957 were demolished, the ‘’up’’ platform partially rebuilt, and new layers of asphalt applied to both surfaces. The ‘’up’’ line was re-laid and the speed restriction through the station eased from 20 MPH to 25 MPH. New lampposts were installed on both platforms and glazed ‘’bus shelters’’ brought into use – it appears that the SER canopies were casualties of the previous decade, rather than during electrification works. The first day of electrified services on the Hastings line was on Sunday 27th April 1986. Robertsbridge and Bopeep Junction signal boxes were the only ones along the line to be retained thereafter. The former was equipped with a new panel, and the latter continued to control the junction between Lewes and Tunbridge Wells lines, in addition to the entrance to St Leonard’s Depot.

Today, West St Leonards can be considered a fortunate survivor of quintessential SER timber architecture. Modern waiting shelters were installed here in 2004 and whilst the platform canopies have sadly long since gone, this station remains largely complete. Many sites of this ilk were either rebuilt under Network SouthEast auspices or, during the same period, victims of arson attacks. With reference to the latter, nearby Ore, which opened three months after West St Leonards, lost its main timber building to arson in the 1990s. 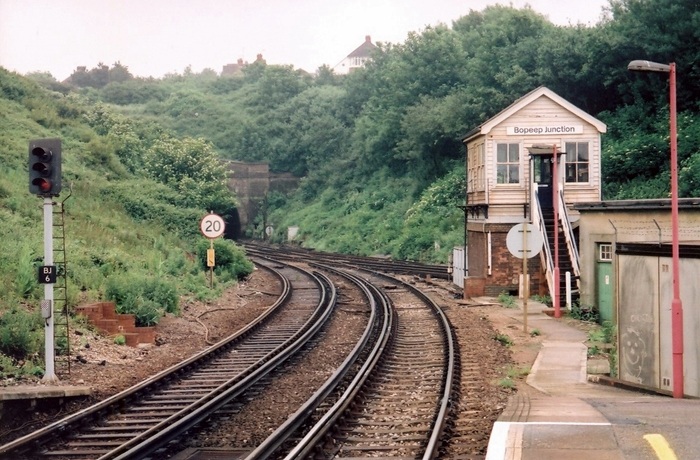 A Hastings-bound view shows the portal of Bopeep Tunnel, 1318-yards-long, and the converging Tunbridge

Wells and Lewes lines. The platforms here were extended up to the signal box in 1957, but were cut back to

their original states in 1985, during electrification works. © Bob Fairman 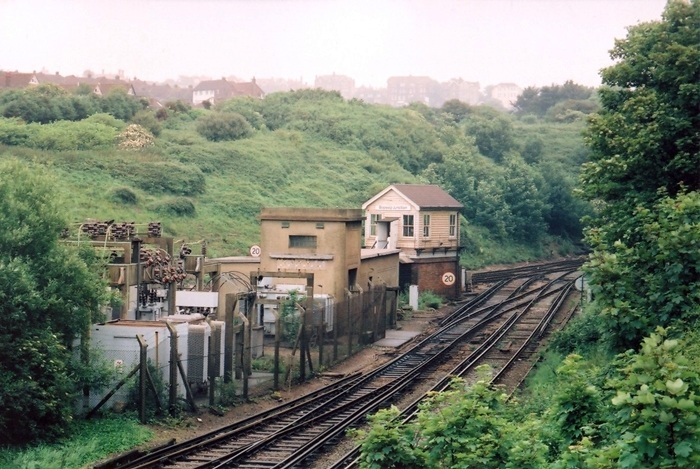 This second view of the signal box is taken from above the Central Division approaches from Bexhill. The

concrete-built rectifier substation dates from 1935 electrification of the Central Section lines. The signal

The latter can be seen branching off at the lower left. © Bob Fairman 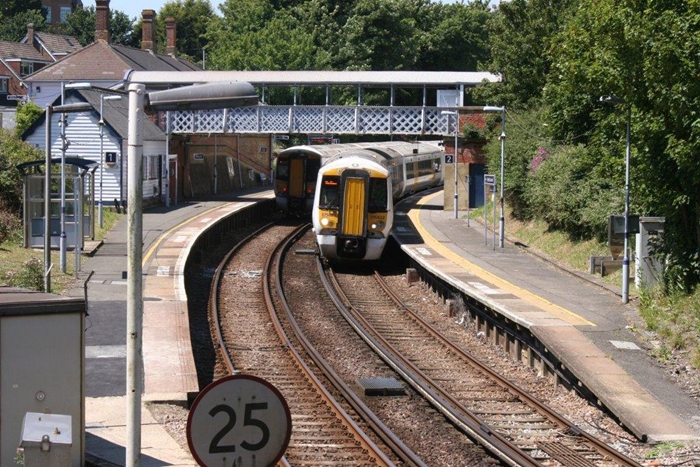 Electrostars pass each other in the station in this view taken from the signal box. The lattice footbridge has

been fortunate in retaining its roof. The SER clapboard main building can be seen at the top left, level with

the footbridge. Underneath the latter, the huge brick wall that shields the walkway to the ''up'' platform can

Behind the Scenes at Bopeep Junction >>