This is one station along the Salisbury to Exeter route which the Western Region left largely complete post-1967. It was only after the advent of the British Rail Business Sectors that layout rationalisation finally caught up with Whimple. The station came into use on 19th July 1860 when a single-track extension from Yeovil to Exeter opened for regular passenger traffic. The route was profitable at an early stage, and on 19th July 1870, exactly ten years after opening, double-track working commenced. The line was a worthy rival of the earlier-conceived route of the GWR, which took a circuitous course from Paddington to Exeter, via Bristol – the Berks & Hants Cut-Off was not to materialise fully until 1906.

In 1860, Whimple was a small parish with a population little over 700. It resided on the eastern rural outskirts of Exeter, the latter of which was about eight miles distant. A humble place it may have been, but no half measures were taken when the time came to provide a station. As has been indicated elsewhere on this website, the majority of stations west of Salisbury were standardised on an attractive Gothic design credited to architect Sir William Tite. Fortunately, many examples still exist today, to be marvelled at either by the historian or passer-by. Two platforms came into use at Whimple, and it was the ‘’up’’ surface which was host to the main station building. Like its neighbour to the west at Broad Clyst, the structure comprised a central two-storey-high section flanked on either side by single-storey appendices. Construction was largely red brick, but with stone used at wall edges to create a patterned effect. Substantial chimneystacks emerged through the slated pitched roof sections, and emanating from the main building’s southern elevation was a 60-foot-long canopy. The latter was supported upon four cast-iron stanchions and demonstrated an irregular saw-tooth valance pattern, a design unique to this section of route. Whilst the main buildings along the route may look identical, there are always detail differences, some more obvious than others, which tell them apart. Upon the ‘’down’’ platform was a brick-built waiting shelter, comprised of twin gabled pitched-roof sections flanking a central piece with a forward-sloping roof. This was also built to a standardised design, in sympathy with the station building; unfortunately, the later singling of the route saw the abolition of most of these shelters and today, not one example remains. Finally, the platforms were linked by an iron-framed footbridge, located immediately to the east of the main building. Compared to its counterparts at Honiton and Axminster (to name just two), the footbridge was a rather frugal affair, lacking both glazing and a roof.

Whimple was well known locally for its rolling hills of orchards, full of apple trees, and this would have generated goods traffic for the railway. In addition, the orchards also led to a burst of weekly passenger traffic: in 1892, a cider factory opened beside the station’s approach road, for which many workers arrived and departed by train. The population of the parish also began to rise, as houses were built for the cider company’s workforce. The station’s goods yard was a neat layout, positioned east of the ‘’up’’ platform and running parallel with the double-track main line. It comprised a pair of eastward-facing sidings, one of which terminated within a brick-built goods shed. At the turn of the century, a corn mill was opened immediately north of the goods yard, and this received a rail connection with the sidings. Interestingly, a single-track emanated from the mill and joined the northern of the two sidings at right angles, the link being made by means of a small wagon turntable. The layout was controlled by an LSWR-designed signal cabin located at the eastern end of the ‘’down’’ platform. Signal boxes such as this were quaint, attractive affairs, built to a standard LSWR design of clapboard sides and a hipped roof.

The drastic changes enacted at Whimple are mainly confined to the British Railways era, in common with the majority of stations between Salisbury and Exeter. These appear to have commenced in 1955, when both the station building and waiting shelter were painted all-over in a whitewash finish. The main building was also altered structurally: the protruding stone edges of both northern and southern façades were cut back, allowing the slated pitched roof to overhang the walls. Concrete bracket lampposts – a product of Exmouth Junction concrete works – were installed upon the platforms. Rationalisation of the site was destined to commence after the transfer of the lines west of Salisbury to Western Region control, in September 1962. Single-track working between Chard Junction and Pinhoe commenced on 11th June 1967, which saw the decommissioning of Whimple’s ’’up’’ platform. Thereafter, all services called at the ‘’down’’ platform, but a footbridge was retained between the two surfaces, given that the station entrance remained on the ‘’up’’ side. Thankfully, the station was not obliterated in the same fashion as that at Honiton, and the presence of the cider factory appears to have played its part. The goods yard closed to general traffic on 4th December 1967, but the sidings and shed were retained for use by the cider company, at that time still owned by its founding family, the ‘’Whiteways’’. Since the outset, the goods yard had only ever had a direct connection with the ‘’up’’ line, thus in spite of singling of the route, half a mile of this track remained in situ, continuing to pass by the disused platform. For the time being, Whimple remained as a mostly complete example of an LSWR station west of Salisbury.

Whimple cider factory eventually closed in 1989, and little time was wasted in simplifying the layout at the station. During July 1990, layout rationalisation commenced, leaving just the single-track passing the ‘’down’’ platform in situ. By May of the following year, the entire goods yard site had been levelled, and the shed building was no more. Subsequently, the single-track running line was slewed on a new alignment, to run upon the course of the former ‘’up’’ line, past the long disused platform. As a result, Whimple’s ‘’up’’ platform was re-commissioned and the ‘’down’’ platform taken out of use. Demolition of the latter occurred which, sadly, included the destruction of the LSWR waiting shelter, the last example of its kind remaining. The footbridge was also swept away, and a clinical glazed shelter was installed on the ‘’up’’ platform. All works were completed by 1994. 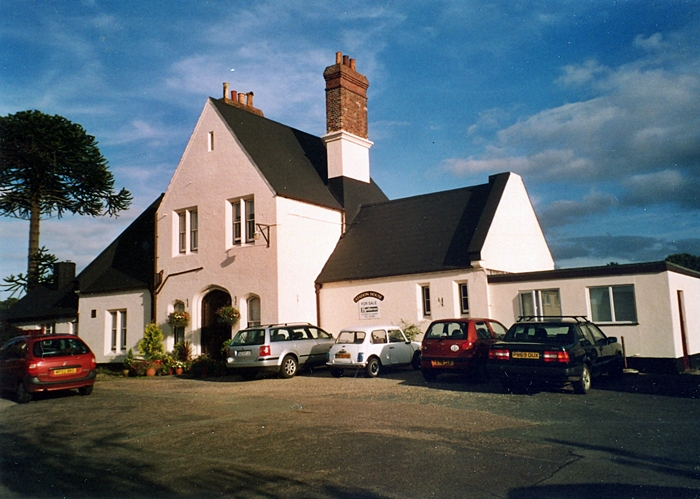 The station façade presented a smart appearance in 2004, despite the fact that it has been painted over since the

1950s. The red brick, can, however, still be witnessed in the chimneystacks. By this time, the building was a private

residence appropriately named ''Station House'', and was up for sale. David Glasspool 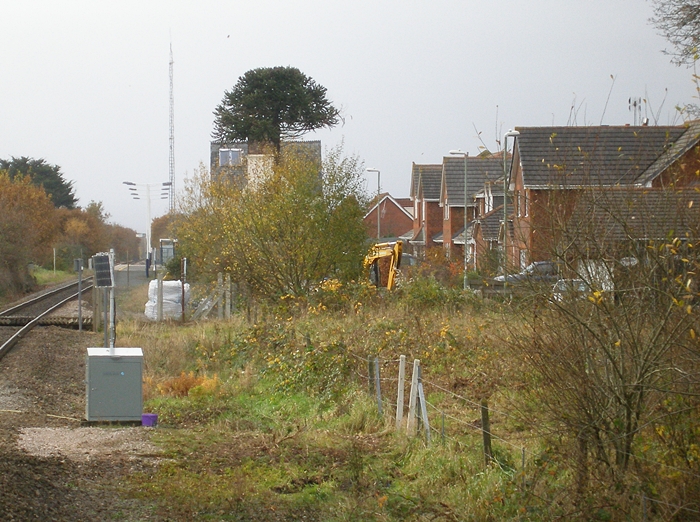 The station is in the background of this westerly view. The overgrown area on the right was formerly host to

the goods yard, which survived up until 1990. The new houses on the right were built on allotment land. 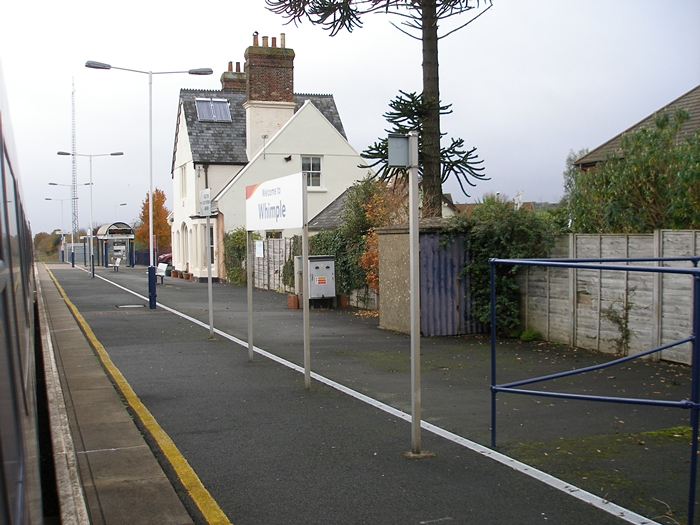 In recent years the main building has acquired solar panels on its roof, but still retains a smart appearance. In

the background is the waiting shelter installed after the former ''up'' platform was re-commissioned in 1994.