This was one of nine regional freight terminals developed specifically to handle Channel Tunnel intermodal traffic. Dubbed “Euro-terminals”, these formed part of a £450,000,000 investment in Chunnel freight by British Rail, which included the procurement of the Class 92 electrics and establishment of the inspection yard at Dollands Moor. However, with the collapse of intermodal freight traffic post-2000 (more of later), these terminals have become part of a long list of expensive Chunnel projects which have never lived up to their potential.

The “intermodal” concept revolves around transporting a large range of commodities in containers/swap bodies, which can simply be transferred between rail and road transport, avoiding the need to unload/load the contents when the mode of conveyance changes. It was envisaged that after the opening of the Chunnel, there would be 35 intermodal freight trains in each direction between Britain and Mainland Europe every day. To cater for this traffic, BR - through business sector Railfreight Distribution - spent about £87,000,000 of the aforementioned £450,000,000 Chunnel freight budget on the following:

Euro-terminals at Birmingham, Cardiff, Cleveland, Stratford, and Willesden were to comprise a series of sidings equipped with overhead cranes, integrated with a road network and customs facilities for transfer of continental freight between train and lorry. These terminals could handle containers of up to dimensions of 2.75 metres high by 2.6 metres wide, and 2.77 metres high by 2.5 metres wide. The Euro-terminals at Liverpool, Mossend, Trafford Park, and Wakefield were a step up from the five just mentioned: these were to become fully integrated “freight villages”. This meant that in addition to the standard rail/road transfer and customs facilities for intermodal operation, such was the optimism that these terminals would also have land available for development into hotel accommodation, shops, and overnight Heavy Goods Vehicle parking – essentially, the equivalent of a motorway service station. All terminals would be linked by computer to freight destinations in Europe, so the progress of trains could be tracked.

Trafford Park Euro-terminal was established on land adjacent to existing Freightliner sidings, whilst at Mossend, Railfreight Distribution already had a yard which handled departures/arrivals for the train ferry at Dover. The Euro-terminal at Willesden was a development of an existing Freightliner yard, which had direct links with both West Coast Main and West London Lines, residing about 5½ route miles from Euston. As an interesting aside, this land was the former site of the famous Willesden Engine Shed, which closed under London Midland Region auspices in September 1965.

Willesden Euro-terminal comprised thirteen parallel-running sidings, five of which were through loops. These were electrified on their approaches only and over these lines towered four yellow-painted travelling cranes. The entire terminal occupied an area of about 150,000 m2, of which over half was dedicated to container storage. The first Chunnel freight departure between Britain and France left Willesden Euro-terminal on 27th June 1994; the first “Eurostar” passenger service from Waterloo International did not run until 14th November of the same year. Subsequently, on 22nd November 1997, Railfreight Distribution was sold to English, Welsh, & Scottish Railway (EWS), which included the leasehold of the site at Willesden.

The Channel Tunnel has for long faced a unique set of challenges which have prevented its full annual capacity of around 10,000,000 tonnes of freight traffic from ever being realised. By 1997, Chunnel freight amounted to 3,000,000 tonnes per year, the majority of which was intermodal traffic, but over the subsequent decade, this declined by two-thirds. This has been caused by a combination of factors, one being, since late 2001, the influx of illegal immigrants to the Calais area, which has resulted in regular trespass incidents in and around the tunnel. As a consequence, the tunnel has witnessed closure for extended periods of time, particularly at night, when many freights are scheduled to run. This has been compounded by frequent strike action, which has not made freight via the Chunnel an attractive option to potential customers. Additionally, the sale of Railfreight Distribution to a single operator, EWS, also created a monopoly for the latter in UK Chunnel freight operation, preventing other players breaking onto the scene. Crucially, EWS acquired the only BR freight locomotive type authorised for Chunnel operation - the Class 92 - and came into ownership of the yard at Dollands Moor, a compulsory stop for continent-bound goods trains.

As a result of the aforementioned factors, by 2005, Willesden Euro-terminal had fallen into disuse, through the evaportation of the intermodal traffic it was originally opened to serve. EWS' lease on the site lasted until 2119 and, in the absence of Chunnel freight, a series of new uses for the land were found. This has involved EWS (and, since 2007, its successor "DB Schenker") subleasing sections of the site out to other companies, including:

Should the High Speed 2 scheme ever take off, the site of Willesden Euro-terminal has been identified as a rail head during the route's construction, where excavated material will be handled and forwarded on elsewhere for disposal. 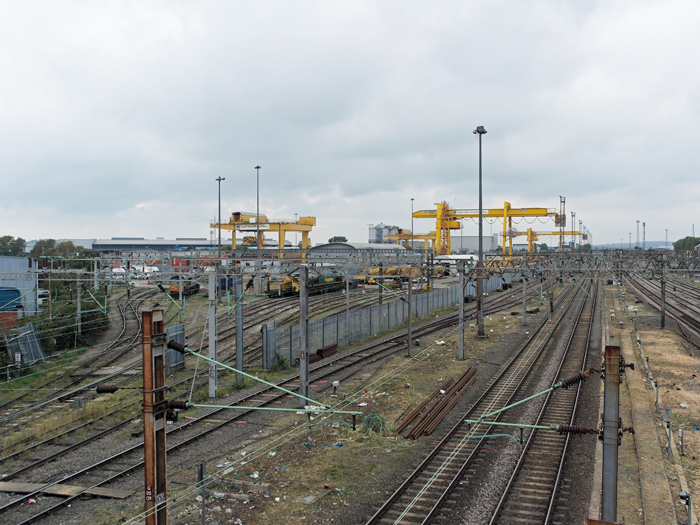 A westward view 5½-miles out from Euston shows the four travelling cranes, the furthest of which still had "Railfreight Distribution" signage. Two Class 66 locomotives, both from the "Freightliner" fleet, were in the company of Network Rail's ballast cleaning train. Two tracks of the quadruple West Coast Main Line are in the foreground. © David Glasspool