Razed to the ground after complete closure by British Railways in 1961, this station has risen from the ashes under the auspices of the preserved ‘’Kent & East Sussex Railway’’ (K&ESR). Wittersham Road originally came into passenger use with the ‘’Rother Valley Railway’’ (RVR) between Robertsbridge and Tenterden on 2nd April 1900, goods traffic having commenced on 29th of the previous month. As mentioned elsewhere on the website, the line was subject to a 1⅓-mile eastward extension to a more conveniently-sited ‘’Tenterden Town’’ station, and was eventually taken as far as Headcorn, where it met the ex-SER Dover trunk line. These extensions came into use on 16th March 1903 and 15th May 1905 respectively, and the RVR became known as the K&ESR from 1904 onwards.

The line was engineered by Holman F. Stephens, and architecture was standardised along the route, a practice which had been followed by numerous of the larger railway companies nationwide. The route was single-track throughout, and in common with most stations on the line, just a single brick-built platform surface was provided at Wittersham Road. The station resided 2¼-miles northwest of the village it purported to serve, hence its ‘’Road’’ suffix, and its construction certainly seemed reminiscent of the old SER policy of providing stations at a ‘’modest cost’’! Wittersham Road’s main building was a typical unassuming H.F. Stephens affair: single-storey, it was fully fabricated from corrugated iron – as per all those structures in-between Robertsbridge and Tenterden Town exclusive – and incorporated sash-style windows. The fact that the building was erected at right angles to the platform seems to explain why it was the only station structure along the entire route to lack a canopy. The very same style of construction could be found on H.F. Stephens’ contemporary Sheppey Light Railway in North Kent, and on those railways he engineered in far flung locations in Shropshire and Wales.

Wittersham Road’s platform was lined at its rear by wire fencing, which in turn was accompanied by rectangular-shaped gas lamps supported upon wooden posts. Behind the platform could be found the station’s goods facilities, which comprised a pair of Tenterden-facing sidings, access to which was controlled from a lever frame positioned north east of the layout. Signalling at the site was primitive, simply comprising a double-armed semaphore post at the Robertsbridge end of the station platform, which resided immediately adjacent to a level crossing. The latter was protected by a pair of timber gates, to which were affixed a red warning diamond, as opposed to the more customary circle. This was not unique to Wittersham Road, a number of other level crossings along the route being similarly treated. It is worth noting that the station lacked a loop, thus it was not possible for trains to pass in the station (unless, in an extreme case, a train service was stabled in the goods yard to let another pass!).

Naturally, the station led a quiet existence on a decidedly rural route, but the monotony was broken as a result of World War II. In February 1941, the goods yard became host to a 32-ton rail-mounted gun, which could fire 9.2-inch diameter shells, and had a range of twenty miles. Thus, in the event of an invasion, the gun’s fire was able to hit the coastline of the Romney Marsh. The gun was not used in anger, although was test fired, and to move the colossus, an ex-GWR 0-6-0 ‘’Dean Goods’’ locomotive, now under ‘’War Department’’ ownership, was provided on the line. The locomotive was also used to move an identical gun based at Rolvenden. To accommodate the gun at Wittersham Road, an ammunition store was erected in the goods yard, as was a gun crew hut. A military presence remained at the station until August 1944. 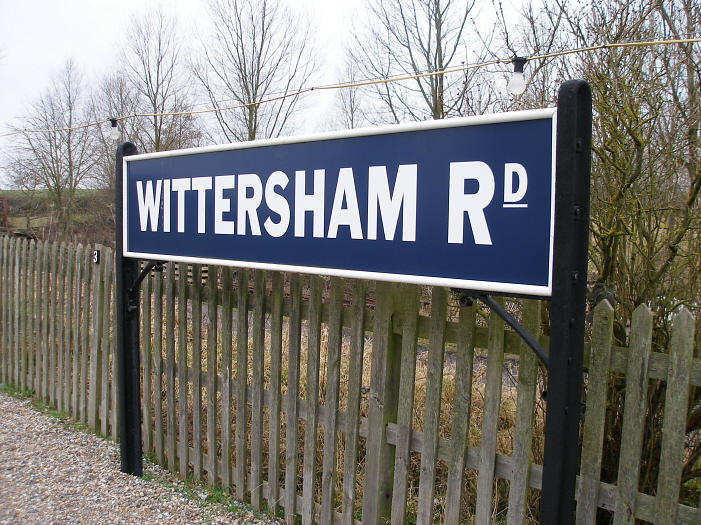 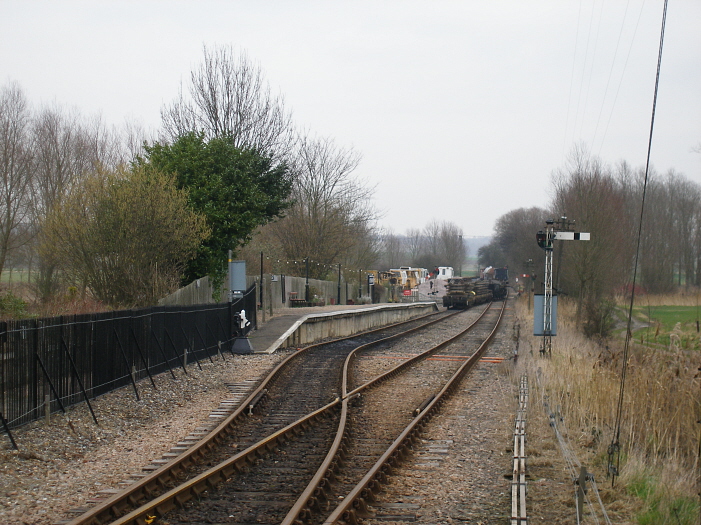 After complete closure of the line by British Railways in 1961, the entire site was obliterated, thus all infrastructure

in this view has either been built from scratch, or come second-hand from elsewhere. The fact that the station formerly

acted as the terminus for the preserved line necessitated the laying of a run-a-round loop, a feature which the original

layout lacked. The new-build platform was thus set back from the site of the old, to permit a double-track to be laid. 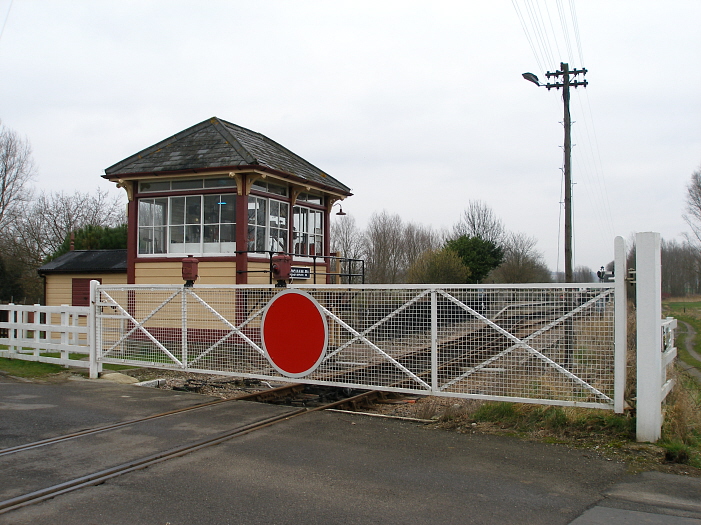 In addition to a passing loop, another feature lacked by the original layout was a signal box. The splendid

into use at Deal Junction, on the commissioning of the ‘’Kearsney Loop’’, on 1st July 1882. Expansion of

the Dover Priory Panel's scope in 1980 saw the cabin become redundant, and it was subsequently dismantled

and transported to Wittersham Road for re-use. David Glasspool