The town’s first station to open was that of Woolwich Dockyard, this coming into use with the whole of the SER’s North Kent Line on 30th July 1849. The more conveniently located Woolwich Arsenal station was commissioned later the same year, on 1st November. The first complex was indeed comprehensive, and it easily made the station the primary one on the route. Two platform faces, below street level, were in evidence from the outset, and within twenty years, a footbridge had appeared between the two. It is likely that the original station building here, positioned on the ‘’up’’ side, was similar in appearance to the example at nearby Charlton. Throughout the SER’s existence, the Arsenal station was an important locomotive stabling point: positioned on the ‘’up’’ side, to the east of the platforms, was a two-road dead-end westward-facing engine shed. During its career, the depot was sub to the huge complex at Bricklayers Arms, as was the shed at nearby Deptford. To complement Arsenal’s shed, the SER installed a turntable just to the west of the building, this having two short westward-facing stubs running off it. Goods traffic was certainly not forgotten, and the ‘’down’’ side featured a trio of eastward-facing sidings, the most northern of which terminated within a goods shed.

Under the SE&CR, the original complex was totally obliterated. In 1905, the company hired in contractors W Patterson & Sons Ltd to rebuild the Arsenal layout and partially modify the existing station at Charlton Junction. By the end of 1906, Arsenal station had witnessed a complete transformation. The main offices were still on the ‘’up’’ side, but were far larger, demonstrating a length of 250 foot against the original 50 foot. The central 90 foot portion of this structure was two-storey, the outer eastern and western flanks being one-storey high. The structure’s design seemed to be inspired by the somewhat plain, but imposing, Station Master’s house at Belvedere, which had emerged earlier in 1859. The ticket office had been shifted to high street level by employing a favourite design feature of the LC&DR’s, in its latter days: the structure was suspended across the tracks, at the western end of the site. Single-storey and with a pitched roof, it can accurately be described as a more elaborate version of the 1959 BR rebuild of Bromley South’s main structure, this similarly suspended. As a result of the rebuild, the ‘’down’’ side became host to an interesting feature, which could already be found at Snodland, on the Medway Valley Line: the platform canopy shared the retaining wall of the goods shed. This arrangement was possibly selected in light of the limited amount of space. Indeed, the goods shed here was ever so slightly curved to match the profile of the platforms and running lines, and demonstrated a prominent pitched roof, was single-track, and eastward-facing. Both platform surfaces were lined on their outer edges by single-storey high yellow brick walls, these of which supported 400-foot long canopies. The latter were still in existence until May 2006.

During the SE&CR’s early reign, a number of locomotive depot improvements were made in a bid to speed up suburban railway services on both ex-SER and ex-LC&DR lines. Of the latter, a then new shed came into use at Orpington after the 1904 quadrupling works, which allowed a number of smaller sheds, such as Bickley, to close. Similarly, the advent of Slade Green Depot in October 1899 (the plans of which had been finalised under the SER) also marked the beginning of the end for Woolwich Arsenal’s shed and turntable – both were dispensed with during the 1905 / 1906 works. Large purpose-built depots, such as Slade Green,  incorporated locomotive facilities which just could not be accommodated at smaller station sites.

The presence of a goods shed has already been touched upon, but there were quite a number of other sidings, despite Plumstead being the main hub for traffic to and from the Royal Arsenal. Indeed, all of these were positioned to the east of the platforms, for there was no space whatsoever at the western end of the layout – here, the running lines immediately disappeared into a cutting through the town centre. The single track of the ‘’down’’ side goods shed was matched on the ‘’up’’ side, albeit without a building, this terminating behind the platform, where the station structure began. The array of lines were controlled by a signal box which still perpetuated the classic style of the SER, with the trademark sash-style windows and clapboard construction (a good example of this design can still be seen at Snodland, although Arsenal’s cabin was twice the length). The cabin was located to the east of the ‘’up’’ platform, and also controlled a further four sidings to its left, these split in two pairs either side of the running lines.

Service improvement occurred under the Southern Railway with electrification to as far as Dartford in June 1926, followed by extension to Gravesend in July 1930, then to Gillingham nine years later. Naturally, steam remained on the route in the form of Kent Coast excursions and goods traffic, and was still at work in the sidings to the east of Arsenal’s platforms. It was under British Railways that goods traffic at the site was to cease: this occurred on 17th May 1965, by which time steam had vanished on the South Eastern Division (excepting a pair of USA Tanks at Ashford works), and the sidings had been worked by Hither Green-based Type 3 (Class 33) diesels. The goods shed was subsequently demolished, but its southern elevation had to be retained – the canopy of the down platform shared this. Meanwhile, the platforms had been lengthened with prefabricated concrete at their eastern ends in April 1956, in preparation for ten-vehicle operation on this route. The signal box lasted until 1970, closure coming on 15th March of that year when control was transferred to a temporary panel at St Johns (this preceding the London Bridge ‘’power box’’). Further, quite significant, alterations did not occur until 1996. In this year, the 1906-built high-level entrance was demolished and replaced by a structure demonstrating the same architecture employed at the rebuilt Ashford International station; the original ground-level buildings remained. Both Woolwich’s and Ashford’s then new structures were products of British Rail's ‘’Architecture & Design Group’’.

In 1999, a study concluded that it was feasible to extend the planned Docklands Light Railway line to London City Airport, under the Thames to terminate alongside Woolwich Arsenal station, on the site of the former goods yard. The project was estimated to take three and a half years to complete, with work beginning in mid-2005. On 20th May of the following year, the ‘’down’’ side platform was closed to passengers, to allow major modification work to be undertaken. For this project, the delightful SE&CR canopies of the existing station were replaced with modern equivalents, in conjunction with the complex receiving new toilet facilities, lifts, and an additional platform face. The original ‘’down’’ side retaining wall was demolished and a new crème example erected behind the recent platform canopy. The ‘’down’’ platform re-opened as scheduled, on 20th August 2006, but until this time, passengers wanting to alight at Woolwich Arsenal on a Dartford-bound train had to travel down to Plumstead, then return on a London-bound service. 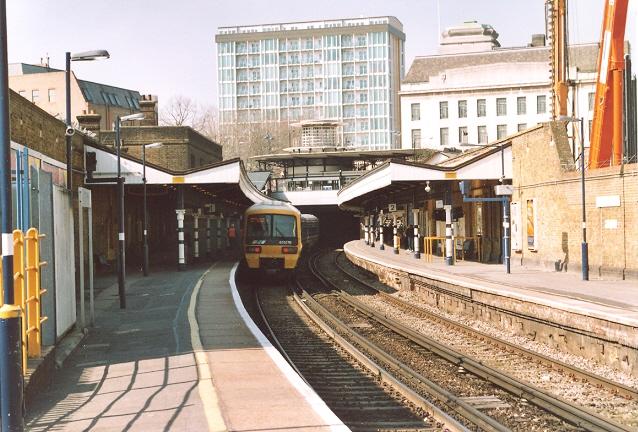 A London-bound view on 23rd March 2006 reveals all major structures. On the left can be seen the

station building of 1906. On the right is the former retaining wall of the goods shed. Beyond this wall

can be seen the huge cranes being used in conjunction with the Docklands Light Railway extension.

It is this wall which will probably be demolished to link the two sites. The yellow railings in the foreground,

can be seen the high-level entrance of 1996, demonstrating a distinct similarity to Ashford International. 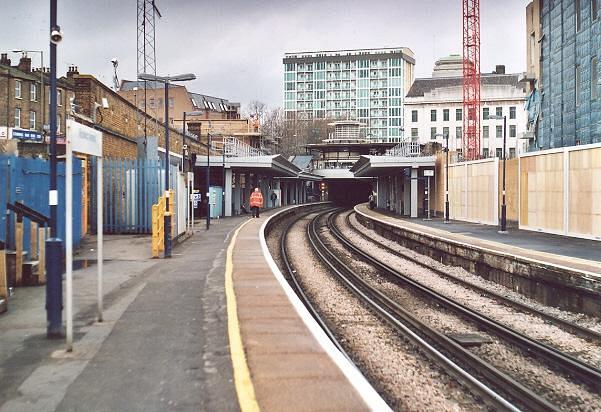 This London-bound view from 23rd February 2007 shows the progress of the station rebuilding.

more, having been replaced by rather crude metal types. Interestingly, the ''up'' side offices are