This is a station with a chequered history, having closed less than fifteen years after originally being opened, only to be brought back into use at the turn of the 20th Century. Still open for passenger traffic today, the site is located deep in rural territory which, whilst a pleasant retreat in the spring and summer, very much becomes a bleak, lonely outpost as winter closes in. Civilisation at Lyndhurst, Ashurst, and Beaulieu are all equally far from the station, being three miles distant as the crow flies, whilst Brockenhurst is half a mile further still.

Beaulieu Road was brought into use with the ‘’Southampton & Dorchester Railway’’ on 1st June 1847, the latter of which was a circuitous extension of the LSWR’s London (Nine Elms) to Southampton main line. Having been unable to source a map of an early enough date, your author surmises that just a single platform was in evidence from the outset, on the eastern side of the running line. However, in spite of the station’s isolated setting, it still commanded a large residence for the Station Master. This was a substantial red-brick two-storey house comprising a slated pitched roof, through which protruded a trio of chimney stacks.

The line between Beaulieu Road and Lyndhurst Road stations, 2-miles 50-chains in length, was opened to double-track working in July 1857; that section between the former and Brockenhurst was similarly upgraded in 1858, two line running commencing on 1st September of that year. It was not long after this upgrade that Beaulieu Road closed to traffic, the station being removed from the passenger timetable in February 1860 (Clinker’s Register, 1980). Presumably, the expense of providing a second platform on the route’s doubling was still made. Maps subsequent to closure show the Station Master’s house and, passing over the line to the north of the site, the road bridge, but there is no evidence of any platform remains.

In 1895, thirty-five years after closure, the station was reopened to passenger traffic. The original Station Master’s house from the previous site was retained and, around the double-track formation, two gas-lit platforms were provided. Upon each was a brick-built waiting shelter, both of which sported pitched-roof platform canopies based on the outline of those that came into use at Sway, New Milton, and Hinton Admiral stations in 1888. Passage between the platforms was by the existing road bridge to the north, for which staircases on either side were provided, but a barrow crossing also linked the surfaces at their southern ends. A terrace of four railway cottages was built in the apex of the ‘’down’’ platform and the road, so at least the Station Master would not be completely alone on those dark December nights.

Evidently, the LSWR had a good go at reviving the once defunct Beaulieu Road, for the reopened station was also equipped with goods facilities. Perhaps New Forest agricultural traffic was looking promising at the time? This culminated in a single southward-facing dock line on the ‘’down’’ side of the main running tracks, branching off at about twenty degrees to the latter. Terminating at a cattle pen, it was connected to both running lines through a rather complicated formation of points (illustrated in the below diagram), and the layout was controlled from a signal box located just beyond the southern end of the ‘’up’’ platform.

In 1933, the Southern Railway closed the signal box, resulting in this section of route being controlled by neighbouring cabins. The ‘’up’’ line through Beaulieu Road was brought under the control of the signal box at Woodfidley Crossing, 1⅔-miles south of the station, whilst the ‘’down’’ line and its associated sidings fell within the jurisdiction of Lyndhurst Road.

Naturally, rationalisation of the site was left to British Railways, the organisation’s first act being the withdrawal of the site’s goods traffic in July 1960. The station was last staffed on 31st May 1964, ticket purchases/checks being made on the train thereafter.

The line was electrified from Brookwood through to Branksome (Bournemouth) in 1967, the full accelerated time coming into use on 10th July of that year. What this did provide Beaulieu Road for the first time was a fixed electric supply source, advantageous for an unstaffed station. This enabled the platforms to be electrically-lit, the power being sourced from the signalling supply (the then new colour light signalling system had been commissioned on this section of line on 23rd October 1966). An advancement this may have been, the subsequent years were not so kind to the station and as per Lyndhurst Road, which had similarly ceased to be staffed, structural cut-backs on the platforms occurred during the 1970s. The waiting rooms and canopies of 1895 vintage on both platforms were demolished and replaced by frugal glazed shelters. The Station Master’s house remained and became the residence of the caretaker for the nearby railway cottages, the latter of which by this time had become available for holiday letting.

In August 2010, construction contractor ‘’Osborne’’ arrived on site to undertake a platform refurbishment scheme. This involved taking down the 1970s shelters and renewing the lampposts. Unfortunately, the shelters which replaced their British Rail predecessors provide even less protection from the elements, but at least the former Station Master’s house, nearly 170 years old at time of writing, is still with us. 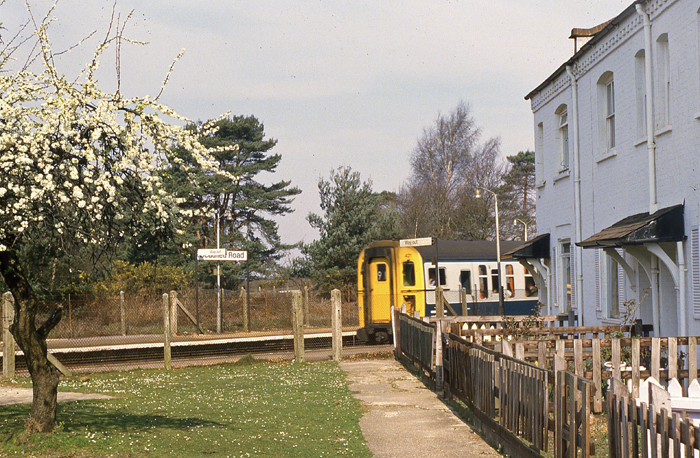 Spring has sprung! Blossom is in evidence as 4TC unit No. 421 passes through non-stop with a "fast" service to Bournemouth and Weymouth. The 4TC fleet were unpowered formations which were propelled from Waterloo to Bournemouth by 4 REP units. On the right are the railway cottages mentioned in the main text, whilst beyond can be seen the gateless "down" platform entrance. © David Glasspool Collection 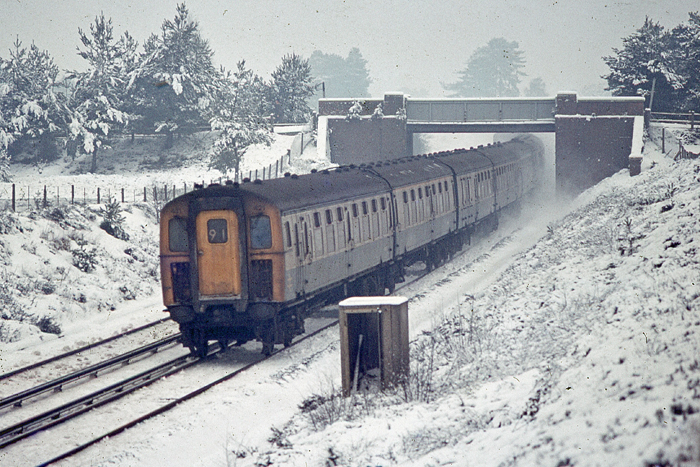 4TC No. 421 on a "fast" Bournemouth and Weymouth service once again, but a decidedly wintry scene. The train is depicted just under ½-mile south of Beaulieu Road station. The bridge carries a narrow farm track. © David Glasspool Collection 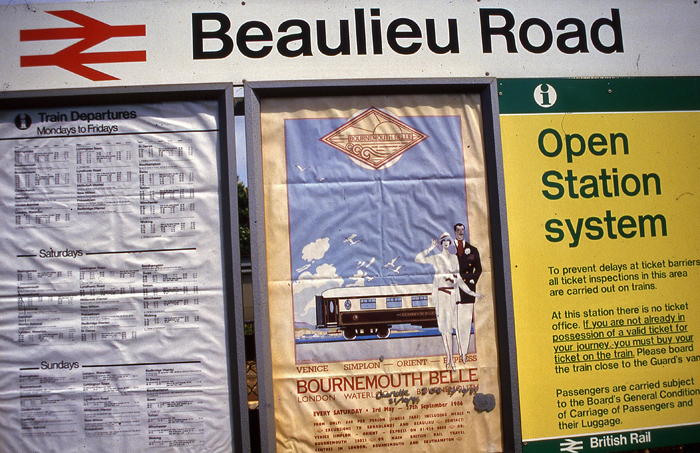 On the left is the seven-day timetable for the station, whilst the poster on the far right advertised the lack of a ticket office and the need to purchase a ticket on the train. The centre poster was promoting the VSOE Pullman service from London to Bournemouth, single fares starting at £40 per person (£115 at 2018 prices). The carriage depicted looks more like a continental Pullman car rather than one of British outline. © David Glasspool Collection 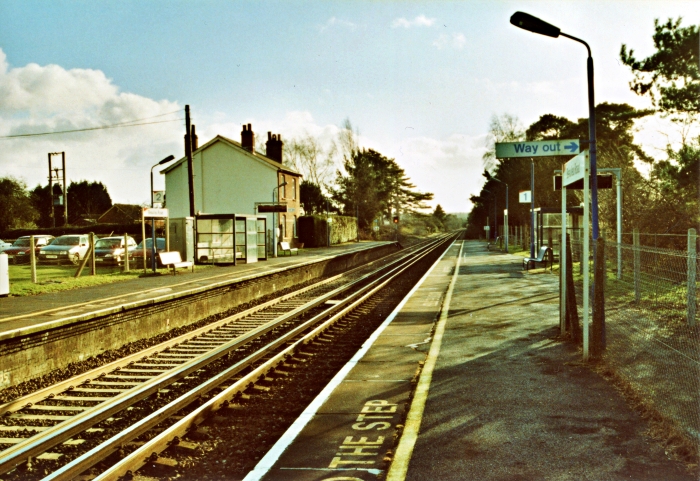 A southward view from the "up" platform shows the surviving "down" side Station Master's house, now a private residence. As for passengers, rectangular glazed shelters provided little comfort on a cold winter's night. © David Glasspool