Chatham forms a significant chapter in the history of the East Kent Railway (EKR), for it acted as the western terminus of this company’s first stretch of operational line, between the Medway Towns and Faversham. The EKR was formally born on 4th August 1853, when Royal Assent was received for the building of a 48½-mile line between Canterbury and Strood. The SER’s failure to extend its 1849-opened North Kent Line across the River Medway to Rochester and Chatham, compounded by the fact that the company’s main Dover trunk route assumed a course through the ‘’Weald of Kent’’, saw that the populations of the North Kent Coast were deprived of a vital rail connection to the Capital. Wealthy landowners of Faversham had brought this issue to the fore, instigating the formation of the EKR. Thanet had enjoyed a railway link to London since 1846, through running having commenced to Ramsgate and Margate on 13th April and 1st December of that year respectively. However, the line was circuitous, and a passenger for Margate, from London Bridge, had to endure a journey via Redhill, Tonbridge, Ashford, and Canterbury.

On 25th January 1858, the EKR commenced operation between Chatham and Faversham. At this initial stage, the company was not aiming to evolve into a direct competitor of the SER, but rather as a feeder to the latter’s North Kent Line. For two months, a horse and cart service operated between Chatham and Strood stations. Completion of a physical connection between the two networks eventually occurred in March, and EKR services began running into the SER’s station on 29th of that month. The extension of services between the two sites had involved the boring of the 428-yard-long Fort Pitt Tunnel, the formation of an elevated track bed, and the erection of a bridge over the Medway, after which the double-track line curved northwards into the SER’s platforms at Strood. Here, LC&DR carriages would be attached to the rear of SER services, and taken onwards to London. The EKR applied to Parliament for running powers over SER metals, thus enabling the company to reach the rails of the ‘’West End of London & Crystal Palace Railway’’ (WEL&CPR), in Battersea. Ultimately, the latter lead to a planned terminal area at Victoria. However, the SER countered these proposals, arguing that the North Kent Line was already at saturation point, and was unable to accommodate more services. This would be a move which the SER would later regret, for as a result of the company’s stance, the EKR received Parliamentary approval in 1858 for the building of its own line between Strood and St Mary Cray. At the latter, the metals of the independent ‘’ Mid-Kent Railway’’ would be met, and this network in turn provided access to the rails of the WEL&CPR. On 1st August 1859, the EKR was formally renamed the ‘’London Chatham & Dover Railway’’, and connections opened as follows:

Previously, in 1855, the EKR had also received Royal Assent for the extension of the original proposals, and a line beyond Canterbury, to Dover, was now on the agenda. Although the opening of the Faversham to Canterbury section of route had been slower than hoped, owning to one of the company’s earliest cash crises, through running between Victoria and Dover was eventually possible from 22nd July 1861.

Chatham was a station of some architectural note, for it was situated upon a cramped site, sandwiched within a 50-yard-long chalk cutting. The layout was flanked on either side by tunnel portals: at the London end was that of the aforementioned Fort Pitt Tunnel, whilst at the ‘’country’’ end of the station was the 297-yard-long Chatham Tunnel. Three platform faces were in evidence when through running between London Victoria and Canterbury commenced, in December 1860: one face served the ‘’down’’ line, whilst the remaining two faces formed a single island surface, positioned in-between the ‘’up’’ line and a trio of loop sidings, the latter running along the southern perimeter to the layout. A road bridge straddled all tracks, and staircases linked it with the below platform surfaces – a footbridge between platforms later came into use at the ‘’country’’ end of the layout. The main station building was positioned on the ‘’down’’ side, and its elongated shape on early maps suggests that it was built to the same design as those structures which emerged at both Canterbury C&D and Dover Priory.

In spite of the fact that the station was situated upon a highly restricted site, Chatham was host to a full range of freight and locomotive facilities, undoubtedly because of its original role as the terminus of the EKR line. A trio of wagon turntables existed at the London end of the platforms, which linked sidings either side of the running lines, and a goods shed was also in evidence. The latter was positioned on the southern fringes of the layout and, unusually, lacked a rail connection – it did, however, boast a canopy! Enough room had also been found for a three-road engine shed: this was squeezed within a tight space behind the ‘’country’’ end of the ‘’down’’ platform, and was accompanied immediately to its north by a 45-foot 5-inch turntable. A water tower was erected above the cutting, perched on the cliff face in-between Chatham Tunnel and the bridge of ‘’Maidstone Road’’. Signalling was primitive in these early years, and the station lacked not only a signal box, but also semaphore signal posts; points were controlled by adjacent levers, and trains were signalled by hand.

Shortly prior to the rationalisation of the Kent Coast Electrification Scheme. © David Glasspool 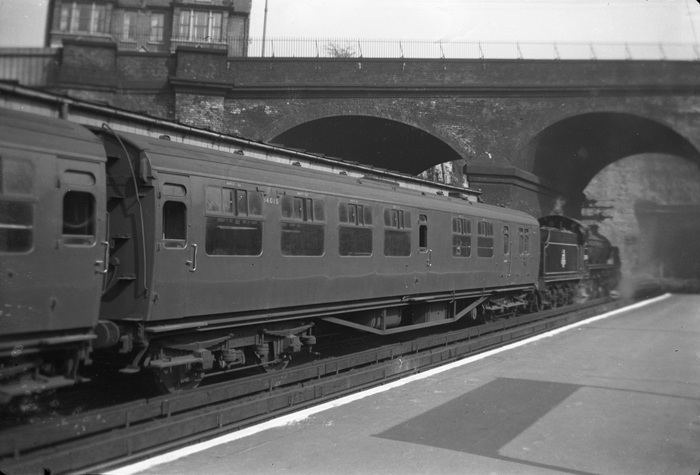 A splendidly clean ''N'' class, sporting BR's ''Early Crest'', is seen at the head of an equally tidy set of Bulleid carriages. Above the train, we can just about see the top of the canopy of platform Nos. 1 and 2. On the far right, in the background, is the 297-yard-long ''Chatham Tunnel''. The conductor rails had been in place since electrification to Gillingham in 1939. © David Glasspool Collection 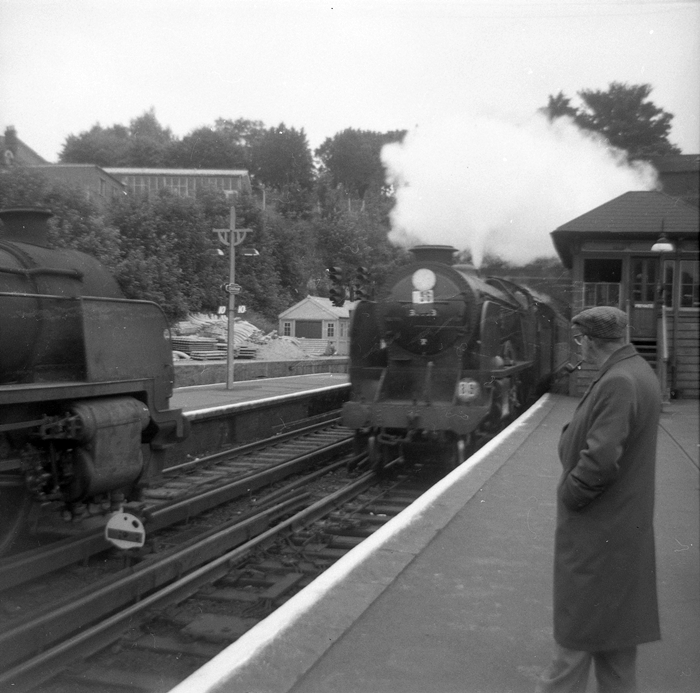 ''Schools'' Class No. 30923 ''Bradfield'' is seen passing the Saxby & Farmer signal box, fronting a Victoria to Ramsgate Express. On the left is the front of a filthy ''N'' Class 2-6-0, whilst below that engine's cylinders is a diminutive shunt signal. Of interest here are the 1954-commissioned ''searchlight'' colour signals, the concrete bracket lamp-posts with ''Sausage'' totems, and the ''10'' car train markers. New materials in the background show that electrification through to the Kent Coast, and rationalisation of the lines at Chatham, is imminent. © David Glasspool Collection