In August 1991 a full-size cab mock-up of the envisaged ''Networker'' for Kent Coast services was produced, unveiled by then Transport Minister Michael Portillo, at London Victoria. This was a purpose-design for the longer distance Kent diagrams, featuring an end gangway to allow passage between two coupled unit formations, in addition to a mixture of 2+2 and 2+3 seating, five ''perch'' seats , and two toilet cubicles. Designated ''Class 471'', the four-car unit was envisaged to initially augment, and then in time replace, the 4 Cep fleet on the South Eastern Division as part of the trend of replacing slam-door stock in the area. It also sought to modernise Kent Coast travel. In retrospect, the mock-up resembled a cross between a Wessex Electric and a Class 465, having the gangway connections of the former, but the sliding door arrangement of the latter, and initial orders for the type were to be placed in early 1992, with the first deliveries envisaged for late 1993.

General procurement of new stock for the ''Networker'' programme was somewhat slow, with long periods of time between deliveries, thus the Class 471 project was extensively revised to speed up the production of replacement stock, especially with impending privatisation. It had been voiced within the Commons in 1992 by MPs of Kent that the county's coastal routes had the worst rail services in the United Kingdom. Blame was not put at the foot of British Rail, rather the lack of Government investment in new rolling stock. The Class 471 had been promised for a 1993 delivery to Kent Coast lines; by 1992, evidently this project was going nowhere, hence a replacement scheme was required. The solution devised returned to the fundamentals of the Class 465 fleet – developed for inner suburban workings – with ABB (formerly BREL) modifying an existing Class 465 to demonstrate the type's suitability for long distance services. The Treasury allowed British Rail to secure £150 million for the procurement of forty dual-voltage four-vehicle EMUs, sixteen of which were destined for the South Eastern Division. The remaining twenty-four were bound for the former Eastern Region, for use on Kings Cross to Cambridge workings. This formed the last allocation of money for the ''Networker'' project of the 1990s, which had an eventual budget of £800 million. The small number of units for Kent services revealed that the existing slam-door fleet could be augmented, but by no means replaced by any significant degree. Politically, however, this ''stop-gap'' programme was advantageous: it allowed York works to remain open for a number of months longer, whilst also giving a continuous flow of new stock.

Network SouthEast liaised closely with ABB during the design of the internal layout, which finally materialised into 2 + 2 low-density Standard Class seating, with a First Class compartment of 2 + 1 seating. The aforementioned dual-voltage system was a specification ''must'' from the outset, which would allow future leasing companies flexibility with stock operating over various railway systems. The South Eastern Division batch would feature a third rail D.C. collecting shoe in place of the A.C. pantograph of the Eastern Region units, but both batches would incorporate all the necessary electronics for the ease of transfer between networks. Both batches were designated ''Class 365'' and building got underway in 1994, with the first unit available for testing by April 1995. The first service using the type on the South Eastern Division did not occur until 14th October 1996, by which time Network SouthEast had disbanded and the services were run by franchise holder ''Connex South Eastern''. Normal operational service of the type was scheduled for the Summer 1997 timetable: this indeed occurred, but the units were already proving troublesome. The Class 365 began to demonstrate that its fundamental design – derived from suburban units – was not suitable for ''express'' use, as the type encountered severe vibration problems at speed as a result of deficiencies with traction motor mounting. All units were quickly limited to a top speed of 80 MPH until a remedy was sought. These troubles were augmented by the delay of the class receiving clearance by ''Railtrack'' to proceed along the whole of the ''Chatham'' main line: initially, clearance had only been granted from Victoria to Ramsgate, via Maidstone East, Ashford, and Canterbury West.

The fleet was completed in unbranded Network SouthEast livery (applied in the form of two-pack paint), although Connex announced at the time that the units would be delivered in the new franchise colours. The company ordered a quantity of vinyl layers which would be used to paste over the NSE colours; the surplus layers (presumably part of a minimum-order production run) appear to have been used on a number of Class 465 units thereafter. Delivery of the first Class 375 ''Electrostar'' unit occurred in 1999, destined to replace the slam-door fleet, and with the demise of Connex in December 2003, coupled with the possibility of cascading existing Class 465 units onto the ''Chatham'' line (in light of the procurement of new ''Metro'' units for the North Kent Line), the Class 365s' days were numbered on the South Eastern Division. The mass exodus of units began in March 2004, under the guidance of ''South Eastern Trains'', with vehicles being delivered from Ramsgate to Hornsey, on the Eastern Region, to join their counterparts already there. The units were transferred one vehicle at a time by road. 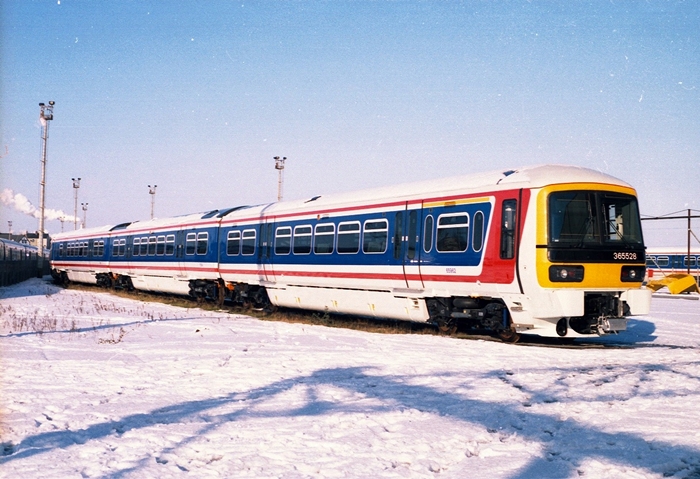 Brand new, No. 365528 is seen in the snowy environs of ABB York. The first class compartment is marked by the yellow stripe above the first three passenger windows. This particular unit was one of twenty-four allocated to Kings Cross to Cambridge workings from the outset. © David Glasspool Collection 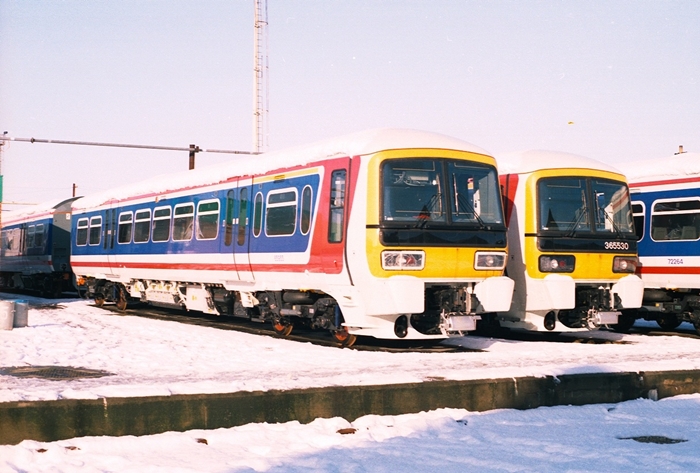 Side-by-side in the snow at ABB York are unit Nos. 365521 and 365530. On the extreme right can just be seen a trailer belonging to No. 365513, the only unit of the three pictured here to go to the South Eastern Division. © David Glasspool Collection