In 1946, two years before Nationalisation, the Southern Railway had begun putting forward proposals to electrify the majority of steam-worked lines in Kent and East Sussex, particularly the major trunk routes from its London termini. The 1948 formation of British Railways killed off a number of proposals made by the hitherto Grouping companies, but the SR's electrification plans re-emerged in the British Transport Commission's ''Modernisation Plan'' of 1955. This was in the form of the ''Kent Coast Electrification Scheme'', approval for which was given in February 1956 at a total cost of £45,000,000 (1956 prices): the ''Chatham'' line would be the first candidate, followed by that via Tonbridge and Ashford three years later. Integrated within the scheme was the building of brand new electric multiple units to take over from steam when the ''juice'' was turned on. In 1956, Eastleigh Works produced six prototype four-coach EMU units demonstrating the standard BR Mk 1 coach design, incorporating much of the electrical composition of the Class 415 / 416 (2 / 4 EPB before TOPS) suburban EMUs. The prototypes were initially employed on the South Central Division, the ''Brighton'' line having previously been electrified by the SR in 1932. The ''Chatham'' line became ''live'' in June 1959, the Tonbridge and Ashford route following in 1962; most of the remaining 127 EMUs built after the prototypes at Eastleigh up until 1963, were subsequently deployed on these lines. A small batch was cascaded to the South Western Division for use on the Portsmouth line, where pre-Nationalisation EMUs could be phased out. Units were designated by acronyms ''4 Cep'' and ''4 Bep'': 4 = number of vehicles; C = Corridor layout; B = Buffet in formation; EP = Electro-Pneumatic.

4 Bep / Cep units were fitted with standard BR Mk 1 quarter-light windows from the outset and were formed as follows:

In 1975 a ''mid-life'' refurbishment programme was mooted to extend the 4 Cep / Bep fleet's useful life to at least fifteen more years, if not twenty, finance not being available at the time for the procurement of new stock. The first unit, No. 7153, was despatched to Eastleigh in 1975 for British Rail Engineering Limited (BREL) to undertake a test run refurbishment, this proving to be a success. It would be until 1979, however, that mainstream refurbishment of the fleet would begin, interestingly at Swindon on the Western Region, where units had to be diesel-hauled. The refurbishment was not helped by a number of arson attacks during 1980 on stock waiting to be modified, consequently seeing units reformed in a seemingly random order, depending on which examples were finished first. During refurbishment, the traditional BR Mk 1 quarter-light windows were replaced with hopper ventilator equivalents (the prototype had kept the quarter-lights), a revised driver's control desk installed, and seats were replaced (these proving more uncomfortable for some passengers). The Trailer Second Corridor (TSK) was rebuilt into a Trailer Second with open plan seating, whilst the Trailer Composite Corridor (TCK) was rebuilt with a guard's compartment (reducing the number of separate compartments by three), being re-designating as a Trailer Brake Composite (TBC). The addition of the guard's compartment in the original TCK vehicle allowed for the guard's area immediately behind the driving cabs to be replaced by more second class seating, in an open-plan layout, thus re-designating the area as a Driving Motor Standard Open (DMSO) . Of the twenty-two 4 Beps which went to Swindon, the majority lost their Trailer Restaurant Buffets (TRB) and were rebuilt as 4 Ceps - some were scrapped as a result of arson attacks and spare parts salvaged or whole trailers retained in reserve. In review, only six out of the original twenty-two 4 Bep units were refurbished with their buffet carriages still intact. The refurbishment programme resulted in the class having a reduced body weight and replacement trailer bogie sets were salvaged off former locomotive-hauled Mk 1 stock.

In later years on the South Eastern Division, 4 Ceps were not just confined to the main lines; they became regulars on the Strood to Maidstone West / Paddock Wood and Sittingbourne to Sheerness-on-Sea shuttle services - certainly a treat having main line stock on branch line workings! The type were no stranger to the North Kent Line (synonymous with commuter services) either, a number of Summer special workings using the route as an alternative over the years and as a diversion from engineering works on the ''Chatham'' line. The class also had a spell on the Hayes branch, in place of Class 465 / 466 ''Networkers'', which were still awaiting acceptance into service (EPB units had since gone for scrap). With the successful deployment of the final suburban ''Networkers'' by the end of 1995 and the introduction of sixteen Class 365 units on Kent Coast services, a number of 4 Cep units were withdrawn and put into storage. Withdrawal was exacerbated by ex-Merseyrail Class 508s arriving on the aforementioned Paddock Wood and Sheerness shuttles from 3rd August 1998, but this was not the end for the Ceps on the South Eastern. With the Class 508s returning a very poor availability rate, three additional 4 Cep units (1701, 1742 and 1748) were drafted in from the South Central Division to cover.

Network SouthEast had previously converted eight 4 Cep units to 3 Ceps by removal of a trailer second, but the whole batch was scrapped by then new franchise holder ''Connex'' on the basis of the units being ''non-standard'' stock. The 3 Cep policy was seemingly reversed by the operator in November 1998, however, when a scheme to reduce fifteen 4 Cep units to 3 Ceps got underway. This was done in conjunction with power supply upgrades on the ''Chatham'' line in preparation for replacement Class 375 units: with one less trailer, the units would be able to maintain 100 MPH, at least on sections of line between Chatham and Ramsgate. 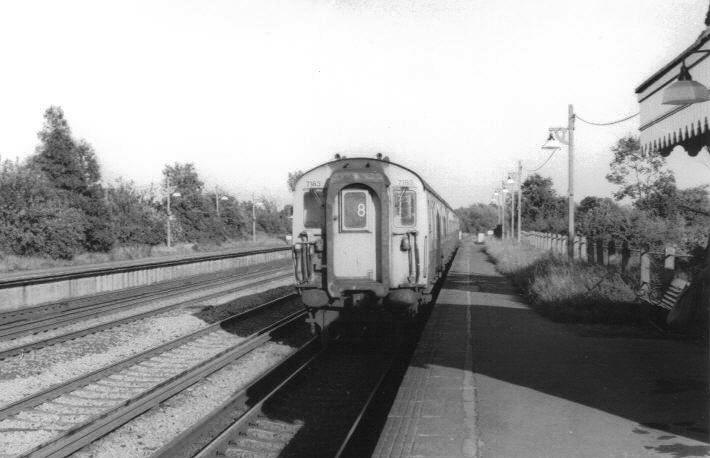 Tom Burnham has very kindly submitted this picture for inclusion in the section. Unrefurbished 4 Cep No. 7183

is seen trundling into Headcorn on 16th September 1978 with an Ashford to Charing Cross service via Orpington.

The unit was renumbered to 1584 when refurbished. Today, Headcorn is an all-modern station, which makes this

picture all the more interesting. Note the the edge of the SR-styled canopy valance on the right and the Southern 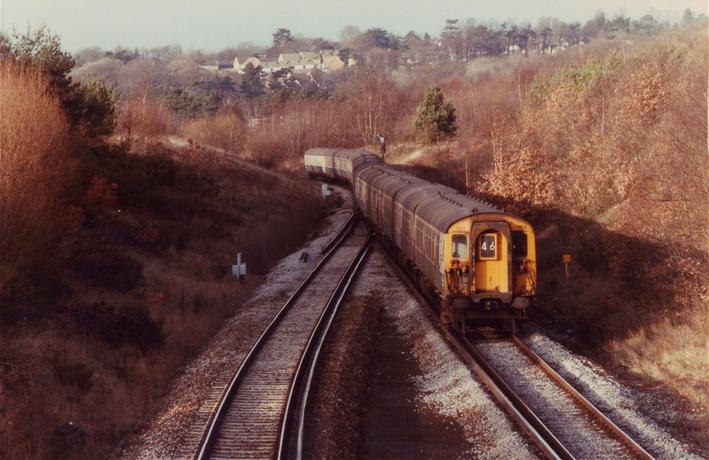 In early 1984, 4 CEP No. 1514 is observed leading a thirteen coach Victoria to Dover boat train, as it approaches

Petts Wood Junction to continue its journey via the ex-SER main line via Tonbridge. Trailing at the rear is a Motor

Luggage Van (MLV), which provided additional luggage space for workings to the Channel Ports. For those sections

of non-electrified lines, the MLV was equipped with batteries, allowing it to work away from the third rail for a limited 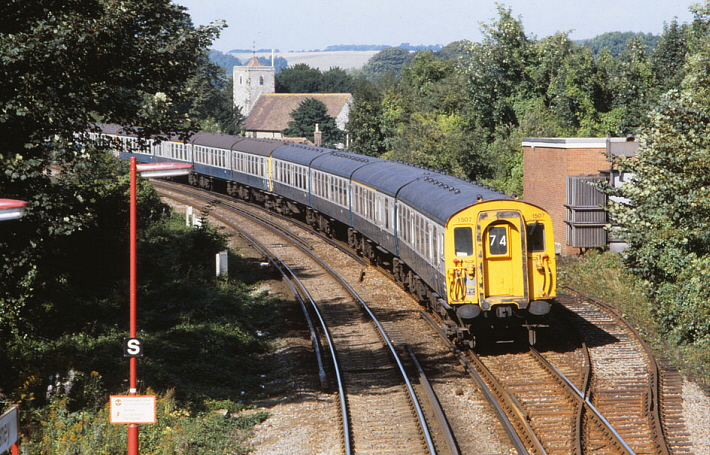 A 12 CEP formation, led by No. 1507, is seen approaching Kearsney, on a Victoria to Dover service. The siding

to the right of the unit was used for stabling coal traffic from the Kent Collieries until 1986. Chris 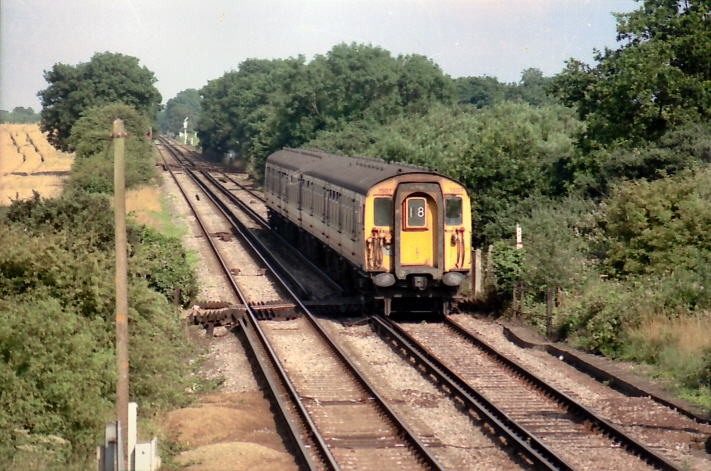 On a splendid Summer's day in August 1989, 4 Cep No. 1507 is again observed, but this time approaching Minster

from the east, forming a Ramsgate to Charing Cross service. It was in the following November that Minster's