From 1970 onwards, the 1923-established Foster Yeoman stone and aggregate company had made use of rail to transport heavy loads from its quarries to its customers. 1970 marked the opening of a rail stone terminal at Merehead Quarry in Cranmore, Somerset, whilst a further three years down the line, another rail site was developed at Botley in Hampshire. Much of the quarry traffic was handled by Class 52 diesel-hydraulics on the Western Region Lines, with Class 47s monopolising such workings after the former's withdrawal from service in 1977. Locomotive reliability was steadily worsening over ensuing years, and with more aggregate trains running behind schedule, a concerned Foster Yeoman turned to British Rail to negotiate an arrangement for provision of more reliable traction. By mid-1983, a British Rail response to the somewhat perturbed private operator materialised, with sixteen Class 56s emerging as prime motive power to handle quarry traffic. The pool of locomotives were allocated to Westbury, but their existence in the aggregate role was to be short-lived, as reliability of the locomotives (which had originally been developed for merry-go-round coal workings) had hit an all time low, with only two thirds of Foster Yeoman's traffic arriving at locations on time.

Foster Yeoman had gained valuable experience from operating its own fleet of exclusive wagons since the dawn of the 1980s and this, with the compounded failure by BR to provide reliable traction, urged the company on to employ a similar regime of using a privately-owned locomotive fleet. By 1984 the company was in discussions with BR on the feasibility of being permitted to operate their own locomotive pool, although it was clear that the nationalised industry was determined to keep a hold on the valuable quarry traffic to prevent a decline in their freight operations. A compromise was eventually reached which allowed brand new traction to be drafted in on the condition that all locomotives were maintained by BR and the aggregate company employed BR drivers. Throughout the bulk of 1984, Foster Yeoman offered tenders to potential companies for the construction of a diesel-electric with an unprecedented high reliability rate of 95%. British Rail Engineering Limited, Brush Traction and the General Electric Company (of which English Electric was now part of) considered themselves out of the race for the contract, all three companies admitting that they could not guarantee producing motive power with such a high availability rate. Eventually, the American motor company giant General Motors prevailed and was able to offer Foster Yeoman a locomotive which met the given requirements. An order for five diesel locomotives (later to become ''Class 59'') was placed by Foster Yeoman between 1984 and 1988, the first examples arriving from the USA at Southampton West Docks on 21st January 1986.

The first of the class on the South Eastern Division came in the 59/1 variant. These were a batch of four locomotives produced for Mendips-based ARC, another aggregate freight operator, and delivered to Britain from Ontario in Canada in October 1990. These were regulars on the once daily Allington (Maidstone) to Stoke Gifford empty aggregate hoppers, a service which still runs today, although is now re-marshalled at Hither Green. The ARC operation was subsequently taken over by quarry owners ''Hanson'' (the company of which operated the nearby gravel works at Cliffe) in January 1999, and since then the original Class 59/0 imports have frequented the Allington diagrams, such traction being ''borrowed'' from Foster Yeoman.

The third and final derivative was that of the 59/2, identical to its 59/0 and 59/1 counterparts, but ordered by National Power to become a fleet of six privately-owned locomotives to haul heavy coal trains between the company's power stations. The first was delivered from Canada in 1993 and after a successful entry into service, was followed by a further five locomotives between 1994 and 1995. These remained with their original owners only until 1998, when all six were sold outright after privatisation to EWS on 1st April of that year - it is with the latter that their South Eastern Division interest begins. The diesels, Nos. 59201 - 59206, were repainted into the now common red and yellow colours and subsequently transferred south to Hither Green, where they were diagrammed on aggregate workings in the area. The 59/0s and 59/1s remained on the Allington to Hither Green / Stoke Gifford empty hoppers, but those diagrams to and from the gravel terminal at Cliffe were soon monopolised by 59/2s (despite being Class 66-scheduled on paper), and indeed this remains the present situation. The Class 59/2s themselves have since transferred north of the river to Temple Mills, but their operating patterns on North Kent Line aggregate workings remain unchanged; these diagrams can sometimes be matched in frequency by the type's light engine movements along the route. 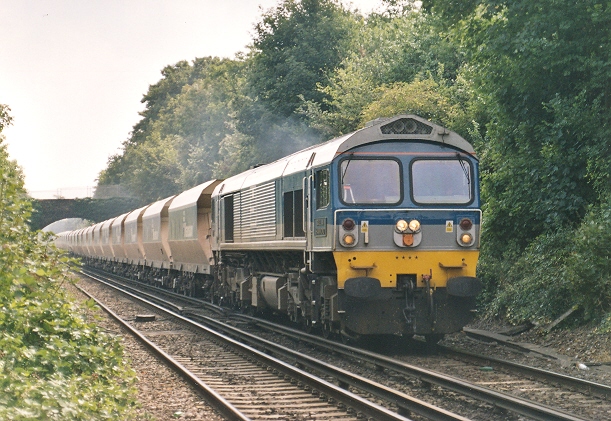 Making an impressive sight as it hauls the 08:50 Allington to Hither Green empty ''Hanson''

hopper working, but not running at its top speed of 60 MPH, No. 59004 is seen approaching

Kent Line each week day, but at least it breaks the EWS and Freightliner monotony. David Glasspool 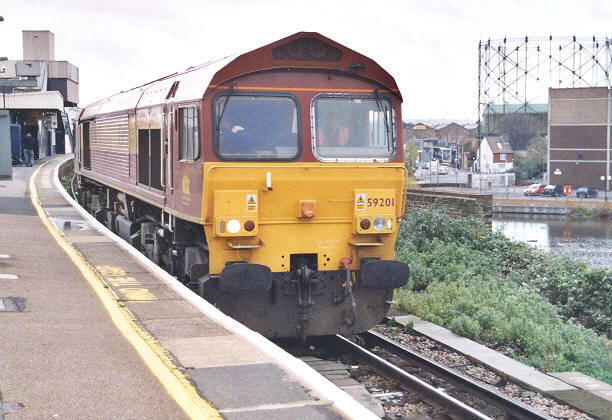 No. 59201 was the first Class 59/2 to be repainted from National Power blue to EWS green, being

unveiled in the latter's colours on 17th June 1998. The locomotive is seen trundling light engine

through Dartford, Cliffe Gravel Works-bound on 10th November 2004. It is interesting to note the

all yellow light clusters and what appears to be a replacement window frame on the driver's side. 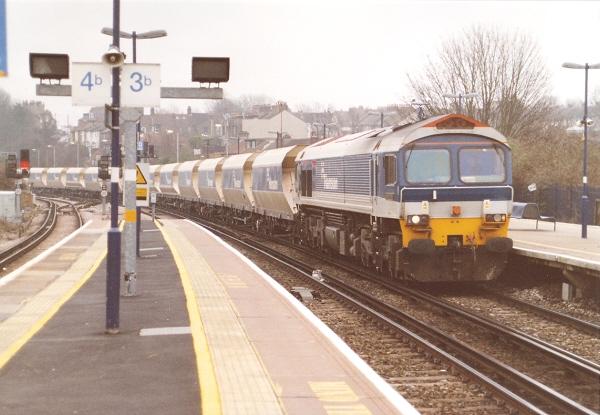 08:50 Allington to Hither Green empty ''Hanson'' hoppers. It is interesting to note the alternate