British Rail's response to the American-imported Foster Yeoman Class 59s was the development of a brand new powerful diesel-electric locomotive. By this time the nationalised organisation had been split up into its various sub-sectors and until the debut of the Class 59 in 1986, the common motive power for the freight commodities was mostly of 1960s origin, although this fleet had been bolstered by the somewhat cantankerous introduction of the Class 56, then latterly the Class 58. Although the earliest examples of the Class 56 dated from 1976, these locomotives were suffering from appalling reliability, leaving the freight haulage sectors with a very poor level of motive power availability. The coming of the Class 59 stimulated the need for a new diesel locomotive for British Rail's TrainLoad Sectors and this would herald the beginning of a renaissance in freight haulage - or at least should have. The contract for the construction of what became one-hundred Class 60 locomotives - worth £120 million - was awarded to Brush Traction Ltd in 1988; this was one of three initial bids British Rail received for the project. The comparatively small production line deterred interest from foreign contractors.

Body shells came from Wakefield and the engines from Stockport, all for final assembly at Loughborough, with the first locomotive being delivered to Derby for testing on 30th June 1989. Locomotive testing revealed a whole host of mechanical faults which would set back entry into service by several months - this did not look good against the trouble-free commissioning of the contemporary Class 59s. However, examples did begin to appear on the South Eastern Division in 1990, a few locomotives arriving at Hither Green for the TrainLoad Construction sector as the phasing out of Class 33s began on heavy mineral trains. Hitherto, the native Type 3s were not powerful enough to handle such trains single-handedly, thus were required to double-head. In comparison, the loads which required two Class 33s could be handled by a single Class 60, thus allowing more reliable workings which were cheaper to operate. Despite this obvious advantage, the Class 60's presence on the South Eastern Division has been somewhat erratic, with a number of the early Hither Green allocations being changed before locomotives arrived at the depot: those which had been delivered in 1990 were subsequently transferred to the Midlands and North East. As a result, these were substituted in October 1990 by a batch of eight Class 56s transferring south to work alongside Class 33s on TrainLoad Construction sector diagrams, which at the time included additional workings to and from Chatham Dockyard, during the contaminated soil excavation.

Five Class 60s were finally given Hither Green allocation in 1991 after becoming available to haul aggregate workings on the South Eastern Division. After July 1993, the TrainLoad Construction sector's allocation of Class 33s more or less evaporated, but many of these locomotives were later deployed with the Civil Mechanical & Electrical Engineers' Department, thus remained on site in this capacity until the very end of December 1998. Whilst aggregate workings were the Class 60s' raison d'etre on the North Kent Line, such diagrams were not exclusively of that haulage, and interesting re-allocations of stock shortly after privatisation saw a number of these freights taken over by Class 31s, Class 37s, and then latterly, Class 58s, allowing the Mirrlees-engined locomotives to be redeployed. The Class 60s, however, were still regulars on the Cliffe to Purley aggregate, but had never dominated it like their Class 33 predecessors. Plus, their existence on North Kent aggregate did not look bright with the takeover of the six-strong Class 59/2 National Power fleet by EWS on 1st April 1998. All six Class 59s were given Hither Green allocation in 2001, becoming increasingly common over the Class 60s; their arrival on the district also allowed the retiring of the Class 31s and 58s. By 2004, the Class 60s were still, however, much in evidence once again, but the following year the fleet were dealt yet another blow by a number of locomotives going into store as examples became due for expensive overhauls, in addition to EWS striving for a totally standardised General Motors fleet. This was later alleviated by the redeployment of stored locomotives, although their presence on the South Eastern Division has ''officially'' disappeared on scheduled freights, where Classes 59s and 66s are now listed do the honours. Nevertheless, they are still appearing from time to time! 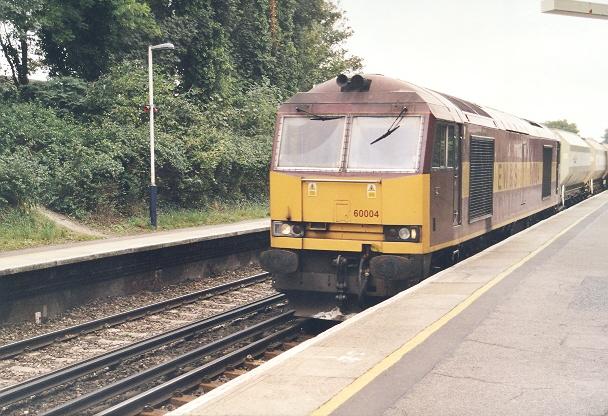 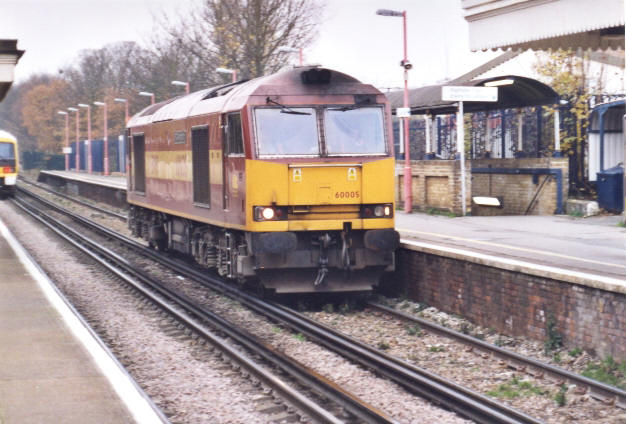 No. 60005 was seen running light engine through Bexley on 1st December 2004, bound for Hoo 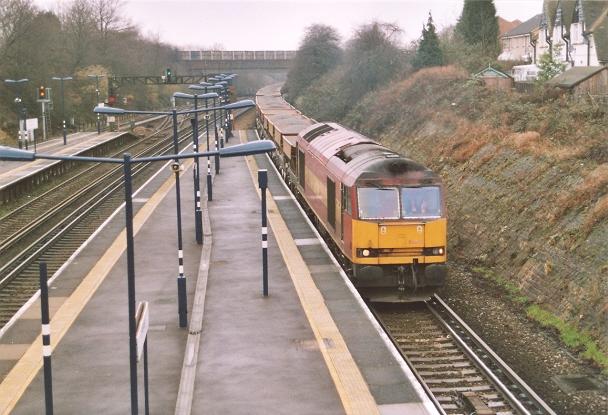