In 1994, significant reorganisation of British Rail took place as the government prepared it for privatisation. Infrastructure was placed under the control of a new entity called "Railtrack", whilst the passenger and freight train operations were organised into shadow franchises, for which private companies would bid to run. Typically, an attractive bid was seen by the government as one which required the lowest level of subsidy and included commitments to procure new rolling stock during the tenure of the franchise. What this approach did risk, however, was over ambitious bidding. Motive power and rolling stock was formally segregated amongst new BR Board-owned "rolling stock companies" (ROSCOs) on 1st April 1994, sale of these subsidiaries to private bidders commencing in the following year. It was proposed that these companies would lease the rolling stock to the franchises.

The area which was formerly considered BR's "South Eastern Division", essentially encompassing those lines within Kent which fed into the London termini of Victoria, Charing Cross, Cannon Street, and Blackfriars, was packaged as a single franchise. Part of Network SouthEast until that time, it became the ninth franchise to be awarded by the government, French-owned "Connex Transportation" winning the bidding process on 21st August 1996 to operate this for a period of fifteen years. A holding company called "Connex Transport UK Ltd" was set-up to manage the franchise and in its bid the firm had promised a series of service improvements, drastic subsidy reduction, and a rolling stock replacement programme. The franchise commenced on 13th October 1996.

South Eastern Division rolling stock improvements had started under Network SouthEast through the introduction of the "Networker" family of electric multiple units on suburban lines, namely Classes 465 and 466. This had been followed by the order of an "Express" version of the type, latterly designated Class 365, which was intended for the longer diagrams, such as those to the Kent Coast. Sixteen of these units were allocated to what became the "Connex South Eastern" franchise, the first examples entering service on 14th October 1996. Indeed, whilst these trains could complement the existing long-distance Kent Coast fleet, units of which dated back as far as the Kent Coast Electrification Scheme of 1959 to 1962, they were by no means a replacement.

As early as 1997, Connex South Eastern put out to tender the construction of 120 new EMU vehicles, which would replace the existing Class 411 CEP fleet built to the Mk 1 coach profile. The contract was awarded to "Adtranz" on 16th July 1997, the same company of which built the Class 365 fleet in York. Construction this time was to take place at Derby Litchurch Lane and Connex's initial projections outlined the year 2000 for the first new units to come into service. These would be formed into 30 four-vehicle formations, capable of operating on 750V D.C. third rail, with each separate train unit extracting a maximum current of 2,250 amps at any given time. It was agreed with the manufacturer that the level of electrical current should be capable of being varied to suit alternate lengths of trains. Furthermore, in the newly privatised environment, where stock movements between franchises were likely, the units would also have the necessary provision to accommodate AC electric equipment to take power from overhead wires at a future stage. The fleet was destined to become one of the first of a new standardised production line of trains which could be used on multiple routes if required, not just limited to the area of the original franchise for which they were ordered.

The vehicles' body shells, formed of separately maufacturered side and roof components, were of mostly aluminium construction with steel ends, and the traction motors for the fleet were manufactured by the ABB Group at a plant in Vasteras, Sweden. Finance for all 120 vehicles was provided by HSBC-owned "Eversholt Rail", purchase from Adtranz being completed on 2nd July 1998 at a cost of £100,000,000. This was followed on 4th September of the same year by Connex placing another order, this time for 90 vehicles, to be formed into a total of 30 three-car EMUs. This batch was seen as a replacement for the existing 4-CIG EMU fleet; the latter were not native to the South Eastern Divison, most of those which were transferred to Ramsgate coming from Brighton and Eastleigh in 1991 and 1993 respectivley. 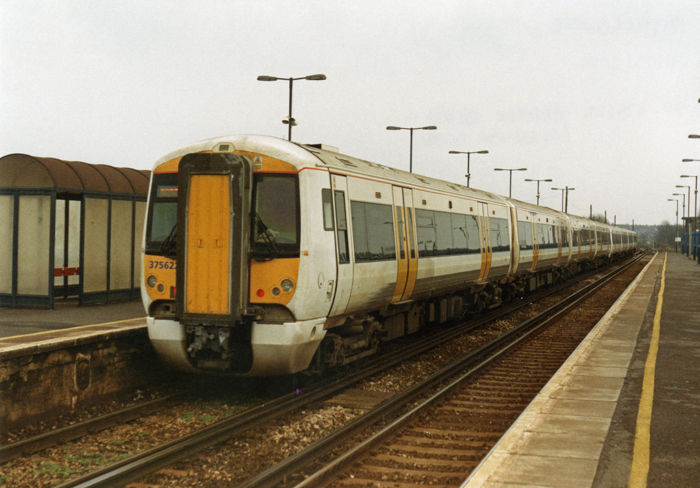 A somehwat grubby unbranded No. 375622 is seen forming the rear portion of an eight-car service at Sittingbourne, Faversham-bound. Below the driver's window was formerly "Connex" branding, this being swiftly removed after termination of the franchise. This area was eventually filled with a duplication of the unit number. © David Glasspool 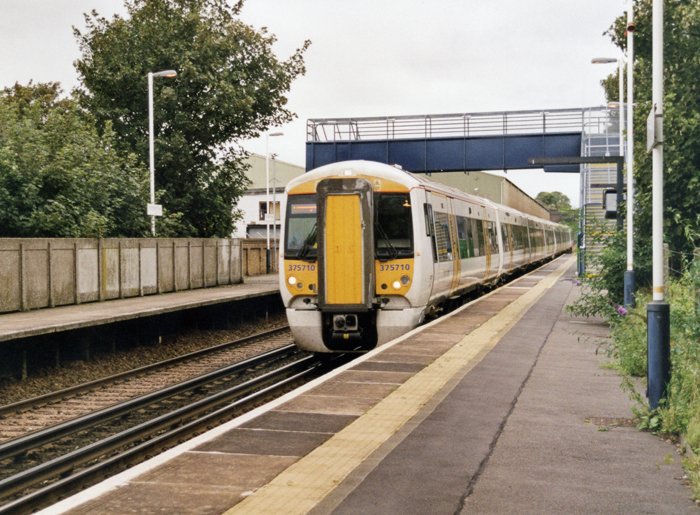 No. 375710 is seen at Farningham Road with a stopping service to Faversham. Farningham Road retains its original station building, although the austere modern footbridge seen above the unit is a result of a road/rail vehicle crane demolishing the original structure. Temporary scaffolding was initially put in place, until the present day structure was completed. © David Glasspool 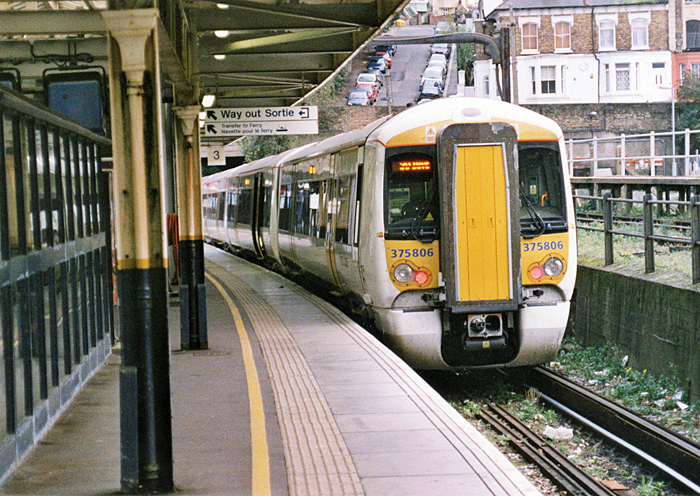 No. 375806 is seen at platform 3 of Dover Priory, showing the unit number below both cab windows. These units use twice the amount of electrical current compared to their Mk 1 predecessors. The cost of infrastructure upgrade for the new fleet was estimated at £100 million. Since the units were being delivered faster than the progression of upgrade work, they were put into secure storage at Ministry of Defence locations. © David Glasspool