The new units became "Class 375" under the TOPS numbering system and acquired the brand name "Electrostar". The first units, Nos. 375001 and 375002, were put on display to the press at Derby in early 1999. In April of that year, they were subsequently dragged to Adtranz's depot at Chart Leacon, Ashford, to embark on an intensive testing programme before acceptance into service. In testing, the first four units delivered were required to cover 200,000 miles, with a maximum of three faults over the distance before being commissioned by Connex South Eastern. Subsequent units were required to cover just 1,000 miles with no faults before acceptance. All of the new trains were to be maintained at Chart Leacon under a joint venture between Adtranz and Connex.

One of the new units was put on public display at Brighton on 18th April 2000, and the first Electrostars were scheduled to enter service with Connex South Eastern in the followiing October, but delays put this back to the next year. Regular deployment came in the summer 2001 timetable between Victoria and Ramsgate.

The class featured regenerative braking, which meant that when slowing down, the units' wheels powered the train's electric motors, as opposed to the motors powering the wheels. Therefore, electricity would be generated and returned to the grid, rather than used. Anti-scratch film was placed over the windows, much of the existing stock, particularly on the suburban lines, having been badly vandalised through this method. CCTV was installed throughout and vehicles comprised a mixture of 2+2 seating arranged around tables and in "airline" mode. Button-operated double sliding plug doors were incorporated down the bodysides and interestingly, no First Class accommodation was provided. The latter was soon compensated for by the creation of "Club Class" seating sections in those areas of the driving vehicles immediately behind the cab. Both intermediate vehicles of 4-car units were equipped with a toilet, whilst one was present in the centre vehicle of the three-car version. Top operating speed was 100 MPH. Thirty units were fitted with both third rail collecting shoes and pantographs, these being designated 375/6 - remaining units had provision for future installation of overhead gear.

Connex Transportation also operated the adjacent "South Central" franchise, having been awarded this on 12th April 1996. This formally commenced on 28th May of the same year and was originally for a tenure of seven years. The area covered for this operation was essentially the former BR Central Division, encompassing those lines radiating out of Brighton and serving termini at Victoria and London Bridge. In conjunction with the rolling stock renewal exercise on the South Eastern operation, new vehicles were also destined for the South Central franchise, 240 Class 375 carriages being ordered in August 2001. In March of the following year, Connex was replaced as holder of the South Central franchise by the "Govia Group", and in the same month the new operator placed an order for another 460 Class 375 vehicles. Delivery of these was scheduled to commence in April 2004 and each vehicle was priced at £815,000, Portabrook Leasing providing the finance. 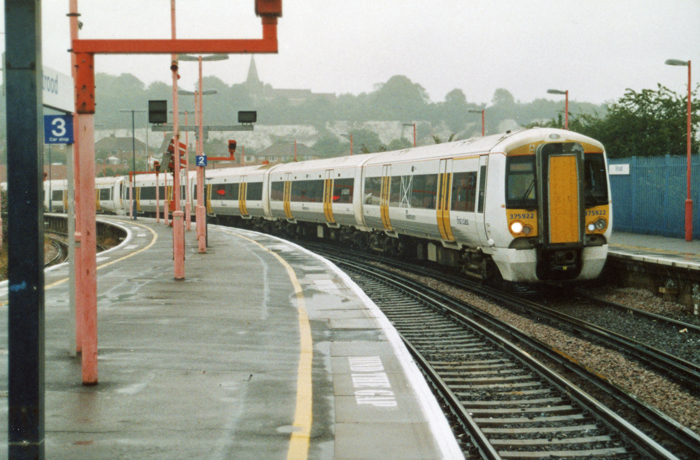 No. 375922, showing signs of a defective window, paired with No. 375601 on an empty stock working via the North Kent Line. The units are seen rounding the curve into Strood, prior to taking the connecting spur to the ''Chatham'' main line. © David Glasspool 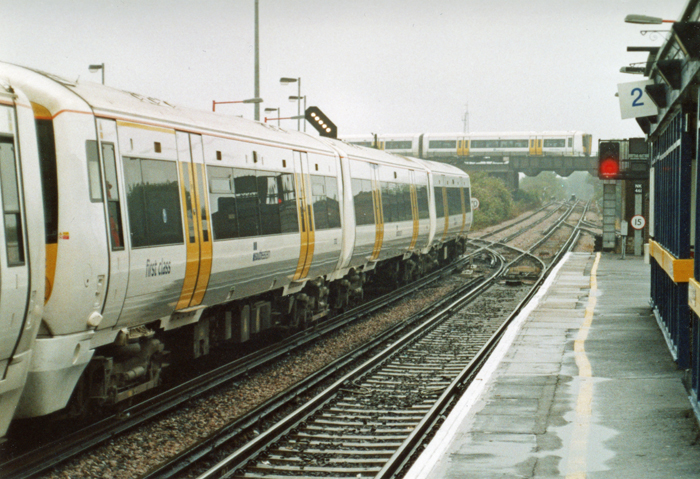 The leading vehicle of No. 375922 had just ventured onto the connecting loop at Strood, when a London-bound train of the same class crossed the flyover south of the station, Victoria-bound. The flyover carries the double-track "Chatham" line across the Medway Valley Line. © David Glasspool 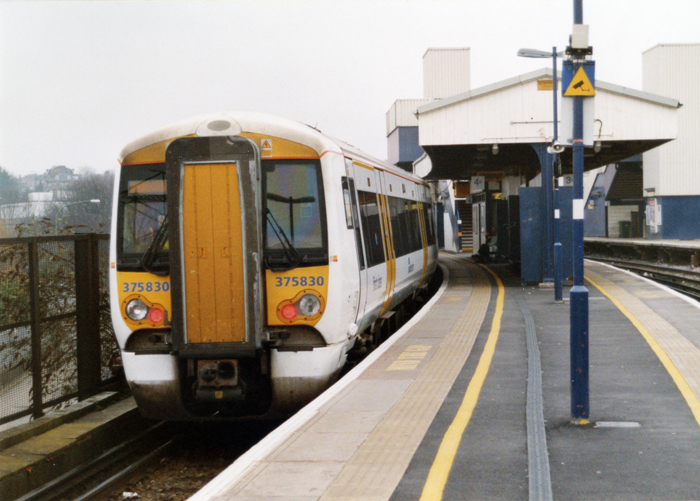 No. 375830 is seen heading eastwards through Dartford's platform 4, empty stock. The North Kent Line is regularly used for such movements and "main line" stock can occasionally be seen at stabled at Slade Green Depot overnight. © David Glasspool