One of the Medway Valley Line's many architecturally unique stations, Cuxton opened with the northern half of the route between Maidstone (SER) and Strood on 18th June 1856. As recounted in this website's Snodland section, the stations along this line do not appear to conform to any fixed design or pattern and indeed, the basic model at Cuxton cannot be found at any other Medway Valley station. From the outset, the line was double-track, thus two platforms were provided either side. Aylesford and Snodland were provided with proper goods facilities, but interestingly Cuxton never boasted these, merely just having a single siding trailing off the ''up'' line. The main station building here was mock Tudor, the only other stop along the route conforming to this style being Wateringbury, but Cuxton's 1858-built structure was far less substantial. Despite this, tall chimney stacks of a hexagonal cross-section were still features of the building, in addition to red brick and stone window surrounds. However, there was at least some commonality with numerous other stations: waiting facilities on the down side consisted of a single timber shelter of standard design, but when built it did not have any form of canopy valance. A second, much smaller timber structure also appeared on the ''down'' platform, to the north of the existing waiting shelter, but this was for the issuing of tickets - this was certainly an unusual feature at such a small station. An SER-designed clapboard signal box with sash windows appeared on the ''down'' side in 1892, immediately to the south of the level crossing, but the waiting shelter did not receive a canopy valance until early the next century, under SE&CR ownership.

In 1931 a single siding opened for the British Basket and Besto Works, trailing off the ''down'' line, approximately 230 yards to the south west of the level crossing; this terminated just short of Cuxton signal box. In the same decade the Southern Railway rebuilt the station platform sides with the then customary prefabricated concrete. Electric services through the station commenced on 2nd July 1939 with the extension of third rail from Gravesend Central to Maidstone West, but just a track-level foot crossing was still provided between the two platforms. In conjunction with the 1939 works, an ''up'' goods loop was installed to the north of the platforms. A footbridge was eventually installed in 1961 in conjunction with the electrification of the southern end of the Medway Valley Line, electric services commencing on 12th June of that year. A concrete footbridge had been erected at Wateringbury, but interestingly both Cuxton and New Hythe received pressed-steel structures. Despite this difference, neither design was of any architectural beauty! Seven days before electrification, the station's only goods siding on the ''up'' side was taken out of use, but an electrified freight loop later appeared on this side. This itself was decommissioned in about 1990, followed in 1991 by the removal of the delightful timber waiting shelter - it is a great shame that historic structures such as this were still being obliterated this late on. Standard metal-post electric lamps had appeared at Cuxton during the 1970s, but what the station did retain, as did its other counterparts along the line (bar Maidstone West), were semaphore signals and its mechanical signal cabin. The former have only recently succumbed to colour aspect lights, being replaced in October 2005, but the signal box remains, albeit with a switch panel in place of the mechanical levers. 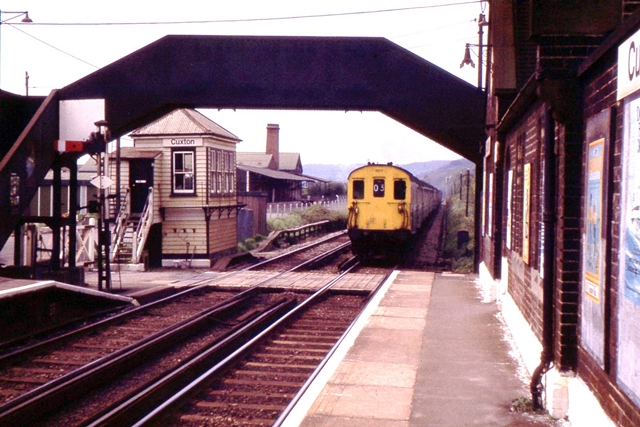 ''Hastings'' DEMU No. 1017 is seen leading a second unit of the class through Cuxton, forming the 09:10 empty stock from St Leonards to Dartford. © Roger Goodrum 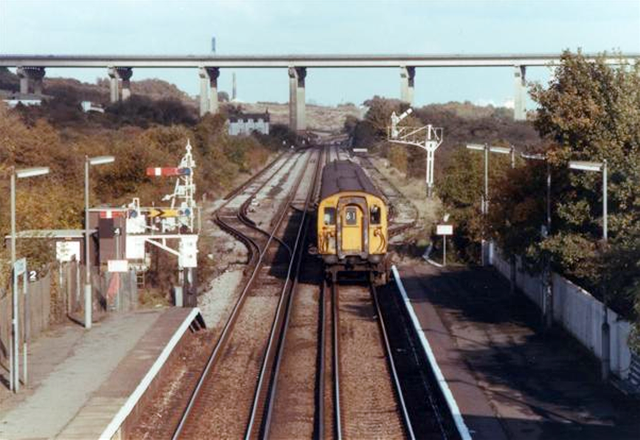 This delightful north-eastward view from September 1983 shows 4 Cep No. 1550 approaching the ''down'' platform at Cuxton, forming the Strood to Paddock Wood service. On the left can be seen the electrified freight loop installed in 1961, complete with a once electrified siding on the right-hand side. In the background can be seen the single viaduct carrying the M2 over the Medway. Today, there are now three: two for the road, and one for the CTRL. © Chris 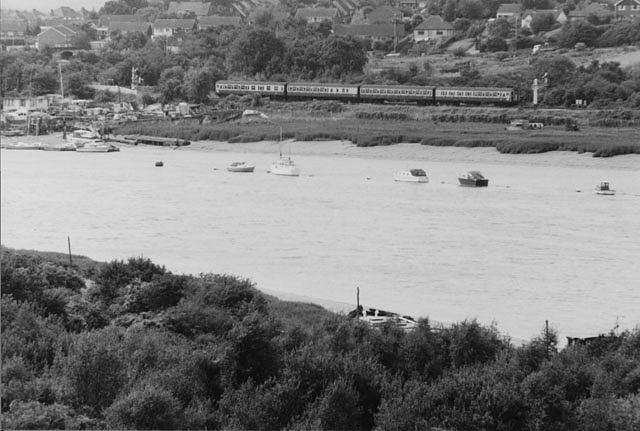 A view across the Medway reveals the northern end of Cuxton's platforms on the left, as a 4 VEP departs for Strood with the Medway Valley Line shuttle service. © Chris