Today, the Isle of Grain is a peculiar environment. Barren marshland constitutes the bulk of the island and the Hoo Peninsula, making it the type of location where one would not want their vehicle to break down in, especially during poor weather. As the meandering road embarks on Grain, a sudden burst of industry emerges, some of it even redundant. It was the South Eastern Railway which set the foundations of civilisation out on this bleak terrain, when it began planning a single-track line across the peninsula. This was in response to the London Chatham & Dover Railway’s agreement with the Zealand Shipping Company to transfer steamer services from Ramsgate, to Queenborough on the Isle of Sheppey. The background of this is better explained in the Hoo Junction pages, but in short, this was to deprive the SER of revenues from the joint shipping account which had been set up with the LC&DR, encompassing ports between Margate and Hastings. Three route miles east of Gravesend, the single-track line to Grain was planned to branch off from. The line was opened from what became Hoo Junction, to as far as Sharnal Street, on 1st April 1882. Extension to Grain occurred on 11th September of the same year, which provides a precise date for the opening of the quaint signal cabin here: Grain Crossing. The signal box was just responsible for the diverging lines on the approach to Port Victoria. The only other signal box in the vicinity was an all-timber SER design at Hoo Junction, which controlled the point of divergence. It was in July 1906 when Grain signal cabin was joined by a wooden platform, which became ‘’Grain Crossing Halt’’. This was opened in conjunction with a number of other halts in sparsely populated areas of the bleak marshland, and was a ploy by the SE&CR to encourage local custom to the line. Ten years later, in 1916, the original Port Victoria deepwater railway pier had to be closed as a result of severe wood rot, but a new station on terra firma was provided in its place.

Revenue takings on the Grain branch were continually low, despite the opening of new stations. The Southern Railway, well known for its rationalisation and modernisation of former SE&CR lines, was, however, not going to give up on the line. On 14th May 1932, the company opened a 1¾-mile long branch diverging from the original Port Victoria line at what became ''Stoke Junction'', to Allhallows-on-Sea. In its optimism, the SR doubled the line two years later, hoping Allhallows would transform into a popular holiday resort. Whilst the line across the Hoo Peninsula may have been experiencing a boom in freight receipts since the end of World War I, passenger traffic to Grain was not enjoying similar success. Nevertheless, the opening of the aforementioned spur to Allhallows appeared to coincide with general improvement work, including the replacement of the wooden platform halts along the Hoo Peninsula route with Exmouth Junction-manufactured concrete fabrications.

The Oil refineries arrived on Grain in the late 1940s and took over two thirds of the island, including the former Port Victoria area. Consequently, Grain Crossing Halt was closed on 6th June 1951, but on the 3rd September of the same year, a new island platform to the east of it was brought into use. This was built at the refinery’s own cost and for the convenience of staff, although a standard train served the station, thus public admittance was permitted. Passenger services between Gravesend and the Hoo Peninsula were temporarily halted between 31st January and 2nd March 1953, due to the East Coast floods having submerged parts of the track bed. Whilst the branch continued to handle considerable amounts of freight traffic, passenger numbers to Allhallows continued to be low, so much that the Southern Region reversed the line doubling in 1957. This was then followed by the inevitable cessation of passenger services to both Grain and Allhallows, the last such train running on 3rd December 1961. It also meant that the oil refinery station was short-lived, it only serving passengers for just over a decade. Thereafter, the platform remained and the loops were used for wagon storage. When opened, the refinery station had a brick-built rectangular signal box at its western end, but by this time the original signal cabin of 1882 had for long lost its main functions, it now simply acting as a gate box. The vintage signal box fell into a state of neglect, and for many years had its windows boarded up. However, after the cessation of rail-hauled oil traffic from Grain in 1999, a worthwhile effort was made to restore the structure to its former glory, complete with green trim. The immediate area is from a bygone age: a signal box 1¼ centuries old, traditional crossing gates, and despite the advent of colour lights on the North Kent Line in 1970 and the extension of the Ashford signalling panel's control to the vicinity in 2001, remarkably this freight-only branch retains its semaphore signals. 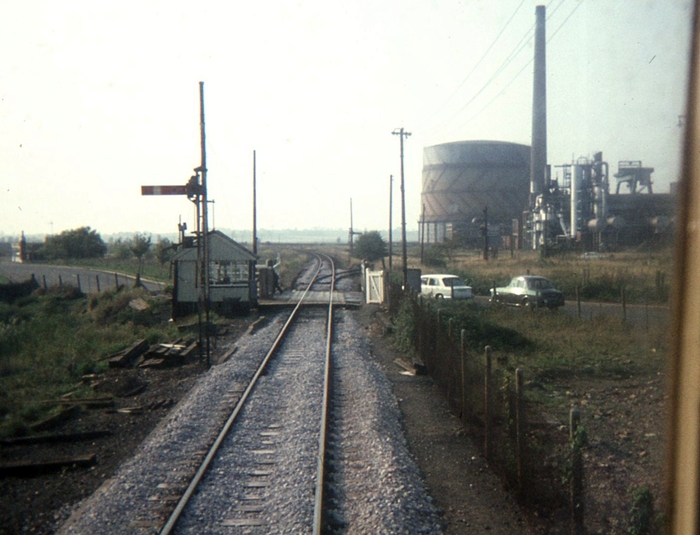 A Triumph 1300 and what looks like either a Riley 1.5 or Wolseley 1500, are seen stopped at the level crossing

gates, as our train waits for the single line token with an oil train for Hoo Junction. At that time, the token

would have taken the train as far as Cliffe signal box, where it would be exchanged for one to Hoo Junction.

The curious siding branching off beyond the crossing, to right, went to a gas terminal. © Roger Goodrum 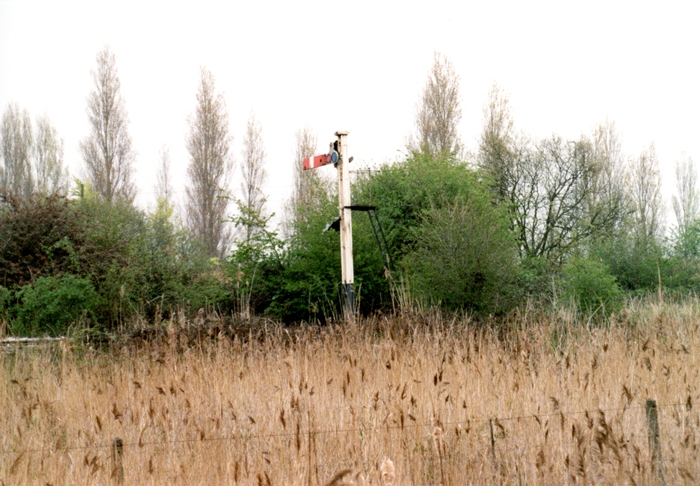 Fast-forwarding to 2006, we see the ''Home'' semaphore signal which can just be seen in the background of 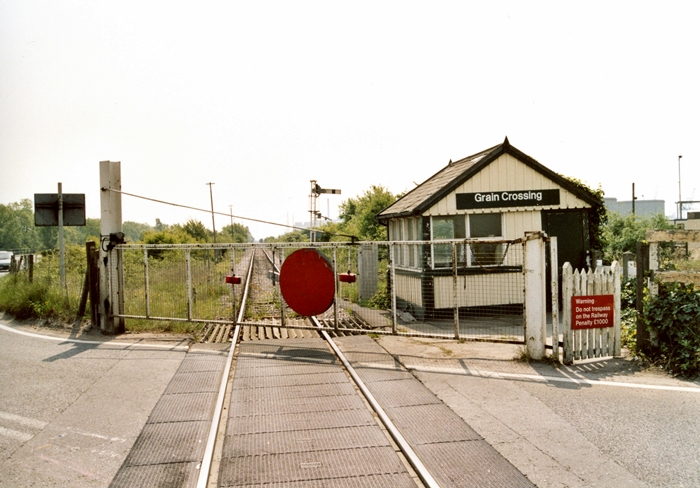 An easterly view on 13th May 2006 reveals the signal box of 1882 origin and a vintage semaphore signal. The

crossing gates were originally wooden, more akin to a farmer's gate, but metal ones replaced these during the

1990s. The platform of Grain Crossing Halt originally sat on the overgrown area of land immediately behind

the crossing gate, on the left. © David Glasspool 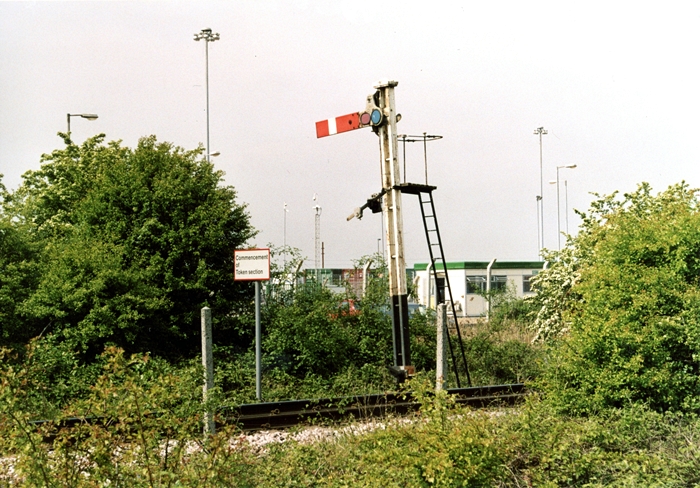 The signal post seen in the previous view is observed in this close-up on the same day. The sign alongside states

''Commencement of Token Section'', this being exchanged at the crossing box. This semaphore is permanently